How to Accurately Assess Culture Fit, Based on My 45 Years of Recruiting Experience

Just about everyone is confused about how to assess if a candidate will fit their company culture.

While getting it right is essential, getting it right starts by defining company culture properly. And the problem is that when you ask people to define their culture, not all of them say the same thing. The reason it’s hard to get agreement is that in most cases a company’s culture is defined by non-controllable factors.

Below are examples that will help clarify this point of view. After decades of recruiting, these are the five factors I believe every recruiter needs to keep in mind in order to determine if a candidate will thrive at a company:

If a person isn’t intrinsically motivated to do the work that’s required, his/her performance will suffer. It’s worse when the work assigned to a new hire is not what was promised or advertised. When a problem like this occurs, it’s often attributed to lack of cultural fit, but the real cause is hiring people for jobs that are ill-defined.

By defining the job as a series of 5-6 KPOs (Key Performance Objectives) and determining how well these match to the candidate’s major accomplishments, problems like this can be minimized. Demonstrating the opening offers more growth and learning in comparison to other situations the person is considering and also helps in the recruiting and closing process.

For a new hire, the hiring manager represents the bulk of the company’s culture. Interpersonal problems with the hiring manager are on par with lack of job fit as the dominant causes of dissatisfaction, underperformance, and turnover. Consider that some managers are great delegators and coaches while others want to supervise everything. Some candidates need and want lots of direction while others want to be left to their own devices.

This managerial fit relationship is rarely considered during the interview but it’s one that’s easily diagnosed. Ask candidates about their best and worst managers to determine how managerial fit impacts the person’s performance. Then compare this to the hiring manager’s dominant style.

3. The pace and pressure of the business

As shown in the graphic, where a company is on the traditional corporate lifecycle S-curve determines how decisions are made, what resources are available, and the day-to-day intensity of the environment. 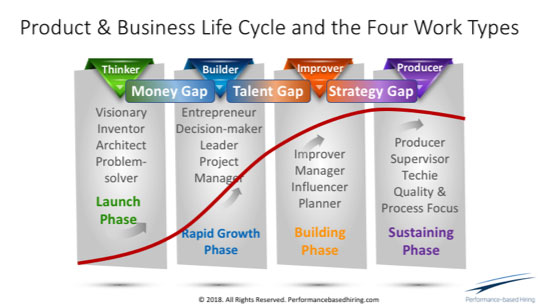 Those who thrive in rapid growth situations will wilt waiting for simple decisions to be made. You can assess a person’s work type by digging into his/her accomplishments and asking about these pace- and pressure-related circumstances. Some candidates are able to adapt to different situations but most aren’t, so you need to get this part right.

I remember long ago when a CFO suggested a candidate I represented was too quiet for his company’s aggressive style. He instantly changed his mind when he learned the candidate had implemented a major IT system with a similar cross-functional team under more challenging circumstances.

To minimize these false and superficial conclusions, during the interview have the candidate describe the teams he/she has worked on in detail and observe the growth in size of these teams over time and the person’s role. Then ask why and how the person got on the team. Done properly, you’ll quickly be able to determine team fit.

If you’ve ever been through this situation, you know that companies that are struggling financially have a culture all their own, despite the corporate value statements posted on the wall. In a similar vein, companies backed by private equity or venture capital have their culture defined for them at least with respect to the strategy, the budget, the pace, and the decision-making process. When hiring someone for these types of companies, you need to make sure the person can succeed in an environment of limited resources, quick decision-making, and limited direction.

Collectively, these factors define at least 70-80% of a company’s culture. The rest is what’s written on the posters, the unspoken politics, and the quality of the company’s leadership team.

Despite the challenges involved in accurately assessing ability and fit, including overcoming interviewer bias, by asking the person to describe her/his major accomplishments and asking about the manager, the job, the team, and the pace you’ll have all of the evidence needed to make an accurate hiring assessment.

As you’ll discover, while assessing ability is straightforward, it’s getting these fit factors right that will determine if the person is successful or not.