7 Impactful Ways to Combat Sexual Harassment in the Workplace

Everyone deserves to feel safe, comfortable, and listened to at work. But as the #MeToo movement has shown, not every employee feels this way. Sadly, incidents involving sexual harassment and even assault are disturbingly common in the workplace. And when bad behavior goes unnoticed, productivity, retention, and morale suffer.

But things are changing: according to survey results from LinkedIn’s Global Talent Trends 2019 report, 75% of talent professionals say they’ve noticed a change in employee behavior over the last two years. More than ever, people are speaking up. And it’s up to companies to help solidify these positive changes by establishing a culture of respect. 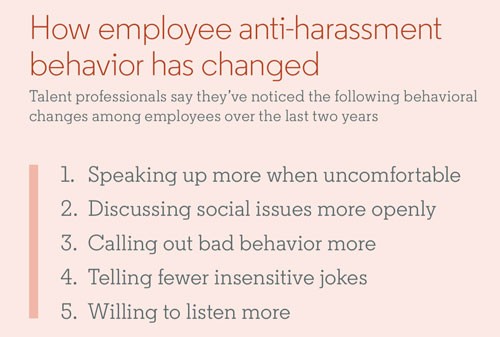 1. Re-examine your current policy: well-intentioned approaches can have unwanted consequences

Some policies that stem from perfectly good intentions may ultimately have a negative effect. Take “zero tolerance.” In principle, it sounds appealing, showing how seriously your company takes harassment allegations. But serious consequences for all incidents may actually make victims less likely to report one, especially if it seems relatively minor. While no amount of harassment is acceptable, not every occurrence is necessarily a fireable offense.

Another example is “forced arbitration.” While this policy has some benefits for companies, it may perpetuate a “culture of silence” where victims of harassment are unable to publicly speak out. This can ultimately leave them feeling isolated and alone while protecting their perpetrators from serious consequences.

Microsoft was one of the first major companies to repeal its forced arbitration policy, and many others have since followed its lead.

It’s entirely possible that your company’s harassment policy hasn’t been updated in years—if you have a formal policy at all. Whatever steps you currently take to combat bad behavior, now is a good time to re-examine your policy or create one from scratch.

Take cues from what other companies are doing and consider scrapping policies that haven’t yielded positive results.

2. Focus on the good and the bad: spotlighting positive behavior is just as important as defining what’s unacceptable

Sexual harassment is a touchy subject, and focusing solely on the bad behavior of others can make some people a little defensive.

While it’s important to define what bad behavior in the workplace looks like, talking about good behavior can also have a positive impact. It helps set expectations and makes the discussion more relatable for people who haven’t done anything wrong and might otherwise feel like they’re being accused of something. It also sets a standard to strive for, which can make the conversation more positive, without shying away from the serious issues.

Using Emtrain’s Workplace Color Spectrum is one way to emphasize the difference between good and bad behavior, as well as the fuzzy areas in between. Using a color scale of green, yellow, orange, and red to categorize different behaviors helps create a universal language around the issue that everyone understands. It can also make it easier to speak up (like saying a coworker's joke was a bit “yellow”).

3. Respect reporting preferences: offer different ways for people to come forward to increase the likelihood that they will

People’s comfort levels around reporting harassment can be very different. While some may feel comfortable walking into their HR rep’s office to report an incident, others may be terrified at the prospect. That’s why it’s a good idea to offer multiple ways for victims and witnesses to come forward.

Make it easy for employees to report harassment however they feel most comfortable, whether that’s in person, by phone, in an email, or using an online form. Be sure to let people know that all these options are available to them. If you’re concerned about potential conflicts of interest, you might also want to consider using a third party to field complaints.

4. Be inclusive when discussing harassment: spread the message that harassment can affect many different groups

Harassment isn’t just a women’s issue, although it can disproportionately affect women. Men can be victims of harassment, as can LGBTQ+ employees and other groups.

This type of harassment can be underreported, and non-traditional groups may feel embarrassed to come forward about it. That’s why it’s so important to be inclusive in your messaging about harassment so that employees know that no kind of harassment is acceptable and that anyone can report it.

Ensure that managers know how to react to any report of harassment, no matter who the victim is. It’s vital that managers and leaders react appropriately to reports of non-traditional harassment to prevent potential stigma from silencing victims.

If you’ve never experienced something yourself, it’s harder to grasp what it really feels like. Interactive teaching sessions can help bridge the experience gap for employees, giving them a clearer idea of how serious harassment really is.

Break employees into groups for role-playing exercises, or hire actors to play out common scenarios. Then, open the floor to discussion, like what employees would do if they saw a similar situation unfolding in the workplace.

It can also be very powerful for leaders to share their own stories at the start of a training session, whether the anecdote involves harassment they witnessed or even something that happened to them. This creates trust among employees, signaling that they’re in a safe space where they can talk openly about these issues. It can also build empathy, since it’s easier to understand the effects of an issue when it’s happening to someone you know.

To create a true culture of respect, accountability is essential. If issues are always dealt with behind closed doors, other victims may feel unsure about coming forward, because they have no way of knowing if reports are taken seriously.

Publicly responding to inappropriate behavior and demonstrating that there are real consequences can act as a deterrent to others. More importantly, it demonstrates to both employees and the public at large that your company doesn’t tolerate harassment.

It’s better for the company to face some short-term embarrassment than let a problem grow bigger through inaction. Ultimately, your employer brand and company culture will be stronger for doing the right thing.

7. Follow up: show victims you care by reaching out, even after your legal obligation is fulfilled

Talking about harassment can be very difficult for victims. Show them that you really care about them by reaching out even after your company’s legal obligation is fulfilled.

Even a quick check-in email or call can be incredibly empowering and meaningful for people. Ask them to share their perspective on how the incident was handled and how they think the company could do better in the future. By going above and beyond like this, you may encourage other victims to come forward.

Little things add up: start taking steps toward creating a harassment-free workplace, and employees will follow your lead

Cultural change comes from the top down. Showing your company’s dedication to stamping out harassment and building a culture of respect lets employees know that inappropriate behavior has no place at work. This can prompt small behavioral changes that help create a happier, safer workplace for everyone.