How Eventbrite Recruiting Increased Its Response Rates by 20% with Fun, Authentic Content Marketing

When you’re shopping for a major purchase—a new phone, let’s say—chances are you don’t just compare features and prices. Yes, those things might factor into your decision, but let’s face it: you already have a pretty good idea of what your options are and you probably have a loyalty to certain brands.

That’s the power of great marketing. And it’s something that recruiters don’t always harness—but they should, as Eventbrite’s Erin Momont and Mike Bailen argued at LinkedIn Talent Connect 2016.

When Erin (Senior Recruiter at Eventbrite) and Mike (former Director of Recruiting) joined the company, they faced a mountain of challenges, including fierce competition and difficult roles to fill. To stack up against bigger names with bigger budgets, they partnered with then Eventbrite’s Senior Manager of Employment Brand, Deniz Gültekin, to leverage a unique content strategy, telling true and compelling stories that highlighted the pillars of their company culture in order to attract talent.

Their strategy was disruptive and risky, but it paid off tremendously. Here’s how they pulled it off.

When Erin and Mike first came to Eventbrite, they quickly became part of a major change in the company’s approach to recruiting. It was a necessary pivot for a company facing a lot of recruiting challenges.

Eventbrite needed to significantly scale its sales organization—and build a brand-new sales team from the ground up in Nashville. But they faced three major challenges: a hyper competitive market for sales talent in the Bay area, a relatively small budget compared to competitors, and relatively low brand recognition. After all, most people know Eventbrite as a self-service ticketing platform—and probably don’t even understand why the company would be seeking tech sales talent.

Tackling these challenges head on, Erin and Mike quickly realized that great salespeople mostly weren’t looking for jobs. To attract them, they needed a way to connect talent with the company’s mission—to get people to come to them.

In other words, they realized what Eventbrite really needed to attract great candidates was to tell its story—authentically, genuinely, and in a way that would inspire candidates to think fondly of their company and brand.

To accomplish this, Deniz and Erin developed a marketing playbook based on building affinity with top talent. Affinity is critical for gaining attention for what your company is doing—whether it’s your products or your culture, your customers or your candidates. It’s the reason adults still crave McDonald’s or feel nostalgia for their old toys—a positive connection with a company or brand that endures for many years.

Here are the steps they took:

To tell Eventbrite’s story, Deniz and Erin had to figure exactly what it was. So they sat down with the sales team, aiming to find out what differentiated Eventbrite and what made its culture unique.

They came back with three major pillars: First, at Eventbrite, sales people get to sell into an industry that people are really passionate about—music and events. Second, there’s a culture of mentorship and development there, unique in the cutthroat sales word. Finally, they discovered that Eventbrite fosters a collaborative, “tribe” culture that values cooperation over competition.

2. Next, they took a journalistic approach to telling this stories

From there, Deniz and Erin looked to tell that story with content that gave their online followers a look into Eventbrite’s unique culture, focusing on the three pillars above. But they knew the strategy would only work if the stories were authentic and genuine.

“Smart people can smell bs a mile away,” says Mike, putting it bluntly. 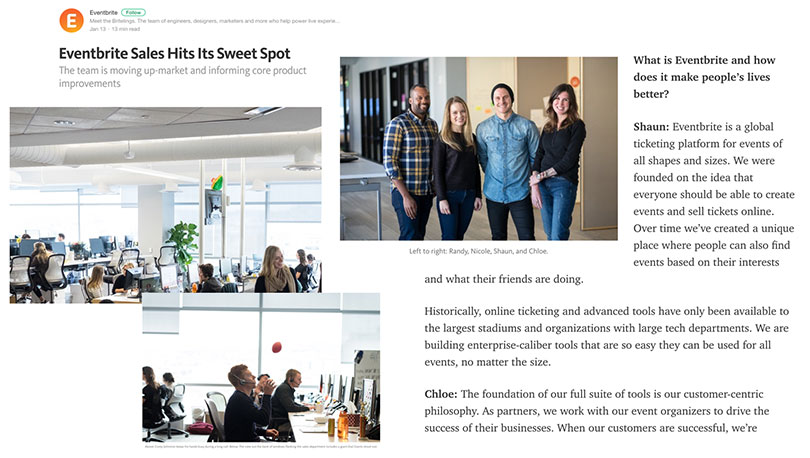 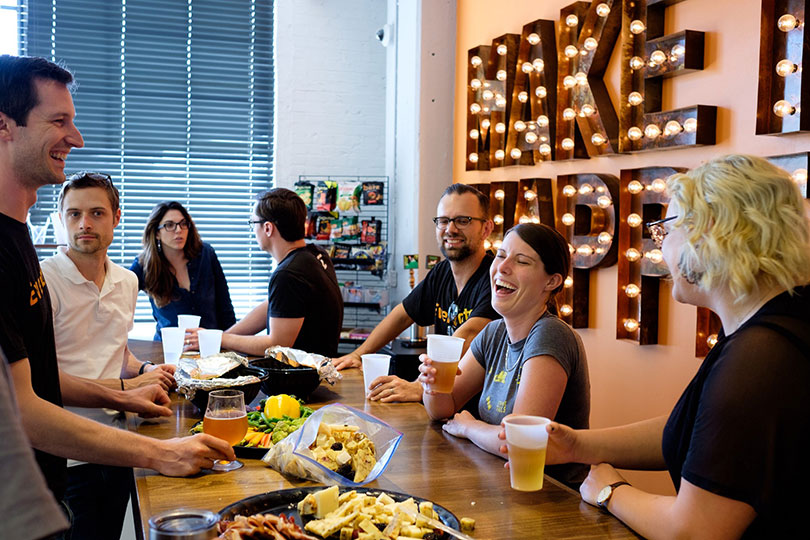 They found that to tell true stories that highlight company culture, you must first learn to think like a journalist. Eventbrite’s team took that one step further by actually partnering with a third-party company—comprising a journalist and a photographer—to help them document the great stories at their company, like this recent story about their fun and quirky music team or this one highlighting their growing Nashville crew. 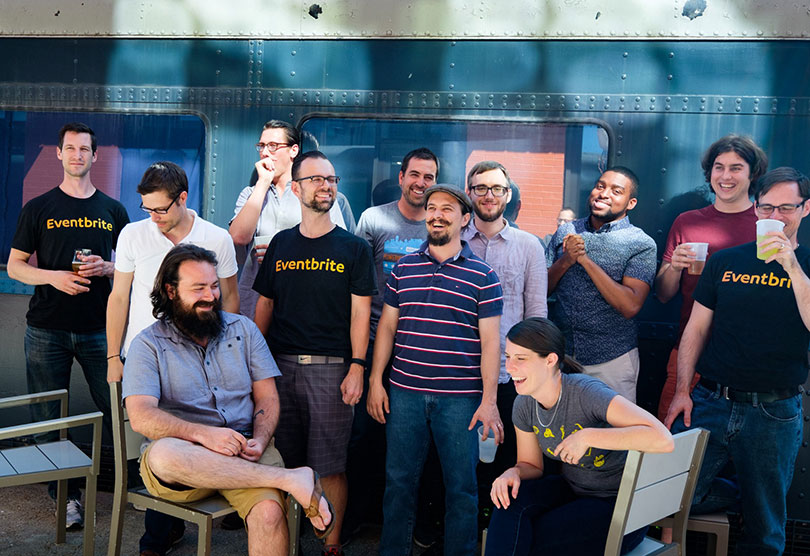 In the process, they learned another important lesson: if you want genuine stories about your company culture, you can’t force it. Luckily, you also shouldn’t have to—if you put a call out, you’ll find that plenty of people are willing to come forward on their own.

“Find people who are really excited and volunteer to [tell their stories],” said Mike. “People like to talk about themselves. They get a sense of pride when they can show off their work.”

3. Put Eventbrite’s story in front of the right people

Simply writing good content and publishing it isn’t enough, however. You need to make sure your work is actually getting read by candidates—or at the very least, by somebody they know and trust who can then pass it along to them.

To give their stories an online life, Deniz turned to external channels like Medium, a highly social and shareable platform for longform writing. Even though Medium doesn’t give authors the same control as hosting their own blog, it comes off as authentic—largely because the posts read more like real, published articles, yet can still spread like wildfire on social media (plus the SEO appeal was hard to bypass).

To cast a wider net, Erin, Mike, and Deniz embedded links to their stories in Eventbrite’s job descriptions, and used targeted messaging tools to reach the right people on LinkedIn and Facebook.

They also found creative ways to get the articles in front of even more eyeballs, like working with the PR team to get it included in local content (including The Tennessean, the local paper). They even mobilized the CRO and CEO to push the content out to their networks, setting the tone for the rest of the company to do the same.

4. Repurposed long-form content in job descriptions, on social, and more

After a bountiful and delicious Thanksgiving meal, you usually have plenty of leftovers. And that extra turkey doesn’t just get thrown away—it gets repurposed as turkey sandwiches, turkey chili, and more. Great content is the same way—you can publish it once, then use it over and over again for other purposes.

In fact, one of the reasons Deniz  chose to invest in great longform articles was the potential for “turkey”-ing that content—recycling and repurposing it to suit future needs.

And Eventbrite’s recruiters have found plenty of ways to do that, like baking links to the content into their job board postings. They’ve also sprinkled quotes from the articles across their Facebook and Twitter pages—and recruited their best advocates to share them. Deniz  even begun sending out quarterly content newsletters to previous applicants, or people who’ve chosen to “keep in touch,” as a way of nurturing prospective hires.

Eventbrite’s articles have seen great social results, and their Medium page has amassed thousands of followers.

The recruiting teams use metrics to measure the success of each post, knowing full well that it isn’t necessarily candidates who are reading them. (Each one features a light CTA at the end (e.g., “Join the team!”), which makes it easy for fans of their articles to pass them along to a friend or relative who might be interested.)

And the recruiting results have been most impressive. Erin and Mike significantly decreased their time-to-fill and saw a 100% increase in applications after posting their new content. They managed to fill especially difficult roles in their San Francisco and Nashville offices; one candidate even told them that their articles got them “over the finish line” when considering Eventbrite.

They also reached back out to 200 previously sourced candidates—none of whom had been interested in the job the first time around—and saw an amazing 20% lift in response rate.

The best part? The candidates who’ve come to Eventbrite through their content channels have consistently been great hires, reaching their quotas and achieving nearly a 100% retention rate in the last year.

Eventbrite’s message is clear: content creation isn’t just for marketers anymore. By telling your company’s stories in an authentic, fun way via social channels, recruiters can build meaningful connections with candidates over time—and that makes all the difference when there’s a role to fill.

To hear stories like this one live, join us at Talent Connect 2017 in Nashville.