The beer test. You know it? It’s hiring candidates based on whether you’d want to grab a beer with them. Sure they can probably do the job, but the real question is whether or not you can see yourself hanging out with them.

The beer test, much better known as hiring for “culture fit,” is often times the final screen to whether or not someone gets an offer letter.

There’s just one problem — hiring for “culture fit” often gets in the way of increasing diversity. If you assume that people who don’t look or act like you won’t mesh with your organization, then you end up choosing people who are too similar to yourself. This then leads to complacency, lack of innovation, and underperforming teams in companies.

That’s why Pandora looks for “culture add” in candidates instead —new and unique skills and viewpoints that don’t already exist at the company. “Culture add” means shaping the culture rather than fitting into it. According to Lisa Lee, Director of Diversity and Inclusion, and Marta Riggins, Director or Employee Experience and Marketing, we all need to stop using the phrase “culture fit” to better hire and retain a more diverse workforce.

Pandora has been able to adopt this “culture add” mentality by building an integrated B2E (business to employee) strategy, elevating programming around inclusion, and scaling its efforts through cultural storytelling. As a result it has impressive diversity stats and ambitious goals for the future, both of which will make its business better.

Diversity at Pandora is not a separate strategy, rather it’s embedded in everything the company does. Their strategy has a digital, events, and training component, and here are examples of each: 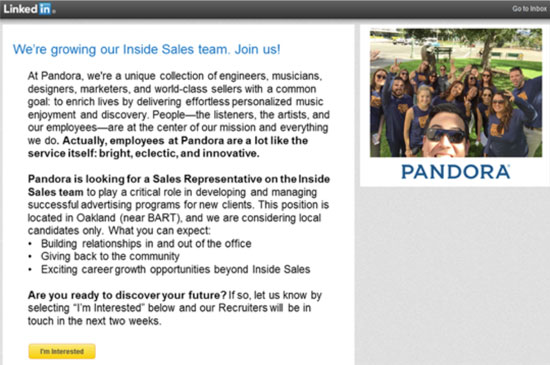 At Pandora, diversity isn’t enough – the company strives for inclusion too so that employees feel their diverse perspectives and opinions are valued. Here are three ways to foster inclusion:

Live events are hard to scale with 46 offices, so Pandora launched an internal podcast for employees to share their experiences more widely. From the new dad talking about paternity leave to the LGBTQ+ employee talking about coming out, People of Pandora is a safe and authentic place where employees share how personal circumstances shape their work. In early 2017, the People of Pandora podcasts will be available to all listeners on Pandora’s platform.

As gatekeepers of your company, it’s time to ban “culture fit” from your lexicon, argue Marta and Lisa. When you do hear people say it, probe them. What does it mean when someone is not a culture fit? It’s up to you to start changing the conversation and invest in building cultures of inclusion.

This post is based on "Culture add is the new culture fit: How to attract and retain diverse talent in today’s marketplace" presented at Talent Connect 2016. See Lisa Lee and Marta Riggins' full presentation below: