The video game community isn’t known for its gender diversity. With women making up just 22% of all game developers internationally, the industry really needs to welcome more women into the workforce.

One company breaking that mold is Blizzard Entertainment, publisher of games like World of Warcraft and one of Fortune’s 100 Best Companies to Work For in 2017. By focusing on recruiting women into its paid internship program, Blizzard increased its number of female “Blizzterns” by 166% in the past year – from 12% to 32%, and plans to bring on even more next year.

Janine Tedford, Blizzard’s Associate Manager of University Relations, likens their gender diversity push to a stampede of penguins sliding down a snowy ice shelf—once the first group of women went for it, an avalanche of other interns followed.

Importantly, Janine says, Blizzard’s intern program isn’t just meant to be a stepping stone to another company, but “the destination.” Blizzard often routes interns into the new grad program—where new hires excel, on average getting promoted to the next level faster than other entry-level hires. 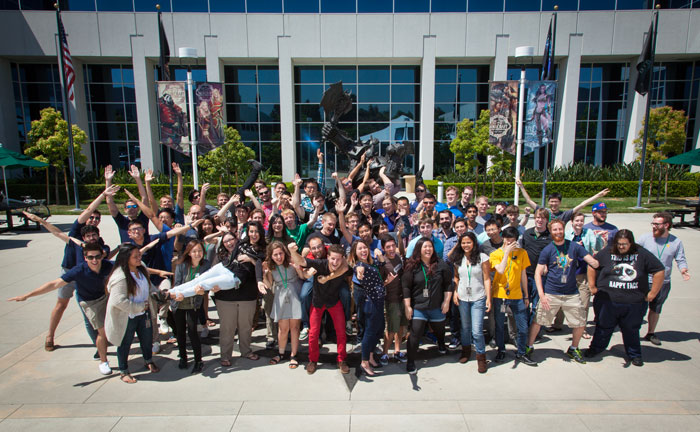 Here are five tactics that Blizzard used to level-up its gender diversity via university recruiting — and how you can apply them to your own hiring efforts.

1. Asking yourself the hard questions: Why is your company struggling with gender diversity in the first place?

Janine advises that companies start by looking inward and daring to be self-critical. Blizzard had to ask why they were having a hard time hiring more women, identify the problem, and attack it with a targeted solution.

Focused on finding the best interns quickly, the university relations team had tunnel vision and wasn’t going out of its way to source women—they hadn’t stopped to ask why the places they were looking were so dominated by men.

Simply bringing the issue to their attention went a long way towards re-evaluating the university recruiting tactics they took for granted.

2. Seeking out women-led groups on campuses and telling them about your opportunities

Taking a more thoughtful approach, Blizzard started asking their own female employees about what kind of clubs they participated in as a student. Instead of simply going to the same groups on campus year after year, they sought out women-led groups and clubs, like the “Women in Computer Science” club.

If what you’ve been doing has resulted in a lack of diverse applicants, don’t be wary about going out of your way to be more inclusive. Talking to current female employees can help you generate ideas on where to find more representative communities you can invite to your internship or new grad program.

3. Identifying professors who teach relevant classes and asking them to refer and recommend exceptional female students

Sometimes the easiest path is just being direct and asking for what you want. Blizzard found faculty who taught classes related to their internship program—from computer science to marketing to business administration —and asked for recommendations.

Blizzard’s university recruiting team asked about their top-performing students across the board—and wasn’t afraid to specifically ask about the most promising women. Professors are almost always more than happy to highlight students for mentorship opportunities, and can give you the type of personal referral that makes it easy to find the perfect candidates.

4. Enlisting female employees to speak to students at their alma mater

Blizzard found that current employees were always thrilled to visit their old stomping grounds. “Not a single person said no when we offered,” says Janine. While this is something Blizzard does with both its men and women, this year they put a bigger emphasis on asking female workers to share their stories at their old schools.

Having a female employee as an ambassador of your company can inspire young women and challenge their stereotypes, especially if you’re working in a field that tends to be disproportionately male.

Companies with strong employer brands often share a similar mantra: “everyone’s a recruiter.” Getting your current employees to share their experiences—especially the experience of being an underrepresented minority in your field—can encourage and reassure more diverse students to apply.

5. Tweaking your employer branding to skew towards more diverse audiences

When students think of jobs at Blizzard, they usually imagine game developers—but that’s just one position of many. To appeal to a broader audience, Blizzard emphasized how the company does so much more than make games: from business operations to program management to graphic design.

Along with amplifying these areas in their branding materials, Blizzard’s UR team also sought out more diverse student groups who may not have considered a gaming company—like clubs interested in business intelligence, marketing, web design, and user experience.

Towards the end of last year, one of the female interns told Janine how much she enjoyed the experience, but said she was disappointed in the number of women in the internship program. “That intern actually returned this year,” says Janine. “When I told her how many women we were bringing in this time, she was over the moon! She’s so excited to mentor some of the younger ones, show them the ropes, and build new friendships.”

Like Janine’s proverbial penguins, diverse interns and employees encourage others to join them. Female employees in underrepresented industries support each other—once you make an effort to build a more diverse team, it gets easier and easier to attract more diverse talent.