Your company can say it wants more “diverse talent,” but you can’t leave it at that. While diversity sounds great and it’s easy to champion in the abstract, it can also be a fuzzy, feel-good band-aid that substitutes for more serious, uncomfortable conversations.

Diverse talent can mean women, underrepresented ethnicities, LGBTQ+ people, veterans, different economic backgrounds, or an intersectional mix of any of these communities—but if you just target “diverse talent” as one big group, you’re not really addressing any of them. 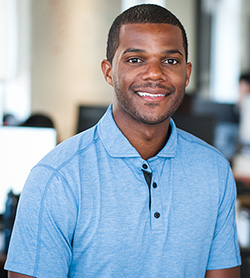 “A lot of companies fall short when they try to overcome their diversity challenges because they’re not really addressing what their actual pain points are,” says Porter Braswell, the Co-Founder and CEO of Jopwell, a career/recruiting platform for Black, Latinx, and Native American students and professionals.

A company that recognizes it needs more Black and Latina women, for example, will be more successful than a company that only says it needs more diversity. “You’re going to have to have an uncomfortable conversation to get down to what you really mean by diversity,” he says.

That’s just one of Porter’s many practical, no-nonsense insights—and he’s got plenty. In 2014, he left his job at Goldman Sachs to co-found Jopwell. Since then, he’s helped employers like Lyft, BlackRock, the NBA, and Pinterest reach a rich pipeline of diverse talent.

Here are five hard-nosed, brass-tack tactics from Porter to help you move beyond talking points and start making a real impact in diverse hiring.

1. Unconscious bias training can be a good first step, but it only brings people to the table—it doesn’t solve the problem

Despite leading the most well-funded diversity hiring startup, Porter doesn’t like to talk about unconscious bias too much. It can facilitate uncomfortable conversations about diversity, but that’s only the very first step. Unconscious bias training alone isn’t very effective.

It’s most useful as a tool to get everyone on the same page—and it can backfire if it makes people complacent. “It shouldn’t be used as a cop-out, you shouldn’t say ‘that’s why it’s like this and there’s nothing we can do,’” Porter says. “It’s less of pointing the finger, and more welcoming people into the conversation—to get comfortable having these uncomfortable conversations.”

“It serves that purpose, but by no means does it go far enough,” he says. “It’s not a solution.” A discussion of unconscious bias can create the space to have more substantive talks, but it doesn’t move the needle in and of itself.

2. Get specific about what you mean by “diversity”

As we discussed at the top, lots of companies say diversity is a recruiting priority, but fail to get more specific. “It’s easy to say you want diverse talent,” says Porter, “but that can mean a lot of things.” Take a serious, unflinching look at your workforce and identify what populations you’re lacking and where you need to improve.

But Porter admits that even Jopwell won’t do much for employers who haven’t gotten to this step. “Organizations that have no idea on what they mean by diversity—that haven’t thought about it before coming to us—aren’t going to find the most success with us,” he says.

3. Tailor your hiring strategies to your specific diversity needs with these programs that bolster pipeline and retention

Once you’ve clearly identified your needs, it’s much easier to create intentional, targeted hiring strategies. Porter says the companies they work with that do the best job recruiting people of color usually have programs aimed both at hiring and supporting new employees once they’ve joined the team.

“They have entry-level hiring programs aimed at college students, along with training programs, employee resource groups, and mentoring networks,” he says. The most effective organizations seem to put an emphasis on entry-level talent, in his experience.

“The companies that focus on entry-level recruiting—getting classes of individuals and giving them the resources to succeed—do the best, by far,” Porter says. “They’re the most intentional, they can get the most out of partners like Jopwell, and they’re doing more than just talking, they’re actually implementing things that make a more inclusive workforce—that’s good for everyone, and it’s good for business.”

It’s just as important to support your diverse candidates after a hire. “You can have a really leaky pipeline if you just focus on recruiting but ignore retention,” Porter says. “Your numbers will never change.” Employee resource groups and training programs ensure they feel welcomed and set up for long-term success.

4. Champion the cause to get buy-in from executives—they’re already primed to say yes

The best way to get buy-in from the C-suite is to make a strong business case, but Porter says most companies are already up to speed on this. They’ve heard about the McKinsey studies showing that ethnically diverse and gender-diverse teams outperform their competitors.

“You can almost bypass the conversation of why diversity is important, we’re beyond that, companies now know,” says Porter. Instead, executives need someone who can champion the cause and develop targeted strategies.

Championing diversity can also be great for your career, if you’re truly passionate about it. As a recruiter, you’re well-positioned to make an immediate impact. “If you become an internal diversity champion and fight for more inclusive, diverse populations—especially if you’re from a majority community—your voice can really be heard,” says Porter. “The senior-most levels are already having these conversations, they care about diversity: if you’re authentic about it, there’s nothing better you can do for your career.”

5. Take an honest look at your employer branding in diverse communities

Finally, Porter cautions that companies shouldn’t take their employer brand for granted. “A lot of companies think that their brand is known to our community of Black, Latinx, and Native American candidates,” he says. “Even if your brand is known, nine out of ten times nobody really knows what you do.”

“This is a really important thing that pertains to diversity: how you do authentic employer branding to get that information in front of our audience,” he says. Your company might have broad brand awareness within corporate America, but that doesn’t mean diverse communities know about you—especially if few people from that community work there.

“That’s a large part of what we focus on at Jopwell,” Porter says. “It’s not just jobs: it’s employer branding, authentically engaging with this audience. Once you’ve built trust within the community, then you can show them job opportunities. Companies need to be more intentional about explaining their story to these communities.”

We all want to do the right thing, and just about everyone likes the idea of a diverse workforce. The challenge is that it’s easy to get complacent, settling for fuzzy buzzwords and partially thought-out programs.

As Porter reminds us, it’s a good idea to give your company a diversity reality check: get serious about your exact needs, embrace uncomfortable conversations, and come up with specific plans to better connect with these communities.

You can make a real impact on your company and your career—you just need to be courageous enough to take the lead, clear-eyed enough to confront your company’s shortcomings, and dedicated enough to make a difference.

*Image from The Jopwell Collection