Why Using Data Is Your Key to Increasing Diversity, According to This Tech Leader

Twelve years—that’s how long it took Leslie Miley to work with another black person in a high-level engineering role.

“I’ve been black in tech for a long time,” says Leslie, who has worked for the Obama Foundation and was an engineering director and manager at Slack, Twitter, Apple, and Google. “And I’m going to continue to be black and continue to speak out against inequities.”

Doing that hasn’t been easy. He believes speaking out about diversity has hurt his career, and he’s not alone: studies show that people of color and women are penalized for promoting diversity, while white men tend to get rewarded for the same behavior, Leslie explained at LinkedIn’s recent Talent Intelligence Experience in New York City.

It takes courage to push for diversity, but using data—which comes naturally to an engineer like Leslie—has helped him drive change. While arguments for diversity are sometimes dismissed as too emotional or not urgent, data can help you make a powerful case that leads to progress.

“It’s about using data to make workplaces more inclusive and equitable,” he says. Here’s how Leslie says bias impacts hiring, promoting, performance reviews, and retention—and how you can use data to speak courageously and promote diversity.

Referrals are the source for one-third of all new hires—but they’re not the best for diversity. If you already have a less-than-diverse workforce, employee referrals are “the fastest way to build a monoculture,” says Leslie.

2. Increase promotions of women and people of color by providing an equal amount of mentoring opportunities

Men and women of color often struggle to advance in their careers due to bias. “I did everything prescribed but couldn’t get promoted,” Leslie says.

As a result, leadership tends to be far less diverse than entry-level employees. The higher the ranks, the less women and people of color you see. 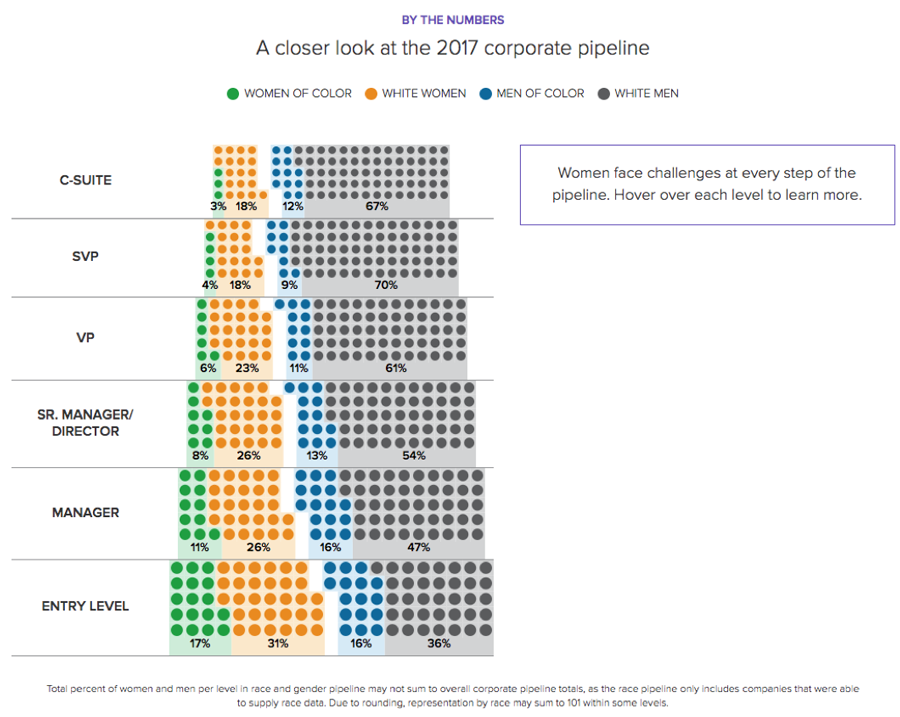 There’s a huge drop off in the proportion of women of color when you go from entry-level employees (17%) to managers (11%) and even less in positions of senior managers or directors (8%), vice presidents (6%), senior vice presidents (4%), and C-Suite execs (3%).

One reason may be a serious lack of mentorship. Shockingly, only 36% of women of color say that their managers even give them advice on how to advance at work. Those who do receive coaching, however, are more likely to move up the corporate ladder, according to a Women in the Workplace report.

That points to a clear solution: companies must provide more mentorship opportunities for women and people of color to help them advance. As the Women in the Workplace report advises, “Organizations need to make sure managers have the know-how to support women’s career development. They can also invest in formal mentorship and sponsorship programs to provide additional guidance.”

There’s a major problem with how women are described in their performance evaluations. Harvard Business Review examined over 81,000 evaluations and found that while negative words are rarely used to describe men, that’s not the case for female employees.

While men were most described in positive words, there are a slew of negative terms attached to female employees, including being “panicky,” “vain,”  “indecisive,” and more. 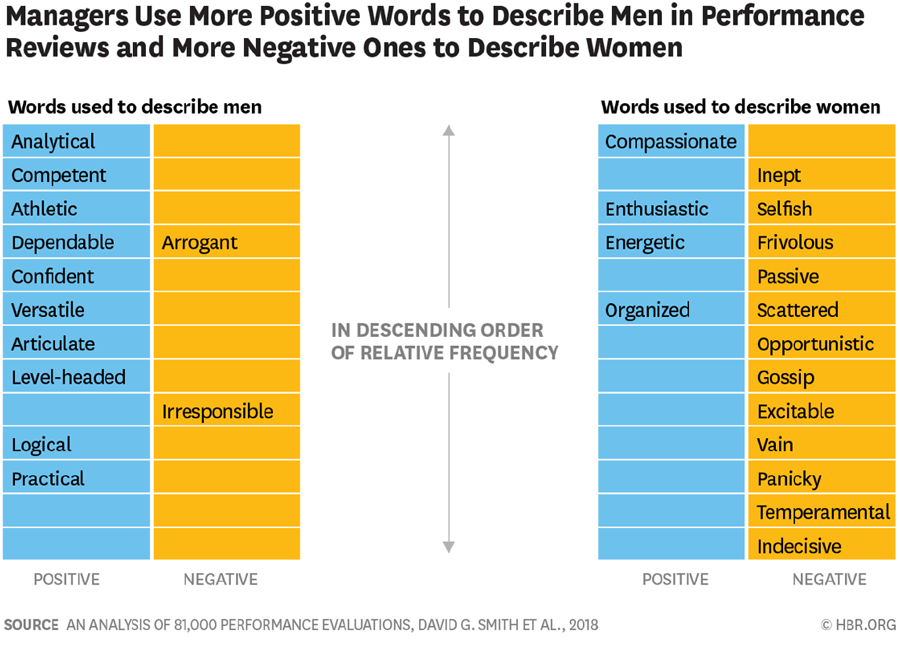 Leslie describes these performance evaluations as “kryptonite” for women and people of color because “every part of bias,” including subconscious and conscious bias, shows up in these reviews.

And, there are even worse things happening for women and people of color who push for diversity at their companies. “Leaders of color with high diversity-valuing behavior received lower performance ratings and were perceived as significantly less competent,” says Leslie.

Leslie offers the following tactics for recruiters who want to use data to curb bias during these evaluations:

Women and people of color also tend to quit their jobs at a higher rate than their peers. A study by the Attrition and Retention Consortium and a paper under review at the Journal of Applied Psychology found that African-American and Hispanic employees had higher predicted quit rates (4.79%) versus white employees (3.73%). The quit rate for minority women was 5.42% over five years.

“When you see people of color leaving at higher rates, you can’t just chalk it up to nothing,” says Leslie. “You need to change something in your organization.”

Companies have to be courageous to push for inclusive, equitable workplaces

Companies can’t only rely on women and people of color to raise the issue, especially because they’re disproportionately punished for it when they do, says Leslie. It takes courage for those employees to speak out.

Leaders—disproportionately white males—should draw on the courage of those employees. “Challenge them to be courageous and help them be courageous,” says Leslie. “It takes courage to be transparent, to admit you don’t have the answers, to set targets, and to be held accountable.”

Data alone won’t change anything—you need to have the courage to share it. “All of you," he says, addressing the room of talent acquisition and HR professionals, "have the opportunity to talk to your company, to share this data, and to share it broadly,”

“By not sharing it, by keeping it hidden, it’s akin to watching your neighbors call the police on the black kid doing nothing, or standing by while you see someone being abused,” Leslie says at the close of his talk. “I implore you to take this data and share it—it’s good for your business and it’s the right thing to do.”