To Hire More Women — Make This One Simple Change

Today is International Women’s Day, the perfect day to commit to hiring more women and building a gender-balanced workforce. Of course, every other day would be perfect too.

This change can start with you, recruiters. You shape the candidate pipeline and control who the hiring manager sees. So our all-important tip is this . . . open more profiles of women when you’re sourcing.

Sounds simple? It may well be. But we’ve discovered that it’s not currently the norm. When recruiters search on LinkedIn, they are much more likely to open a man’s profile than a woman’s profile, according to our hot-off-the-presses Gender Insights Report.

When recruiters do open a woman’s profile, however, they are nearly as likely to reach out to her with an InMail message as they are to her male counterpart. So it’s critical to get you looking at more women to start with. 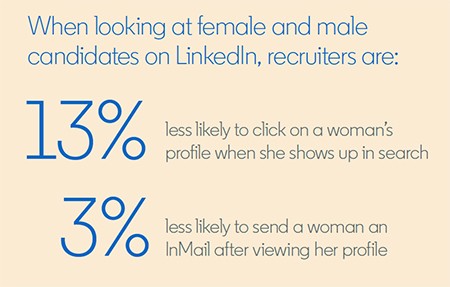 Sometimes, the first step in reducing unconscious bias is to simply bring it to consciousness. Just knowing this data can shift behavior, opening eyes and then opening more opportunities for women. Here are five other tactics for balancing your pipeline and, in the end, your workforce:

1. Analyze your sources of hire

If referrals are one of your top sources of hire, check the gender breakdown of your referred candidates and encourage your employees to be mindful of gender bias. While referrals can be a go-to source of qualified candidates, they also tend to work against women and people of color. A study a year ago by PayScale, revealed that while white men make up just 34% of the U.S. labor market, they accounted for 40% of successful referrals.

Cash works too. Intel increased its referrals for women candidates by doubling the company’s usual bonus to employees for successful referrals. When someone at Intel recommended a woman, veteran, or person from an underrepresented ethnic group who was eventually hired, the employee received a $4,000 bonus.

2. Chart your outreach and response rates by gender

Keep track of which candidates you’re reaching out to, and make sure that the balance of men and women line up with the balance you had in mind for your pipeline. LinkedIn Recruiter can show you how your InMail messages perform by gender. 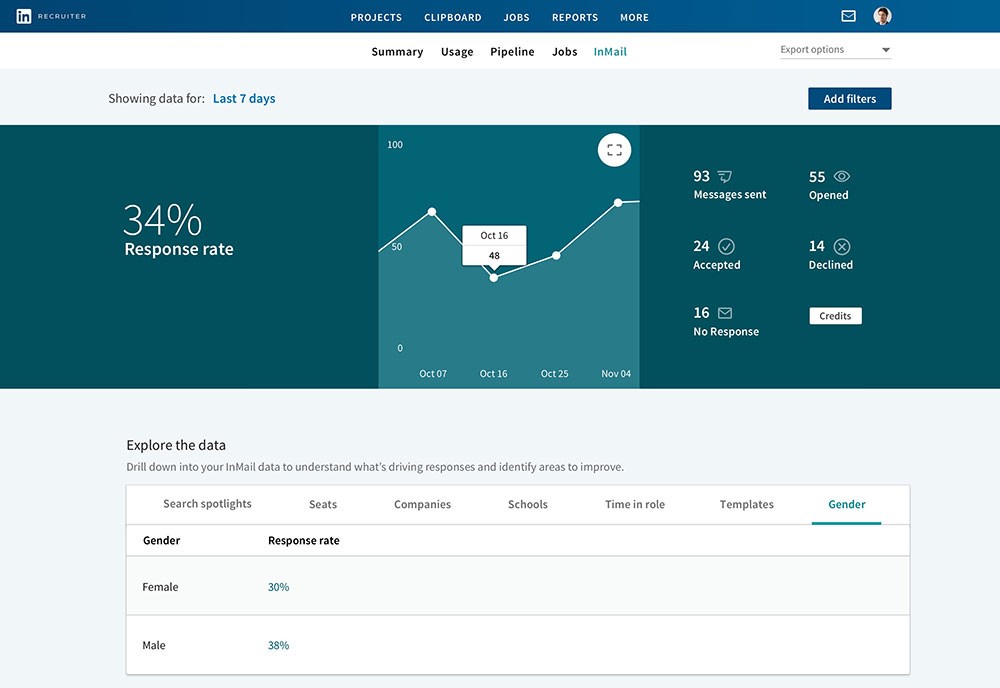 And if you’re finding that men are responding to your InMail messages at a higher rate than women, you can make adjustments to the tone and language in your messages. You may want to recraft your outreach to make it more inclusive and to scrub it clean of the many words — ambitious, assertive, and analytical, hacker, ninja, and rock star — that may be driving away your female candidates.

3. Bolster and fine-tune your employer brand to appeal to women

Women are every bit as interested in your employer brand as men. Which means you have an ideal opportunity to underscore your commitment to diversity by making sure that it’s captured in the photos and stories you share on your Company Page and career site. Showcase your female employees and feature those in leadership positions who can serve as inspiration and role models to women who may be looking to change companies.

4. Be thoughtful about what information you include in your job descriptions

You want your job descriptions, like your InMail messages, to be as free as possible of masculine words that might turn away some female candidates. More importantly, you want to trim your list of qualifications so that it only includes must-haves rather than a laundry list of nice-to-haves. Why? Because women typically will only apply to a job when they meet 100% of the qualifications (as opposed to men, who will generally apply when they meet 60%).

It also helps to be mindful that seniority requirements can reinforce existing imbalances given that women have historically held fewer senior positions. Consider changing your focus from qualifications to the objectives your new hire will be expected to achieve.

Trimming away masculine language and wish-list qualifications will create some space for two things that are particularly important to female job seekers: salary range and pertinent benefits. LinkedIn’s recent job description heatmap study showed that knowing how much a job pays is significantly more important to women than men, which shouldn’t come as a surprise, given the persistent gender gap in pay.

By sharing your salary ranges you signal to women that you’re committed to transparency and fairness. There are also benefits — parental leave, flexible work arrangements, and healthcare — that are more important to women, so be sure to highlight them if you offer them. 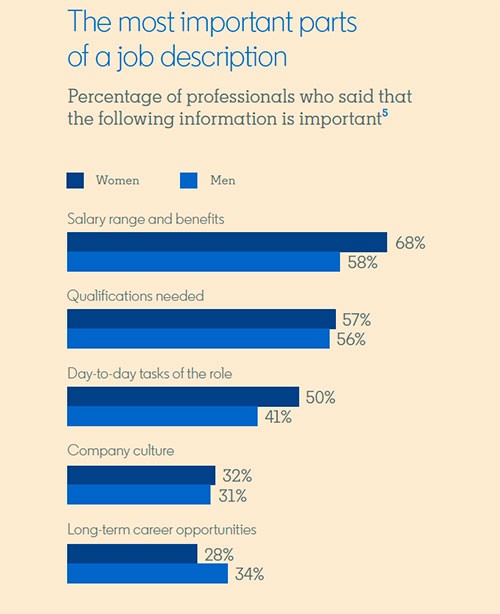 5. Make screening candidates and hiring them as gender neutral as possible

While just being aware that they are more inclined to review men’s profiles than women’s may change the way candidates get screened, some recruiters are taking added steps to level the playing field. For example, more and more companies are adopting blind hiring, removing telltale identifiers like names and photos from applications. LinkedIn Recruiter now offers users an option to exclude candidate photos.

A few pioneering companies have turned to virtual reality technology to combat the unconscious bias of in-person interviews. For example, in the United Kingdom, Lloyds Banking Group uses VR in the final stages of its hiring process, putting candidates into a simulated environment to test their problem-solving skills.

It’s no secret that women still lag behind men in the workplace. They are paid less, referred less often, and promoted less frequently. Now it turns out that their profiles are 13% less likely to be viewed in sourcing searches.

So, if you do nothing else, start opening more women’s profiles. You can help your company get ahead by tapping into the insights, smarts, and leadership that women bring to work. There can’t possibly be a better way to celebrate International Women’s Day.