With a recent Gallup report suggesting turnover in U.S. businesses is a $1 trillion problem, it’s no surprise that companies are increasingly focusing on employee retention. But where many companies get things wrong is in assuming that turnover is a problem that can be solved by intervening after-the-fact.

Instead, recruiters can get ahead of the game by understanding what causes employee turnover and developing interview processes that screen for candidates who are unlikely to stick around for long.

I’ve been able to get a better understanding of why people start looking for new jobs by giving job candidates a 2-minute survey on how job satisfaction impacts job hunting activity. Here’s what I’ve discovered based on the survey results: 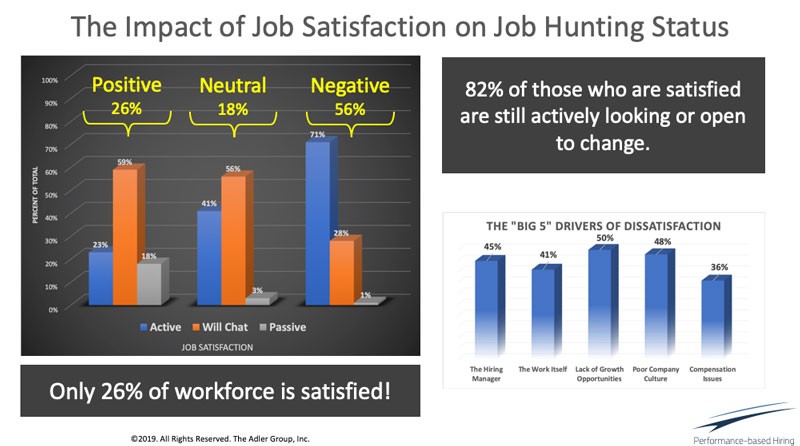 Given this state of affairs, here’s the one rule you should follow to stop turnover before a candidate is hired:

If you don’t implement this rule, nothing will change. You’ll wind up with the same turnover problems 3-6 months after the person is hired for the same reasons shown in the infographic above. Keep in mind that candidates who make short-term career decisions when changing jobs are often just masking the real causes of their job dissatisfaction. By using the interview process to uncover this dissatisfaction earlier, you can then offer long-term solutions (such as a better career trajectory) as the reason a candidate should compare and accept an offer. This is far better than competing on compensation alone.

Here are two ideas for how to start implementing this type of solution:

1) Take money off the table. Before making an offer, I always tell candidates to forget the money for a moment and ask if they really want the job. Most say yes, but I follow up by asking why. If they can’t describe the critical job factors that could cause future dissatisfaction, I don’t make an offer. The factors I’m looking for focus on the actual content of the job, the hiring manager’s leadership style, the quality of the people the candidate will be working with, and specific details about why the company has a high probability of providing them with long-term career growth. It’s not worth the risk of making an offer whenever the person’s answer to the “Why do you want this job?” question is vague, illogical, or lacks insight and details.

Related: Candidates Must Answer Yes to These 10 Questions Before You Ever Make an Offer

2) Set the career-making decision criteria upfront and throughout the process. During my first call with a candidate, I suggest they should not take any job unless it offers a minimum 30% non-monetary increase in their work satisfaction and potential career growth. This can look like some combination of a job stretch, more satisfying work, a better fit with the team, manager and company culture, and a higher probability of faster career growth. Throughout the interview process, I ask candidates how this role compares to others they are considering based on these same factors. I then use subsequent interviews to ensure the candidate is always thinking of their long-term career goals and growth.

Never let your candidates make long term career decisions using short term criteria. This rule has served me well over my career, but I learned about it in a somewhat haphazard way more than 30 years ago. A candidate for a plant manager job told me he was taking another offer with a better title, more pay, and a shorter commute. My gut response was: “You’re making a strategic decision using tactical information.” He paused and asked me what that meant. I said his criteria for comparing offers was all based on what he would be getting on the start date of the new job, not what he would be doing in the first year and beyond. Thinking long term, the job I was trying to fill was far superior.

The next day the candidate called to tell me he’d changed his mind and was accepting my client’s offer. A year later, he called again and thanked me profusely. The reason? He was just promoted into an even better opportunity as an executive with a company that was building a global manufacturing capability for high-volume consumer electronics. (His name was not Tim Cook, but it was someone just like him.)

I have formalized and followed this rule on 500+ search assignments and have built the concept into every talk and training session I conduct. It’s a simple one for recruiters to follow and the rewards are far worth the effort required to implement and institutionalize it.

*Photo by Javier García on Unsplash