Aside for showing up in flashy news headlines, self-driving vehicles haven’t had much impact on our lives...yet. But give it a few years (or maybe decades), and you will likely see that cabs, trucking routes, and even your own vehicles will become largely automated.

Using automated machines designed to follow pre-programmed rules and fulfill repetitive tasks has become one of the most efficient ways for companies to scale work and grow their profits. For many workers, however, there’s a real concern that automation may replace them, as it’s already displaced many manufacturing jobs, travel agents and even cashiers.

In fact, a recent study by the Organization for Economic Cooperation and Development (OECD) reveals that automation will likely impact more industries than previously thought (and change how you recruit). This graph put together by The Economist shows how different types of jobs will be impacted: 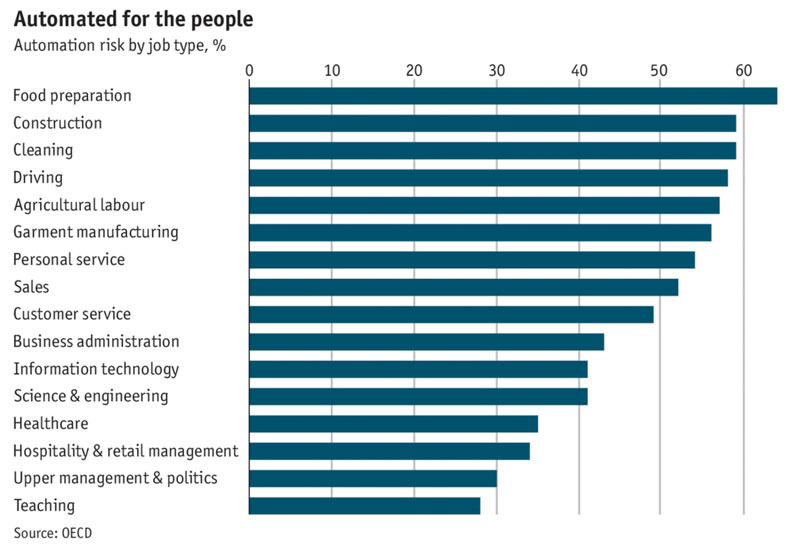 The jobs with the highest chance of being automated include manufacturing and agriculture, as many roles in these industries are already being automated. The OECD’s list shows jobs in service industries that could be affected, too, with food preparation topping the list.

The non-manufacturing jobs that automation may affect most include postal and courier services, land transport, and a number of jobs in the food service industry. Generally speaking, robots perform best at physical, predictable tasks—and can often do them more quickly, safely, and efficiently than their human counterparts.

Cleaning jobs also have a high automation risk (at nearly 60%), and we’ve already seen an influx of driverless cars that are starting to affect those in the transportation, rideshare, and even long-distance trucking industries.

However, while robots can perform manual labor thanks to advances in automation, they’re not even close to replicating human skills. The OECD calls these “bottlenecks to automation,” which include:

These bottlenecks explain why certain jobs have a much lower risk of automation, including roles in hospitality, healthcare, management, and teaching. These professions require a great deal of empathy, social perceptiveness, and cognitive intelligence—the exact skills that robots simply can’t master anytime soon.

What this means for you: Most recruiters believe automation and AI will help them do their jobs — not take them away

Below are the areas where AI and automation are most and least likely to impact recruiters: 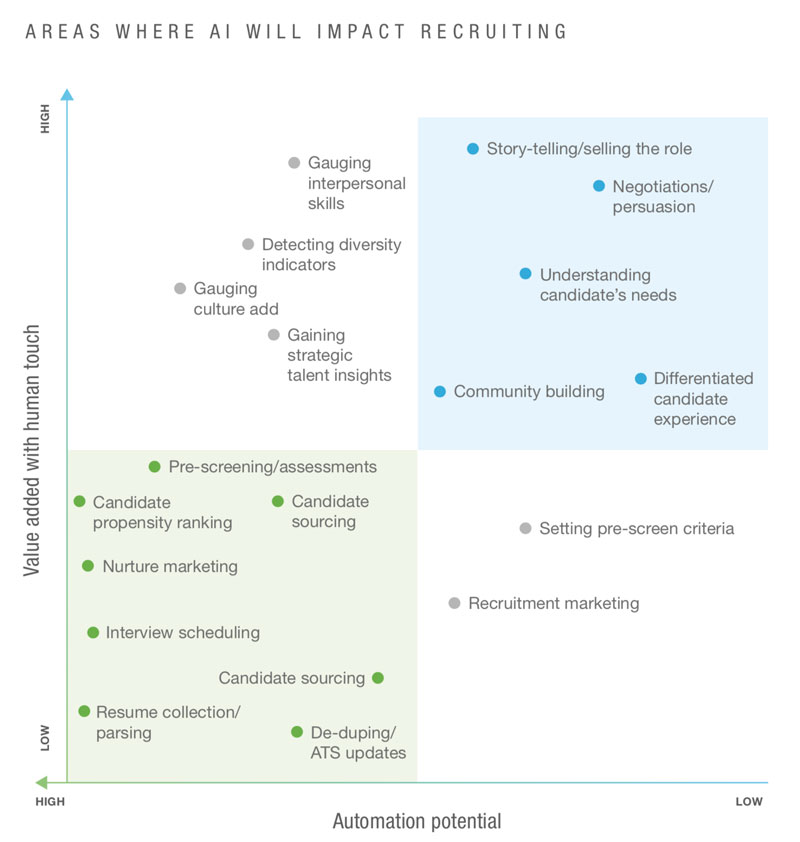 Resume collection, candidate sourcing, interview scheduling, coding skills assessment, candidate ranking, and other front-end recruiting activities are the likely to be automated first, given that computational abilities are out-pacing efficiencies of human decision making in the recruiting process. In fact, some argue that automating many of these activities would streamline the front-end process, remove mundane and repeatable tasks from the system and ultimately improve candidate experience.

As you move towards the recruiting activities listed in the top right quadrant, the need and value of human touch becomes more obvious. Empathetic interactions, like the ability to understand nuanced needs of candidates, negotiate with clients (and internal stakeholders) and to make the hire, demand the human touch. These are the ones that will be hard to automate using algorithms in the foreseeable future.