The single most important thing that separates great recruiting organizations from average ones isn’t the recruiters. It’s not your employer branding, or your tools, or even your sourcing strategies.

It’s your hiring managers—and how well recruiters can engage and involve them. That’s what John Vlastelica, founder of Recruiting Toolbox, said in one of the highest-rated sessions of last year’s Talent Connect 2016.

Traditionally, recruiters treat hiring managers like their internal customers, taking orders and delivering candidates. But John says to make a real difference, recruiters need to see themselves as partners and talent advisors, working with hiring managers—and putting them to work.

Let’s explore the why, what, and how of engaging hiring managers. We’ll briefly talk about why you need to engage them, then what that actually looks like (with a few examples from Amazon, Uber, and Yahoo!).

Most importantly, we’ll focus on how you can actually involve hiring managers with John’s super practical tips—including one magic, slightly manipulative question you can ask hiring managers that’ll make all the difference. (You can scroll to the bottom to go straight to those tips, but it’ll make more sense when you read through.)

Why recruiters need to break the traditional model, stop acting like order-takers, and start engaging the business

Recruiters often treat hiring managers like customers. That was John’s mental model when he was a young recruiter in the early 90s. By that line of thinking, it feels awkward or wrong to give hiring managers work—when you do, they’ll might say, “isn’t that your job?”

But your real internal customer isn’t the hiring manager, says John—it’s the business as a whole. The company is your customer.

Recruiters aren’t subservient to hiring managers—they’re co-equals who should be working together to make the best hire for the business. When you engage managers, you’re not passing your work off onto them, you’re just doing your job as a leader, partner, and talent advisor.

To many recruiters, getting hiring managers that involved might sound great, but seem pretty unrealistic. John is quick to point to a few examples of his own clients, showing that it’s not an impossible pipe dream.

At Dropbox, the recruiting team identifies passive candidates and calls on hiring managers to hold informal coffee chats with the potential candidates. Managers learn about the candidates’ interests, without the pressure and paperwork of a formal interview. These coffee chats have even been built into explicit goals for hiring managers and engineers to reach.

When Yahoo! was in hyper-growth mode a few years ago, recruiters pulled managers in for intense sourcing sprints. Not only did it get great results, as candidates were more responsive to InMails sent by hiring managers, but it also gave those managers some hands-on insight into the recruiting program. That organically opened the door for more partnership and input on targeting, describing and selling jobs, and hiring criteria.

At Amazon, John got the CIO super involved in generating employee referrals. He held pizza parties/meetings for new hires where the CIO met everyone, learned their history, sketched out where they fell within the org chart, and then spoke to where the company still had talent gaps before finally soliciting specific types of referrals. “He was actually teaching them a little bit about how they fit in, and also highlighting where we had big needs, and then we went in for the kill and asked for referrals,” explains John. “But it was positioned really as a business meeting, not as a recruiting and HR meeting.”

It’s not all about sourcing, either. At Uber, the head of product worked with recruiters to pre-designate which hiring managers would participate in interviews for each major job type, instead of scrambling to find an interviewer ad-hoc everytime.

“Good for them,” you’re probably thinking, “I wish my hiring managers would do things like that, but they never would.”

Not so fast. That’s exactly why John prefers to focus on the how of engaging hiring managers. Read on for useful tips you can act on right away.

How to actually engage hiring managers

1. Give hiring managers data on their own hiring performance—even if it’s ugly

John shared an anecdote about a risk he took as a young recruiting manager. He calculated the close rates for each director, brought the stats into an executive staff meeting, and shared them all with everyone.

Things got awkward. One director was hiring at a 95% close rate, while the one sitting next to her was closing at just a 65% rate. The second director got defensive and understandably upset. Luckily, before things descended into chaos, the executive helpfully steered it into a constructive discussion about what the 95%-er was doing right and how the 65%-er could improve.

It was a risk to share those stats so suddenly and publicly. Today, John would likely share them with each director individually first—but the lesson is that data can be a super effective animating force for hiring managers.

The underperforming director was pretty angry at John, but he also started getting a lot more involved with the recruiting team to turn things around. “I’d rather have a pissed-off, engaged hiring manager who wants to fight me, than one who is just ignoring me,” says John, “even if it’s uncomfortable and confrontational.”

2. Tap into hiring managers’ pain to motivate them and get them more engaged

“If there’s no pain, there’s really no motivation to change,” says John. Nothing’s going to change if the hiring manager is totally happy with everything—but they’re usually not.

“What are the consequences to you, your team, and your deliverables if we don’t get this job filled in the next two months?”

If it turns out that it isn’t that urgent, great. Then you as a recruiter know how to prioritize.

If it’s urgent because the manager wants to fill it before a vacation so they can relax, then you can remember that the business is your real customer, weigh the manager’s comfort against real business objectives, and prioritize accordingly.

But if it is truly urgent and dire, that realization will help light a fire under the hiring manager. They’ll look to you for help as a partner. “If you can show up as a talent advisor, as an expert, and you are really there to help them solve the pain, they will engage,” says John.

Too often, hiring managers aren’t at all accountable for how well they partner with recruiting. Hiring stats aren’t usually a part of hiring managers’ performance reviews—but that’s John’s fantasy. You might not be able to make that change overnight, but you can hold hiring managers more accountable.

For the stellar hiring managers, John recommends emailing their boss to say thank you. When John did exactly that, his email made it into the manager’s performance review—hiring goals were even integrated into his performance review for the year (John’s fantasy!). The manager wasn’t necessarily thrilled about the new responsibility, but John sure was.

4. Start building hiring skills into the hiring criteria for your company

Recruiters love to complain about bad hiring managers, which always strikes John as weird. “Geez, if only we had some influence over, I don’t know, hiring better hiring managers,” he says jokingly.

Recruiters have the power to make hiring experience and recruiting capability part of the criteria that’s used to evaluate candidates. Not only will you end up hiring better hiring managers—it’ll also impact existing managers, reinforcing the idea that recruiting is a core part of your culture.

5. To get real engagement from hiring managers, frame recruiting around their own motivations—and ask this one slightly manipulative question 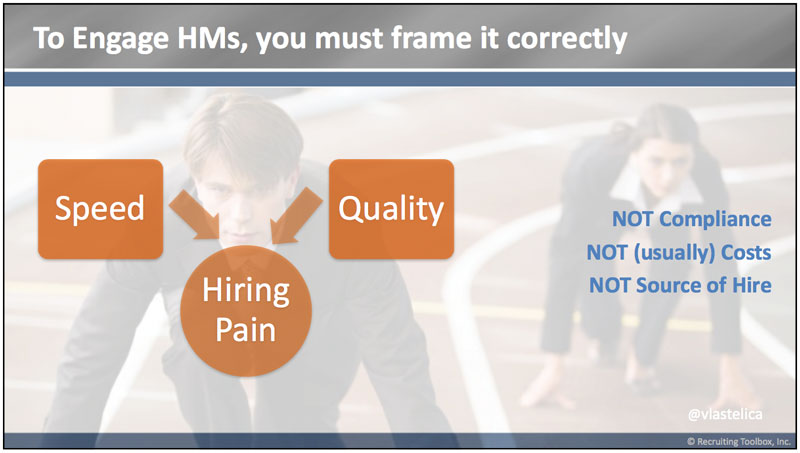 “Framing is a million-dollar skill,” says John, and it’s something that the best leaders excel at: framing a problem in a way that really speaks to the audience. To influence people, you’ve got to understand and speak to their motivations—not your own. “If I’m trying to influence a hiring manager and I’m talking about compliance or source of hire data, that’s not speaking their language,” he says.

After talking to thousands of hiring managers over his career, John says they consistently say they care about two things: speed and quality. “If I’m not framing it so that the outcome sounds like it has a positive impact on speed and quality, they’re probably not going to do it.”

“A very, very powerful way to go into a conversation with a manager is to speak to speed,” advises John. To that end, he recommends using this one powerful question:

“Would you like to hear what managers who fill these types of roles 10 days faster do differently? 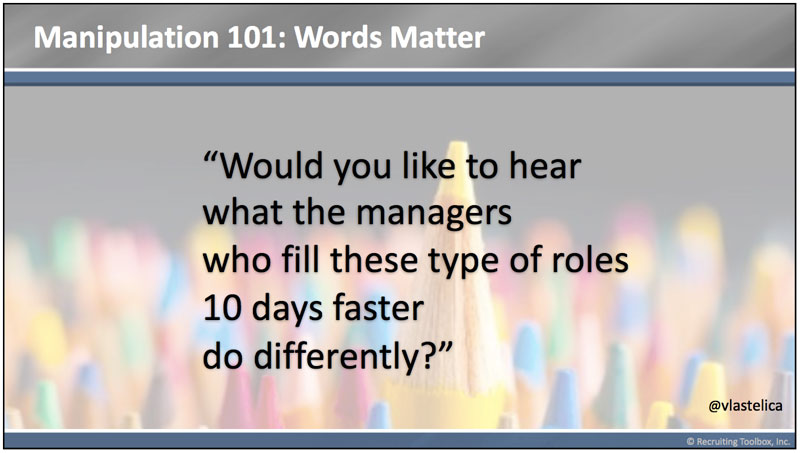 It’s critical that you frame this as a question, so that hiring managers opt-in themselves. The question is tied to speed—something they truly care about—and the way it’s framed piques their interest and highlights your expertise.

“That language builds an interest in me as the subject matter expert,” John says. “I’m highlighting that I can tell you—I know the secret sauce. ‘I have it, it’s right here, would you like some?’”

No matter what tactics you use to do it, engaging hiring managers is the single best strategy for recruiters in John’s eyes. “If I had an extra $10,000 or 10 hours to spend with a client I work for, I’d put that money and time into engaging hiring managers better and creating a culture of ownership,” John says towards the end of his Talent Connect session. “The most effective senior recruiters are phenomenally good at engaging the business.”

This post is based on “Leveraging Hiring Managers as your Secret Recruiting Weapon,” presented at LinkedIn Talent Connect 2016. Download John Vlastelica’s slides from Recruiting Toolbox and learn more about his Talent Advisor training program for corporate recruiting teams. And, if you'll be at Talent Connect in Nashville this year, you can attend John's session: Speed & quality: How to give hiring managers what they really want.