These 6 Companies Made Work-Life Balance More Than a Buzzword

A healthy work-life balance is one of the biggest predictors of employee happiness. In fact, more than half (53%) say it’s a “very important” factor for them in deciding whether to take a new job — and many are even willing to relocate to get it.

It’s easy to see why work-life balance is so important to people — and why companies are making efforts to address this issue. Employees working in cultures that promote an exhausting and unhealthy work ethic are more likely to experience stress, sickness, and burnout — hurting retention, performance, and morale.

Those who achieve a strong work-life balance, on the other hand, tend to be happier and more productive — working 21% harder, and staying with their companies longer.

But making work-life balance a core component of your culture — and showing employees that you truly value it — is easier said than done. Here are six innovative yet intuitive ways that companies around the world have helped encourage a better work-life balance for their employees—and won their loyalty as a result. 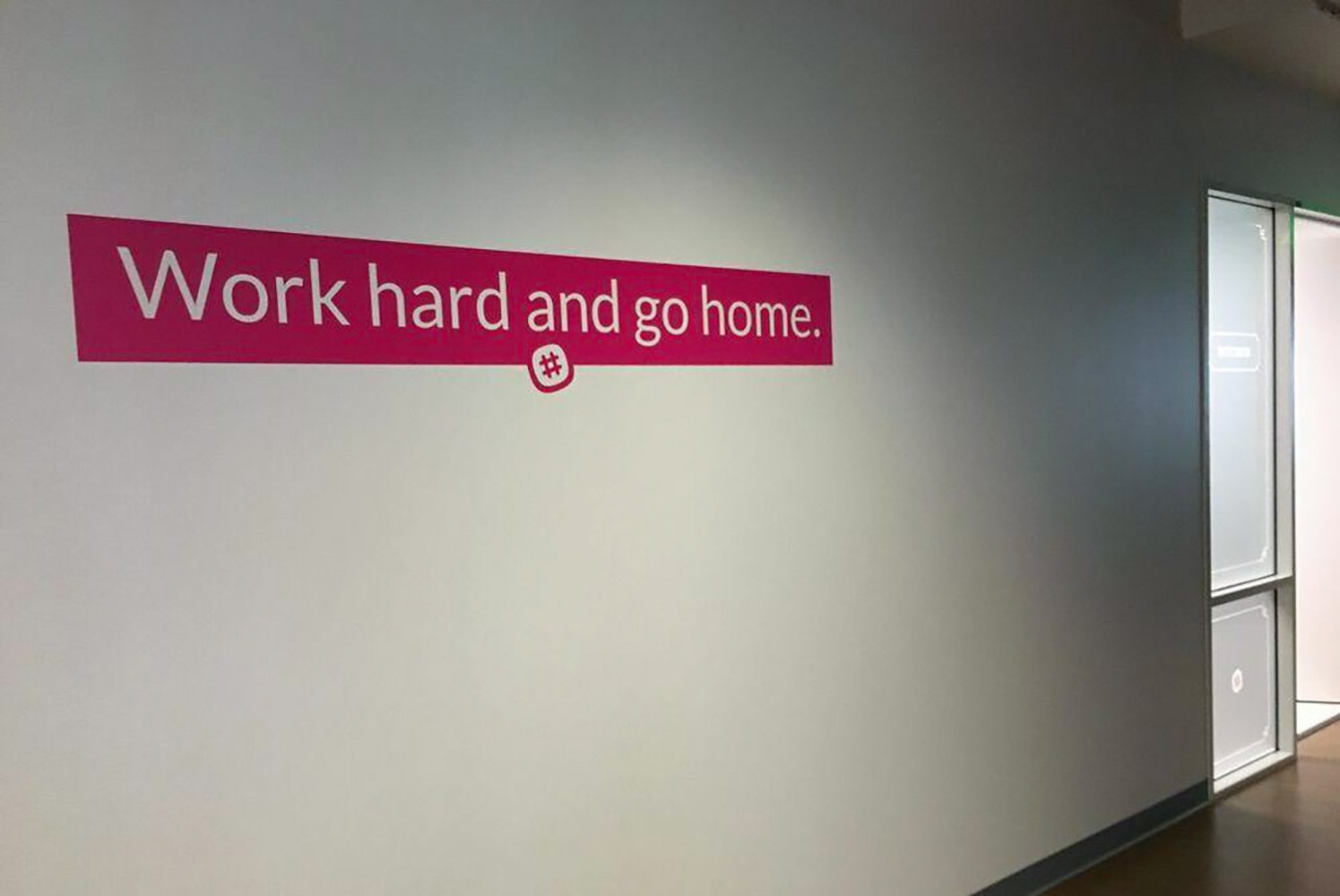 “We are actually genuinely focused on a work-life balance,” says Ali Rayl, VP of Customer Experience at Slack. “It’s something a lot of companies pay lip service to, but we like to tell people to work hard and go home. We don’t kit out our offices with ping pong tables or arcade games or anything. We really want people to come in, focus on their work […] and then go home.”

In a recent blog post, Slack explains that it aims to avoid the “overwhelming zaniness” that its Silicon Valley neighbors embrace. That way, employees can be their most productive and leave on time—without any temptation to stay late for yoga, cocktails, or a catered meal.

The “work hard and go home” philosophy is so integral to Slack’s values that it’s written on the company’s wall. It’s even built into the product itself — Slack has a do-not-disturb mode to help users “make room for the other stuff.”

The philosophy seems to work. By 6:30pm, Slack’s headquarters are mostly empty.

This isn’t to say that office perks are necessarily a bad thing. But it’s important to signal to employees that leaving on time is a good thing. Make it part of the culture so that no one sticks out or looks like they’re working less, and it’ll soon become second nature.

2. Ryan no longer tracks how long employees spend at the office—and lets them work from home

Ryan, LLC, a tax services firm headquartered in Texas, had an entrenched culture of long hours and working on weekends. Everyone was expected to work a 55-hour week and log every moment of their time, billable or not. The annual turnover rate was 22%—below the industry average of 27%, but still far from ideal.

The other shoe finally dropped in 2008 when a prominent manager submitted her resignation. CEO Brint Ryan realized that something had to change—starting with showing employees that Ryan values performance over time.

Rather than evaluating people based on “time on task,” the company developed an agreed-upon set of metrics to measure and track performance—discovering that many employees working 70-hour weeks were actually less productive than those working fewer hours. Time spent in the office is no longer tracked, as long as employees do their job well. They can also split their time as they choose between on-site and remote work.

The results have been overwhelming positive. Voluntary turnover dropped to single digits—6% by 2010 — while client satisfaction and financial performance increased. Recruiting also got easier, with as many as 95% of new hires saying the company’s flexible work policy was a factor in their decision to take the job. The CEO says the new policies enable staff “to achieve not just success at work, but success in life.”

This kind of major culture overhaul can’t happen overnight; Ryan invested in training for its managers and teams to smooth the transition. But a flexible work policy that shows employees it’s okay to get away from their desks can make a huge difference in their lives — and even improve their work.

3. Getaway makes it mandatory for employees to take four weeks of vacation per year

Cabin rental startup Getaway appreciates the value of taking a well-earned break — it’s the company’s reason for existing. To help employees recharge, it’s made vacation mandatory. Every employee gets 20 days off a year — and if they don’t take them, the company will remind them before the year is up.

Founder and CEO Jon Staff created the company — and the strict vacation policy — after experiencing the dangers of burnout firsthand. Rather than offer unlimited vacation, which he feels can create “real psychodrama” for employees since they may stress over how many days they should actually take, he wants to make it easy for them to unplug from work without feeling guilty about it.

This is a challenge many companies face. In the U.S., 52% of employees don’t take as many paid vacation days as they’re entitled to — accumulating 705 million unused days in 2017 alone.

But at Getaway, every single vacation day is tracked and accounted for. And if an employee clearly works during their day off — like sending emails when they should be chillaxing — Jon tries to help them “make those [hours] up somewhere else.”

Jon also tries to lead by example, sending pictures from his own vacations — and no other messages, if he can help it. This can be an important part of the process: by showing leaders actively taking steps to improve their work-life balance, it’s easier for employees to feel comfortable and supported doing the same.

Companies around the world are starting to warm up to the idea of a four-day work week. But many employers still worry about the effects this might have on productivity.

Perpetual Guardian, a Kiwi estate planning firm, wanted to find out if this fear was justified. It recently experimented with a 32-hour work week — even bringing in two researchers to study the effects.

Employees were still paid for the full 40 hours they usually worked. Many used their day off to cook, exercise, or spend time with their family or outside. One mother noted that she used the time to run errands, giving her more time with her kids on the weekend.

When they came back to work, they felt more energized — and reported a 24% improvement in their work-life balance.

What’s more, the company found that employees did the same amount of work in less time, because they found creative shortcuts to boost their productivity — like cutting two-hour meetings down to thirty minutes.

5. Northern Gas and Power gives employees all of December off if they hit their financial targets

British company Northern Gas and Power (NGP) goes one step further in its quest to give employees time off to recharge. The energy management firm prides itself for delivering an “unparalleled work-life balance” — giving employees the entire month of December off if they meet their individual financial targets.

Acknowledging that the work can be high-pressure and difficult, NGP says it wants to focus on the well-being of its staff.

“At Christmas especially we want them to finish early and spend time with their family,” one executive explains. “The [team] work hard and we believe that the success they create for us should be shared.”

NGP says its commitment to a healthy work-life balance plays an important role in recruiting and retention. The company is frequently ranked as one of the best places to work in the region.

You might not be able to offer an entire month off. But employees at NGP also praise the company for respecting the nine-to-five work week and leaving weekend for relaxing. When it comes to improving work-life balance on a daily basis, the little steps matter just as much as the big gestures.

One small way to help employees achieve a healthier work-life balance is discouraging the sending of emails after the work day is through. In France, this is mandatory—as of 2017, the “disconnect law” can land companies a fine if they make employees work outside of normal hours. New York City proposed a similar bill earlier this year.

Healthcare consulting firm Vynamic discovered just how effective this can be when they implemented their “zzzMail” policy. True to the company’s motto of “Life is Short. Work Healthy,” employees are encouraged not to email their coworkers between 10pm and 6am Monday through Friday, and all day on weekends and holidays.

Vynamic says this policy creates a kind of “structured disengagement” at home that makes employees more engaged and productive at work. If something really urgent comes up, they can still text or call. And if they really want to send an email, they’re advised to write a draft and hit send in the morning. That way, less people are disturbed when they’re at home and trying to unwind.

This policy has paid off. In its annual employer satisfaction surveys, Vynamic consistently scores in the 90% region — almost double the national average of 48%.

This kind of policy is easy to implement and totally free. It’s important that managers and leaders also respect the policy to ensure its success, since employees may feel more pressure to respond to their emails, whatever time they come through.

It’s great for employees to enjoy time spent at work, but no one wants to live in their workplace. By making hometime a valuable part of your culture, you can improve work-life balance for everyone — leading to happier, more productive employees who are less likely to leave.

* Images by Linkedin and Claire Kleese