How to Close More Candidates by Preventing Job Hopping Syndrome

Two weeks ago, I posted the below image and message on LinkedIn:

“A new disease is on the horizon—and it's career threatening. As the economy heats up, people switch jobs for the wrong reasons and catch ‘job hopping syndrome.’" 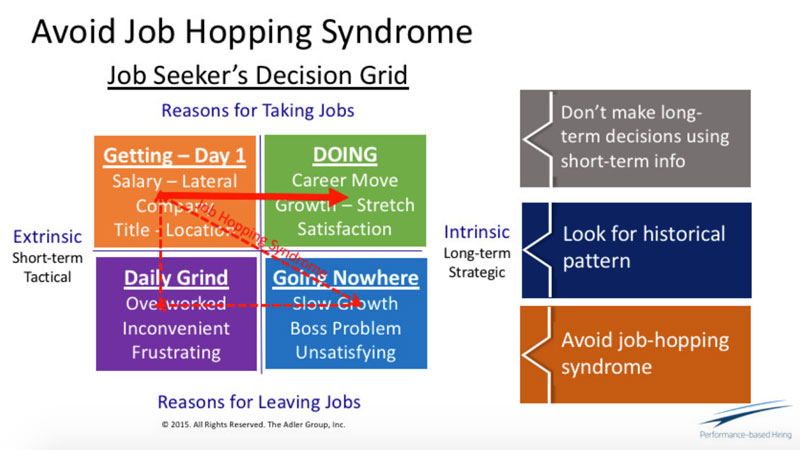 In a few days, more than 150,000 people read the message. It’s obviously an important topic. The detailed post that followed explained how job seekers can avoid the problem by being more diligent when comparing and accepting offers.

The primary reason candidates accept the wrong job for the wrong reasons is a lack of understanding of the real job requirements and the future opportunity. After two or three moves that don’t work out, it leads to a continuing series of lateral transfers that effectively puts a lid on the person’s upward growth. This is called “Job Hopping Syndrome.”

Job Hopping Syndrome (JHS): Switching jobs multiple times for the wrong short-term reasons, winding up with too many wasted years.

When necessary, good recruiters can intervene to minimize the problem by suggesting to candidates they should only accept offers that provide a minimum 30% non-monetary increase. The form below (download) can help guide this evaluation process along. The 30% is the combination of a bigger job, a mix of more satisfying work including working for a strong hiring manager, a job with more impact and one that offers a high probability of continued growth and learning.

When first approaching a top person, start with the premise that no one should make a long-term career decision using short-term information. Explain the 30% as the benchmark for making the decision and what information is required to make the assessment. Then make sure you get the person the evidence needed to prove that your job is the best career amongst competing alternatives.

How this tactic can be applied to three different candidate dilemmas

1. The candidate is overqualified, but still interested in the role.

On a recent embedded search project, I overheard one of the recruiters involved using baloney to convince a strong, somewhat desperate (but overqualified) candidate that the job was great for a variety of superficial reasons. I intervened and later told the candidate the job was not big enough for him and told him why. He gave us a great referral based on this honesty once we clarified why the job was a step down for him.

Lesson: Recruiters need to be straight with their candidates. Pushing someone into short-term career decision-making (the upper left corner of the decision grid) might help close more offers more quickly but it will backfire when the person learns the truth.

On another recent project, a top-notch candidate believed he was perfectly qualified for a much bigger role because he understood what needed to be done but was not interested in what he considered a lateral transfer.

He changed his mind when I described the Key Performance Objectives (KPOs) for the job and suggested knowing how to implement a global business process was not the same as actually implementing it. This required project management, systems, and collaboration skills the person had not yet acquired. By clarifying the expectations this way and describing the career gap, the candidate saw the same job as a great step in his career development.

Lesson: By comparing a person’s current job and trajectory to your opening and trajectory, you can present detailed reasons why the person should be open-minded and at least take the next step to learn more. (This is movement from the lower right to the upper right on the decision grid.)

This happened early in my search career when a candidate told me he was accepting another job and rejecting my client’s offer. His reasons related to a slightly higher compensation, a better title and a job closer to home. When I suggested he was making a strategic decision using tactical information, he paused. A day later, he accepted my offer since it was in a more advanced industry with a company going through major change rather than an old-line manufacturing company.

Nine months later, he called and thanked me. He said everything I mentioned was true and, in fact, he had just been promoted from a plant manager role to a VP of Operations over multiple manufacturing sites.

Lesson: It’s easy to shift someone’s thinking with evidence. In this case, I described the KPOs in the new job and some industry growth statistics to make the case. He didn’t have a clear understanding of the expectations for the other job so the comparison was straightforward. (This is a shift from the upper left to the upper right.)

By ensuring candidates are accepting offers for the right reasons, you can prevent them from hopping to a new job right away and ensure you are making high quality hires.