The Simple Solution to 3 of the Biggest Issues Recruiters Face

Over the past several weeks I have spent serious time with several private equity investors, a few CEOs of companies ranging from $100mm to $1b and a number of their C-level executives. In these meetings, our conversations quickly turned to how (other) recruiters they have worked with overpromise and underdeliver.

When it comes to their specific issues when working with recruiters, here are the collective biggies:

While all valid concerns, I said the root cause of these problems was surprisingly not the recruiters’ fault. Instead, it was the CEOs of companies who allowed their hiring managers to continue to define jobs as a set of skills, competencies and personality traits.

After this, they instantly agreed the traditional job description could be the cause of the problem.

The solution: Recruiters and hiring managers should work together to define the job as a series of performance objectives

To get around this problem I suggested the solution was to first define the job as a series of objectives a person would need to accomplish during the first year that defined exceptional performance. In most cases any job can be defined as a series of 4-5 performance objectives that describe the task, the action required and some measure of success or deliverable. For example, in the graphic used as part of the case study, the doing involves upgrading the antenna tracking system to meet some performance requirements in a certain period of time. This is clearly a much more attractive position than the list of skills that were originally sandwiched between generic baloney and hyperbole.

With this type of performance-based job description as the benchmark, the interview involves getting examples of the candidate’s major accomplishments most related to these performance objectives. If comparable, the person will have all of the skills, experiences and competencies required and most often it will be a different mix than what’s listed in the original job description. 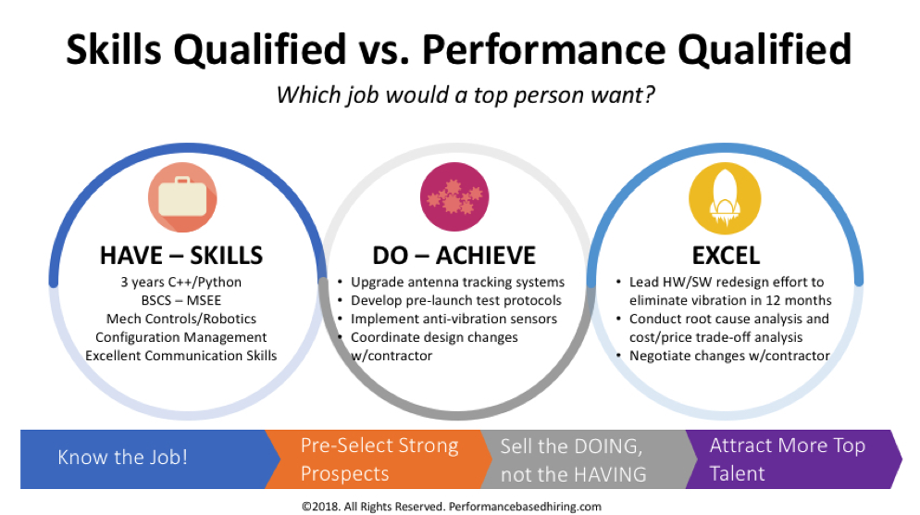 It wasn’t difficult to get most of the CEOs in the group to agree to the concept. One then suggested preparing these should be part of the requisition process with the recruiter and hiring manager working together. The conversation then took a life of its own with one of the private equity partners suggesting their CEOs should approve these reqs to ensure they tied to the aggressive business plans of the company.

Recognize that it’s what people DO with what they HAVE, not what they HAVE that makes them successful. Surprisingly the best people have accomplished a lot more with a lot less experience. That’s what makes them the best people. So if you want to become a highly respected and trusted partner with your hiring managers start by defining success rather than skills. Everything will then take care of itself.