In Louise Penny’s best-selling Inspector Gamache detective novels, one character has a particularly unusual backstory. Thérèse Brunel, the head of Quebec’s police force, joined the police academy after a career as the curator of Montreal’s Museum of Fine Arts—because she realized her skills and love of puzzles made her perfect for that path.

Thérèse might be fictional, but the FBI is currently looking for people just like her. Its recent “Unexpected Agent” recruitment campaign, which features ads across various social media platforms, YouTube, and the radio, aims to show candidates who’ve never considered a career in law enforcement that they already have the skills needed to excel.

As one ad shows, art historians and special agents share many pieces of the same skills puzzle. Candidates can also bring their unique passions to an FBI role—like a former art historian helping to identify clever forgeries. 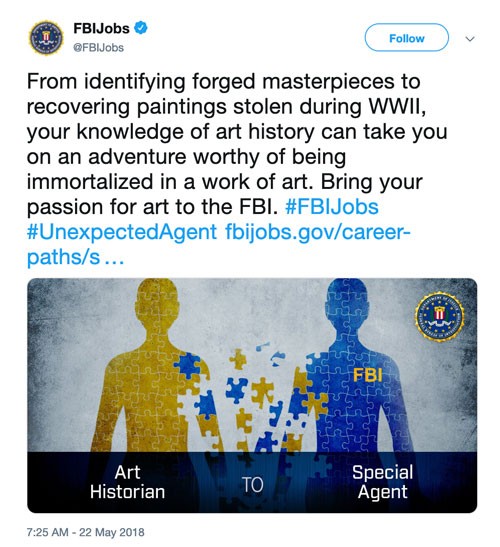 Here’s why this strategy might be the key to solving the FBI’s skills gaps and attracting diverse candidates—and what other employers can learn from it.

The FBI has a unique advantage when it comes to showcasing its careers. Unlike most companies, it’s been able to rely on Hollywood to do most of its recruitment marketing for it.

“Hollywood’s fascination with the FBI helps keep us and our mission in the public eye,” says Peter Sursi, Senior Executive of Recruitment and Hiring at the FBI. “I only have to expand and supplement awareness, unlike my colleagues at the National Geospatial Agency—no one knows what they do unless you’re in geography.”

FBI agents are a constant presence on TV and on the big screen, but this has proven to be a double-edged sword. Peter says these portrayals don’t tell the whole story, since they tend to be set exclusively “in some sexy city like New York, where everyone has abs and great eye make-up.” What’s more, they really only speak to people who already want to become agents.

“The people who dream of becoming an FBI agent early in life, I don’t have to go looking for them,” Peter says. “The core idea here is that we need to find people who aren’t thinking about becoming special agents or [pursuing] a career at the FBI.”

Rather than talking about the FBI right off the bat, the Unexpected Agent ads focus on the skills a candidate can bring first, before showing them why they’d make a great agent. After testing a mix of slogans, the FBI found that this approach attracts a very different group of candidates to the ones who typically apply. 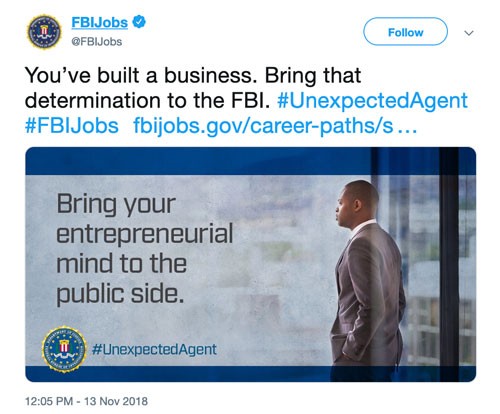 Interestingly, the British Secret Intelligence Service (SIS), more commonly known as MI6, is taking a similar approach. Since the martini-guzzling antics of its most famous fictional agent, James Bond, have created a public perception of MI6 careers that isn’t particularly accurate, the agency is shifting its focus to soft skills.

MI6’s first ever TV recruitment ad, which launched in 2018, explicitly states that “we don’t do what you think” and that “secretly, we are just like you.” It then highlights some of the soft skills the agency is looking for, like being able to “[pick] up on the silent cues that matter.”

The FBI has made a serious effort to diversify its workforce in recent years. This strategy is essential to national security and public safety.

“We know we are best able to protect the nation when we look like and represent the communities we serve,” FBI spokeswoman Lauren Hagee told ProPublica. “We know diversity increases cultural competence. We also know that once we understand and leverage the full diversity of our workforce, our operations and investigative and analytical insight are more effective.”

In 2016, the bureau aimed to see 40% of its special agent applications coming from people of color. It met this target in 2017 when 43% of applicants belonged to diverse groups. By March 2018, that number had risen to 47%.

But while the FBI has made progress, it still has a way to go, particularly when it comes to attracting female applicants. The Unexpected Agent campaign is intended to change that, showing that people from all walks of life can make great agents. 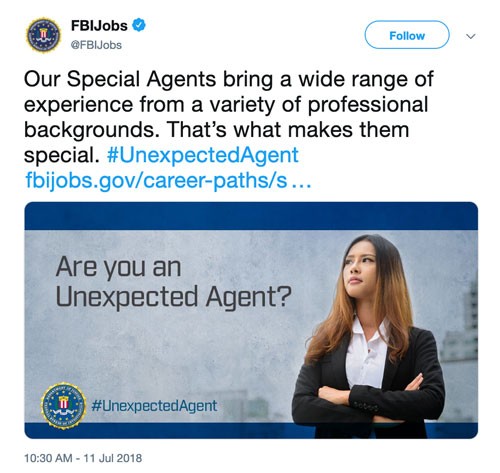 Peter knows this better than anyone. Before heading up the bureau’s hiring efforts, he was a middle school English and Japanese teacher. In the past, he has struggled to find candidates with essential skills the bureau needs, because these skills are rare among candidates who come from a more traditional military or law enforcement background.

“When I was in the foreign language program, and I was in charge of national linguist hiring, what I needed were 60-year-old Pakistani women who speak fluent Urdu to come work at the FBI,” he recalls. “And they are most likely not thinking of a career at the FBI.”

Sometimes, the best candidates are found where you’d least expect them. And for companies facing high competition for talent within your own industry, expanding the scope of the search can help you fill skills gaps much quicker.

Sure, candidates with non-traditional backgrounds might require a little more training to get up-to-speed. But as Peter points out, this training is much easier than finding pre-trained candidates with the essential soft skills a role requires.

“You definitely need to be in shape, you definitely have to learn the law, but we can teach you that part,” he says of FBI roles. “It’s much harder to teach amazing interpersonal skills, a thirst for knowledge, and a desire to help your community.”