It’s always nice to receive a thoughtful thank-you note from a candidate after you interview them. But if they don’t send one, it’s not a dealbreaker...right?

For Jessica Liebman, the executive managing editor of Insider Inc., it is. The thank-you note, in her opinion, can determine a candidate’s chances of getting the job. In a recent article for Business Insider, Jessica claims that using the thank-you email as a “barrier to entry” can be beneficial to companies. She even advises hiring managers to “never make an offer to someone who neglected to send one.”

Her article sparked controversy on Twitter, as many candidates and hiring professionals strongly disagreed with her approach. She later published a follow-up article clarifying that this is only a “rule of thumb” and not an official policy. She says that her company has in fact hired people who didn’t follow the rule. Nonetheless, she stands by her original claims.

While there are certainly arguments to be made on both sides, here are a few key factors to consider before adopting Jessica’s strategy yourself — and another strategy you can try.

The argument for the thank-you note: This gesture may show a candidate really wants the job and reveals important soft skills

According to Jessica, a thank-you email reflects two things about the candidate. First, she believes that it “signals that the person wants the job,” while failing to send one indicates they’re not really invested.

“The handful of times we’ve moved forward with a candidate despite not receiving a thank you, we’ve been ghosted, or the offer we make is ultimately rejected,” Jessica writes. “A few times, the offer is accepted, but the person pulls out before their start date or leaves after a few months.”

Secondly, Jessica says, a thank-you note can help test a candidate’s “effectiveness in the role,” giving recruiters more data on whether a candidate is a “good egg.” She argues that sending a note shows the candidate is organized, eager, and well-mannered, and if they have to hunt down an email address, then they’re resourceful too.

In her follow-up article, Jessica clarifies that the biggest factors she considers when making a hiring decision are the candidate’s talent and fit for the role. The thank-you email, she says, is just “one of many considerations.”

But while it may make more sense to view the thank-you note as one of many data points you gather about a candidate, rather than as a dealbreaker, there’s also the argument that you shouldn’t place too much weight on it — and that there are a few issues with this test that are important to keep in mind if you use it.

The argument against the thank-you note rule: It can put some candidates at a disadvantage and may not be in a company’s best interests

One of the biggest concerns flagged by Twitter users was the prospect of inviting bias into the process. Many point out that candidates who know to send a thank-you email after an interview tend to have had some job training, which can vary widely in quality and availability across different cultural backgrounds and social classes. Some schools don’t really teach it at all, while others will rigorously coach their students to prepare them for the job market.

As Erin McCann, a journalist for The New York Times, emphasizes in her response to the original article, using the thank-you email as a kind of unwritten extra test may lead to a homogenous workforce that all grew up with the same norms. 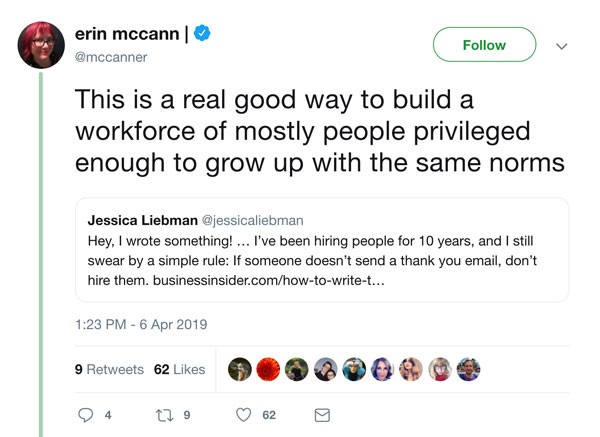 In her follow-up article, Jessica states that she hasn’t observed people from any particular background being more or less likely to send a thank-you email. That said, it’s debatable how much candidates broadcast their circumstances or upbringing.

And regardless of a candidate’s background, there are other reasons why they may not send one. As Rich Rojas, Erin’s Times colleague, writes in response to her tweet, “I’d be afraid of it coming across as obnoxious or me being ‘extra’.” Another user points out that depression, anxiety, and autism can also have an impact on a candidate’s instincts when it comes to this kind of communication.

The fact that it can sometimes be hard to track down the hiring manager’s email address may also put some candidates at a disadvantage. While hunting down an address online or guessing it based on the company’s domain naming conventions may be second nature to some, other candidates may be at a loss for how to find it. That doesn’t mean they’re not resourceful in other ways, just that they’re perhaps less tech-minded.

Putting aside concerns about efficacy and potential bias, some recruiters on Twitter offer a simple suggestion. In this day and age, maybe the thank you should come from the company, not the other way around.

As one senior recruiting manager writes, “requiring ‘thank you’s’ reflects an outdated view that you’re doing them a favor by considering them for a job...in fact, you owe candidates your appreciation for them considering your job.” 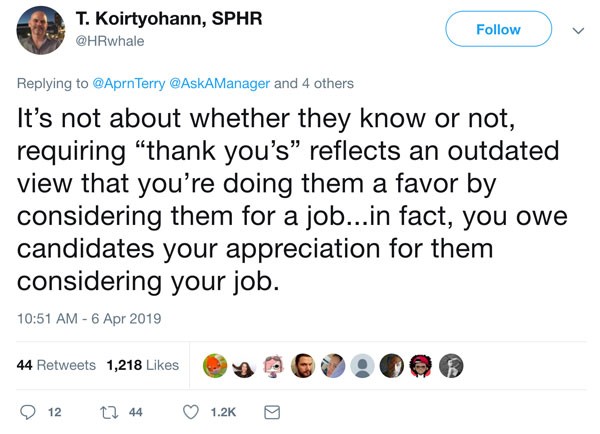 And as some candidates — including ones who’d previously interviewed for jobs at Insider, Inc. — note, companies aren’t always particularly responsive after interviews themselves, making the thank-you test feel like a double standard.

Removing unnecessary extra steps in the hiring process — especially any hoops that candidates don’t necessarily know they have to jump through — can contribute to a better candidate experience. Focus on making the hiring process clear and transparent and being as responsive as possible. Candidates will show their gratitude in the form of positive word of mouth, which will do a lot more good than an email.

The takeaway: Rather than using thank-you notes as a proxy for soft skills, test relevant soft skills directly

Since soft skills can be particularly difficult to test for and assess, interviewers may sometimes be tempted to attribute a candidate’s words or actions to a soft skill they’re searching for — even if those words or actions aren’t really representative of the skill. And if the majority of candidates know to send a thank-you note, as Jessica believes they do, it’s debatable whether sending one demonstrates a skill like organization in action or just an awareness that certain interviewers expect it.

While Jessica does point out that passing the thank-you test “doesn’t necessarily guarantee the person will be a good hire,” she argues that it gives interviewers a deeper insight into some of the candidate’s skills, like organization. But not everyone agrees. Alison Green, the author of How to Get a Job: Secrets of a Hiring Manager, says that sending thank-you email “has nothing to do with skills & ability to excel on the job.” 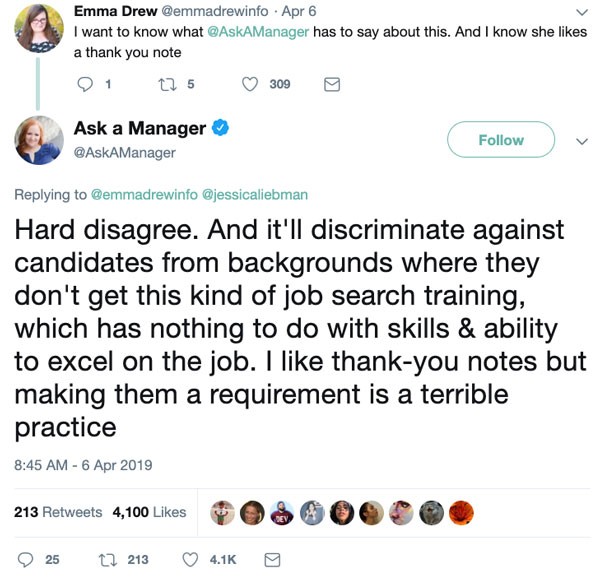 Rather than using something like a thank-you note as a proxy for a soft skill, there are a number of ways to test for these skills directly. Instead, consider using science-backed predictive assessments that are designed to specifically identify and measure these skills. You can also use situational interview questions that allow you to see a candidate’s soft skills in action.