3 Ways the Best Recruiters Stay Ahead of the Pack

In a competitive job market, finding the best and the brightest doesn’t come from randomized recruiting strategies without careful inspection of trends or what others in the industry are doing. If an $8 per hour role costs the company about $3,500 in direct and indirect recruiting costs, imagine how quickly those numbers add up when you’re filling roles at a high volume or hiring for roles that require specialized qualifications. Can your company afford to have that kind of money go down the drain?

Below, talent leaders share how they’ve streamlined their recruitment efforts to find and hire the best candidates. Do you do any of the below?

1. They stay in touch with qualified applicants who didn’t get the job

Sometimes you get lucky and have several good prospects applying for one available position. While it’s unfortunate that you can only hire one person, it’s also a shame if you lose touch with the qualified applicants who didn’t get the job.

Brian Murray, director of talent and culture at Likeable Media says he often connects with good prospects on LinkedIn and other platforms to “regularly reach out and engage at the right time.”

“I get relevant updates on candidates like job changes and work anniversaries, so I know when and why to reach out,” he says. That way, when other roles become available, the search isn’t too tough on Murray.

Here’s JT O'Donnell's advice on how to write great job descriptions to attract those qualified candidates in the first place: 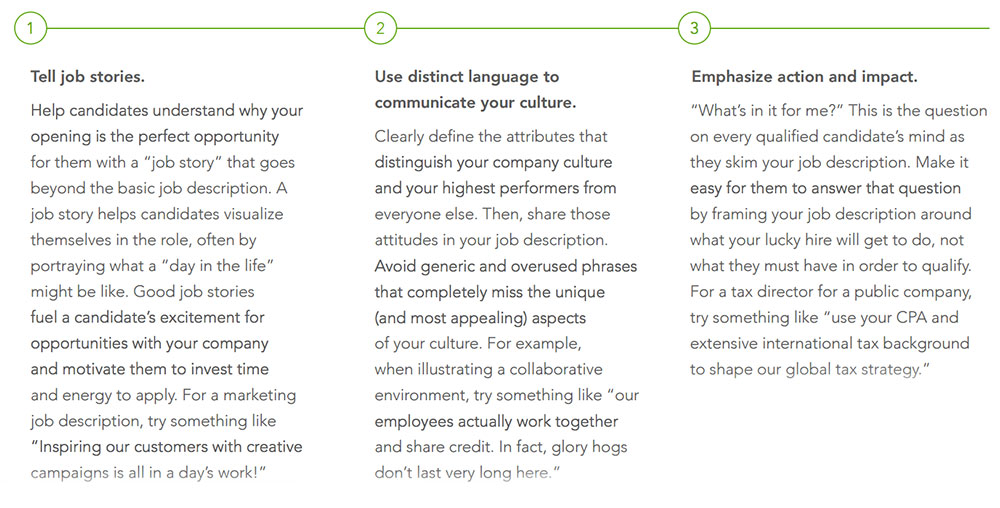 2. They analyze the data to see who’s engaging with your crafty job posts

Sure, you could post job ads and hope the Internet magically attracts qualified people, or you can take a closer look at the data, identify trends and better allocate future spending on posts.

The latter is exactly what Matt Kennedy, director of talent acquisition at Starbucks, does to reduce overall cost-per-application. For instance, if engagement rates for certain positions are higher on specific channels versus others, then by shifting resources to positions already organically performing well, you can further attract more qualified applicants.

“The data helped us prioritize our finite resources where we could drive the biggest impact,” says Kennedy.

Similarly, Jason Jeffreys, a director of program management and operations at LinkedIn, knows that effectively using data can save time and money. In late 2014, Jeffreys was tasked with hiring 100 customer success representatives in 60 days. Initially, he set up three rounds of interviews, but later allowed candidates who aced the first round to skip to the third. His reasoning was that the data showed 90% of candidates who were rated highest by recruiters after the first interview, eventually made it to the third round anyway. Without taking a close look at the data, Jeffreys wouldn’t have been able to streamline the process and send those candidates straight to the final round.

Misalignments with hiring managers can lead to wasted time, energy and money. And the stakes are even higher in hard-to-fill roles, which make up about 8% of the positions at pharmaceutical company Novo Nordisk.

To ensure upfront alignment occurs early on, Michael Hakeem, an associate director of talent attraction and technology, believes the secret is in inspiring and empowering hiring managers to become recruiters, as he’s found that hiring managers get better traction when posting jobs. For instance, the Denmark-based company launched a “lunch & learn” program to help hiring managers ramp up their profiles on social media and join relevant groups to share their expertise.

The result: 732 candidates are currently in the company’s pipelines and 11 hires have been made in the last 18 months.

“By teaching and encouraging hiring managers to take a more active role in hiring, they’re reaching and engaging candidates we never could have on our own,” says Hakeem.

It doesn’t matter what industry you’re in or what products and services you provide—talent will always be your most important asset. So the responsibility of finding those valuable assets is definitely not for the faint of heart, especially when you imagine how much it’s costing the company when piles of open roles that need to be filled yesterday, aren’t. Want more advice on staying ahead of the pack, especially during times of need? Check out the Guide to High-Volume Hiring.