When NBA free agency started a few weeks ago, Magic Johnson was asked about his approach to recruiting top talent, including LeBron James. He basically said it was a high touch relationship-based process customized to the needs of the player being recruited.

Magic went on to say the team’s current and future needs had to match the player’s skills, future goals, and ambitions in order to increase the likelihood the player would agree to join the Lakers rather than go elsewhere. He also said the money was less relevant (not irrelevant) on both sides if these needs were matched and met.

When I received my first industry management position 46 years ago, my boss said something eerily similar. The point was driven home just a few weeks after starting when I balked at going to the University of Michigan at the last minute to interview MBA students, claiming I had too much work to do. He said something every hiring manager should consider that sticks with me today, almost a half-century later:

"There is nothing more important than hiring the strongest talent. Nothing. Everything else can wait." – Chuck Jacob, 1972.

It’s still true today, and while many managers believe it, few actually live it.

Well, I hustled over from Troy to Ann Arbor in time for the afternoon interview schedules. That same evening, we had dinner with six of the best 18 students we interviewed that day—and soon hired four of them. Unsurprisingly, all of them subsequently went on to executive-level positions with major companies.

The main reason we hired them against more prestigious companies was that we promised not only faster growth, more learning, and bigger opportunities, but we also proved the promise.

Chuck’s recruiting pitch that day, which is one I still use as part of our training, started with the premise that time is a person’s most valuable asset. Those who get ahead the fastest are those who maximize their use of time. 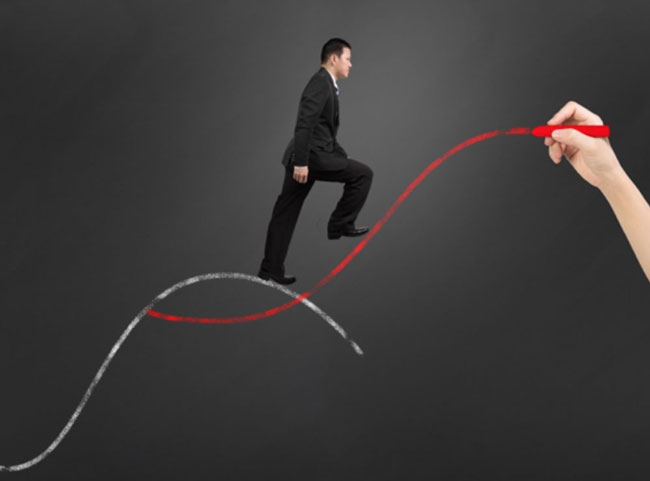 Chuck then drew something like the image shown and said, “Sure you can go with one of the big-named companies, and for the first year or two you’ll be on a steep learning curve. But it will take another year or two before you’ll experience another big stretch opportunity due to the competition and the company’s stability.” He added, “At our company, you’ll likely experience stretch jobs and promotions for at least three to four years since we’re going through rapid change and there are some huge management holes to fill in the upcoming years.”

He then pointed to himself and said he’d only been with the company three years and was already promoted two times into the number two financial executive position at a $2 billion group. Chuck was only 29 at the time. Pointing to me, he said, “Lou got his MBA last year and just got his first promotion.” (Note: A few years later, Chuck became the youngest CFO at a publicly traded company. He sadly passed away at too early an age about 10 years later or you would have likely seen his picture on the cover of BusinessWeek at some point.)

Chuck and Magic both agree on what real recruiting is all about: You need to customize your recruiting pitch to the needs of the person or player you want to hire. To differentiate yourself, you can’t use the one-size-fits-all approach the other bigger names and brands are using if you want to attract and hire the best. And the promise needs to be highly probable as long as the person delivers the expected results.

However, this commonsense recruiting approach seems to be lost on today’s talent leaders. For some odd reason, they believe the only thing needed to hire top talent is using a high-tech, high-volume process with AI to separate the best from weak, along with a positive candidate experience.

If true, the recruiting profession will be relegated to the back office.

Finding and hiring strong people who also have an economic need to play 200:1 odds for ill-defined, lateral transfers seems an odd way to achieve a company’s talent objectives. I’d rather adopt Magic’s and Chuck’s advice: Target the best people. Build a relationship. Clarify real job needs. Then match the hiring manager’s and company’s short- and long-term needs to the candidate’s abilities, interests, and aspirations.

There is nothing more important than hiring the strongest talent. Nothing. Everything else can wait.

*Image from the Lakers