A year ago, the hiring process for LinkedIn’s Product team was, well, suboptimal. Feedback from interviewers was sporadic. Candidates had anywhere from one to 12 interviews, with an average of eight onsite. And the average time to “approved for hire” was 83 days.

To fix this, Ryan Rolansky, the SVP of Product, brought in Amy Schultz as the new head of recruiting for his team. “Ryan told me that we did not have a consistent bar to assess talent,” Amy recalls. “He wasn’t sure if we were bringing in the best talent or if all of our product managers were equipped to be interviewing and assessing talent.”

So, Amy partnered with Caroline Gaffney, Ryan’s chief of staff, and LinkedIn’s People Analytics team to review the hiring process top to bottom.

Together, they overhauled everything from the number and nature of the interviews to the training and evaluation of interviewers. And the results have been nothing short of stunning. The average time to approved for hire has dropped from 83 days to 41, and 93% of the time interviewers are now completing their feedback (usually, within 24 hours).

“The new process,” Caroline says, “helps us more effectively and efficiently build our team. We have a better signal of a candidate’s strengths along the criteria that matter most to being a successful product manager at LinkedIn. We have the right data to hire the best people, in a shorter amount of time, with a better candidate experience.”

For anyone who feels their hiring process is too unruly or unpredictable, here are the tactics LinkedIn’s Product team used to transform its process:

1. Streamlined the number of core competencies a successful candidate needs

When Product initially began its hiring overhaul, they named the effort Project Formation.

“That was really just because I like Beyoncé,” Amy jokes. But central to the project was an effort to give the hiring process a more consistent shape.

“We didn’t have a universal understanding of what it means to be a successful product manager at LinkedIn,” Caroline says. “This led to extra cycles of people’s time to collect more data to compensate for the flawed process. In a worst-case scenario, it led to hires who weren’t set up for success.”

To simplify, the Product executive team cut the seven core competencies down to four and made sure everyone was aligned on what they mean. These new competencies are:

The sharpened focus on what Product needs in talent allowed them to make some significant structural changes to their process.

2. Standardized the number and focus of interviews

For the convenience of the candidates — and to accelerate the process — the four onsite interviews are now back-to-back, with short breaks between each. Amy says that in cutting back the number and length of interviews, Product has reduced the average number of hours interviewing each hire from 30 to 12. And the newfound hiring speed has not had a negative impact on diversity efforts: Since the new process rolled out, 47% of hires have been women. 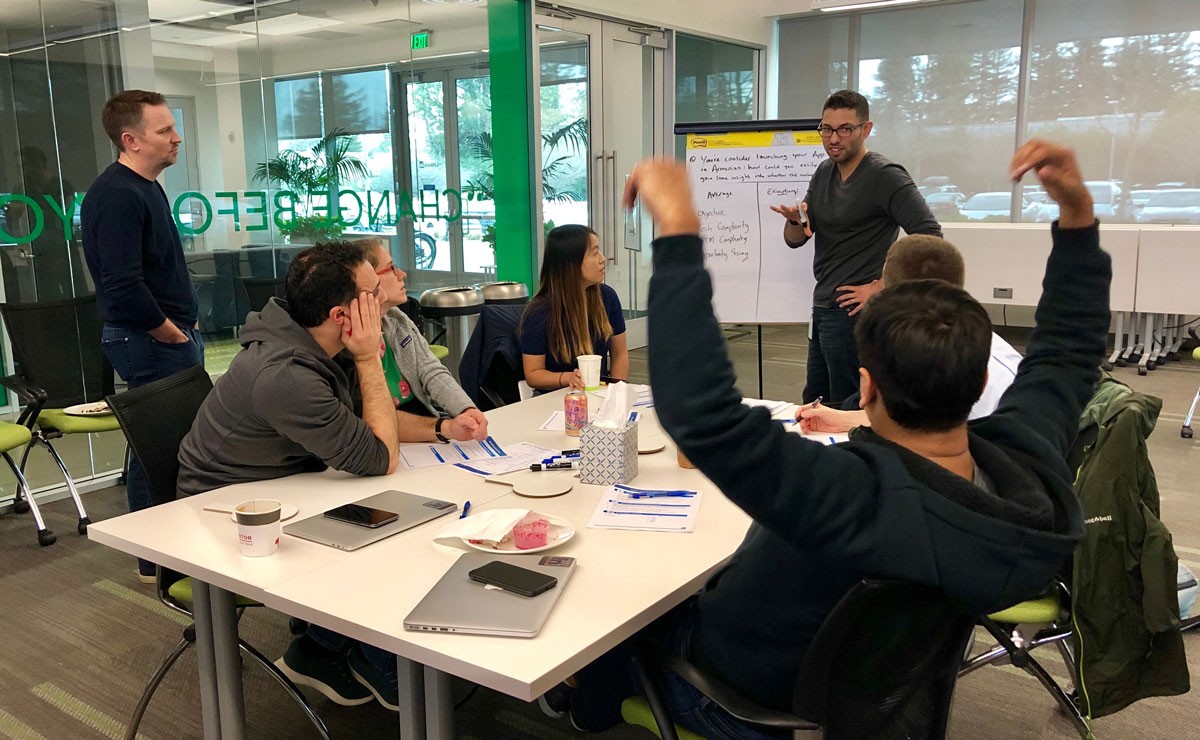 Amy and Caroline worked with LinkedIn’s Learning & Development team to develop a brand-new training session that was custom-built to support the new process. The class runs for two hours, trains 16 interviewers, and includes a thorough analysis of each of the four key competencies that they look for in candidates. Ryan, Caroline, and one other Product executive attend each session to introduce the competencies and answer any questions that arise.

The training sessions include reminders about what is being assessed for each of the key competencies. For example, for “takes initiative and gets stuff done,” the prospective interviewer is reminded to weigh whether the candidate can make progress in suboptimal or constrained circumstances.

The Product team has also assembled a dozen or so questions to explore each competency. For example, to assess “builds quality products,” a suggested question is, “What new feature would you add to LinkedIn?”

The training includes role-playing, in which one team member plays a candidate and another, the interviewer. “We give them three minutes to role-play a question-and-answer scenario,” Amy says. “Then we ask everyone else to score.” All the trainees are given a ping-pong paddle and write their scores — 1 (do not hire) to 5 (exceptional) — on it.

“We’re trying to show the variation that exists in assessment,” Amy says. “One person might score the interview a 2 but somebody else gives it a 5. So, we’ll say, ‘Tell me why that answer was a 2 for you?’ And that person will say, ‘Well, I felt it was missing x, y, and zed.’

“To the other person, we’ll say, ‘You gave a 5. You obviously felt that that was a really strong response. Why was that?’”

And now the interviewers have a chance to calibrate and share a sense of what looks good, bad, and ugly. 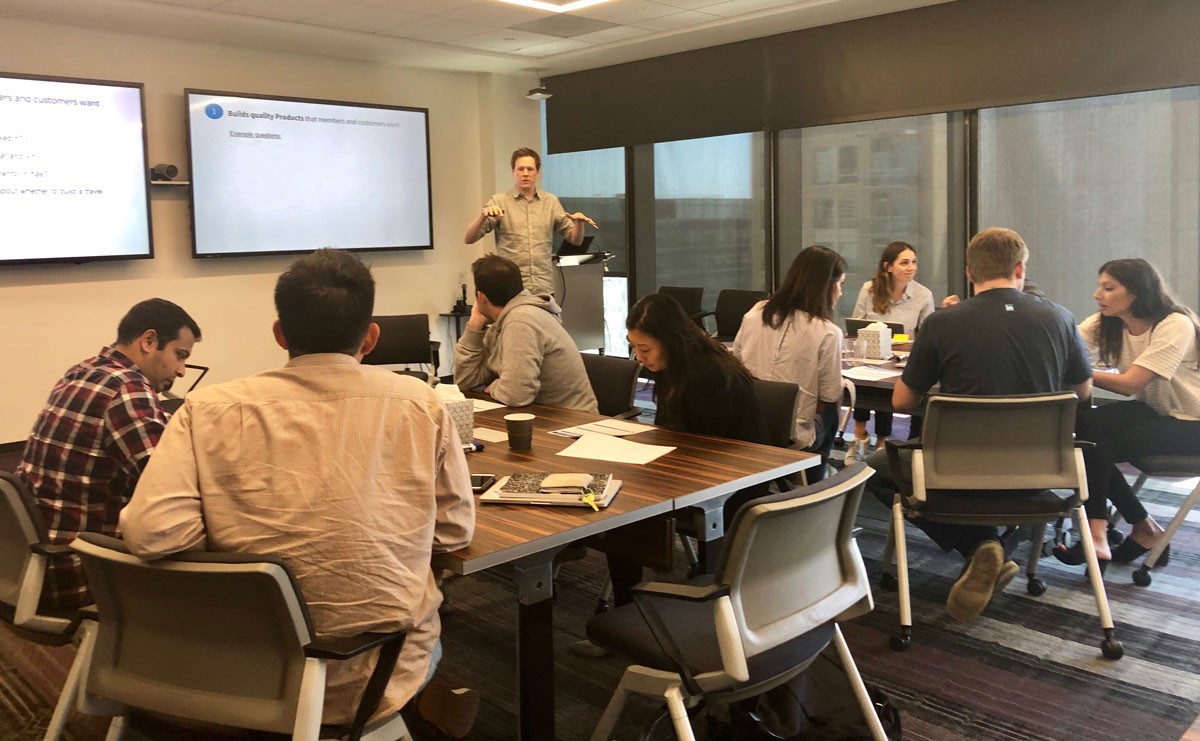 Before the overhaul, interviewers were asked to fill out seven areas on their assessment forms. The assessment form that Product uses now asks for just four things — all around one area of focus.

First, it asks every interviewer to provide a rating from 1 to 5.

Second, each interviewer is asked, “Would you hire this person for this position?” Previous feedback had often been squishy: “The candidate was OK. Not for my team, but maybe somewhere else at LinkedIn.” Or, “Not right now, but maybe at another time.”

Ryan’s response to all that waffling? “If you don’t believe they are a hire for your team,” he said, “then they’re not a hire for LinkedIn.”

Third, the form has space for the interviewer to list the questions they asked. Over time, this will allow the talent acquisition team to see if some questions are better than others at revealing superb candidates.

Fourth, interviewers are asked to provide an assessment that includes a recount of answers that demonstrated the candidate’s strengths and weaknesses.

In FY2018 and the first quarter of FY2019, feedback was completed for 74% of product manager interviews. After making the changes and introducing the new training, completion jumped to 93%, with the vast majority meeting the 24-hour timeframe.

5. Started evaluating their interviewers — and celebrating the outstanding ones

The quarterly scorecard tracks eight metrics, including the number of interviews done, the percentage of interviews for which feedback was completed, and the feedback rating distribution for all candidates and for hired candidates.

“If someone is consistently scoring people with 4s and 5s and these people never get hired,” Amy says, “why it that? Conversely, if they’re constantly giving 2s and 3s and noes and everybody else is giving 4s and yeses, why is that?”

The Product team has introduced a weekly calibration call on which interviewers hear how candidates did across all their interviews. As well, interview results are shared at weekly executive staff meetings and Ryan sends notes to interviewers whose assessments have been particularly insightful and helpful.

Given the current level of executive attention paid to interviews, more product managers have raised their hands to conduct them. The interview team has grown from 57 to 100 in the last year and that growth has been one of the key reasons the time to hire has been cut in half. 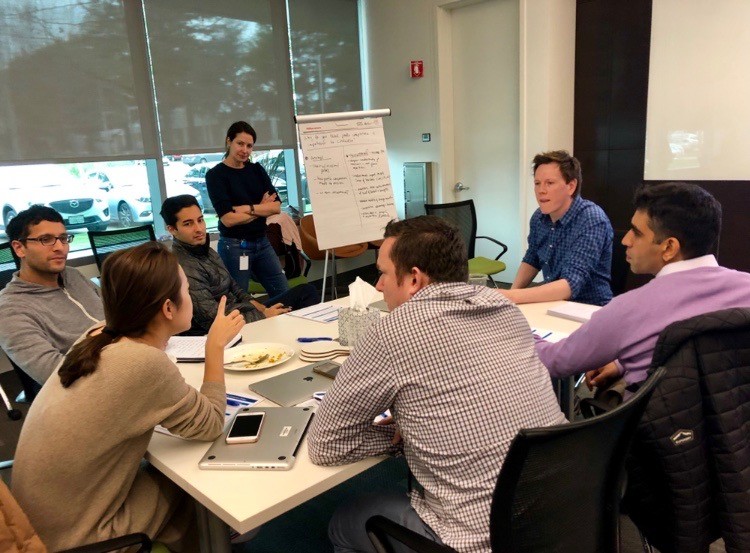 6. By adding shape and discipline to their hiring process, Product has boosted the candidate experience

The Product team was losing candidates who had taken jobs elsewhere by the time they received an offer from LinkedIn. And candidates who didn’t receive an offer were even less happy, aggrieved at receiving little or no feedback after investing enormous amounts of time prepping for their interviews.

Now, after interviews, a LinkedIn recruiter reviews the evaluations in the ATS and then speaks to the candidate. “We do let them know the focus areas they performed well in,” Amy says, “and where there was opportunity.” The recruiter doesn’t share scores.

The combination of a streamlined process and actionable feedback seems to be working: The combined Net Promoter Score from candidates who did and didn’t receive offers from Product was recently up 19 points quarter over quarter.

Amy says moving forward Product hopes to make some additional refinements to their hiring process. Among other things, they would like to start having formal recognition for the outstanding interviewers on their team. And they also want to analyze the questions interviewers ask against the results of first-year performance evaluations to see which questions are best at uncovering the top performers.

But clearly Product has already asked the most important question of all: How can we make our hiring process work better for everyone?