The Top Startups of 2018: 50 U.S. Companies That Are Becoming Talent Magnets

Who doesn’t love the romantic tale of an innovative startup company—the breathtaking vision, the pioneering courage, the all-or-nothing gamble?

Today, we’re excited to celebrate 50 such stories as we unveil our ranking of the 2018 LinkedIn Top Startups—the young U.S. companies that are generating excitement in the marketplace and, particularly, the workforce.

To build this list, we looked at billions of actions taken by LinkedIn members and examined four areas in particular—employee growth; interest in a company’s jobs; member engagement with the company and its workforce; and how successfully these startups have been drawing talent from the businesses on our 2018 Top Companies list. In addition, we only looked at startups that have at least 50 employees and that are privately held, headquartered in the U.S., and 7 years old or younger. 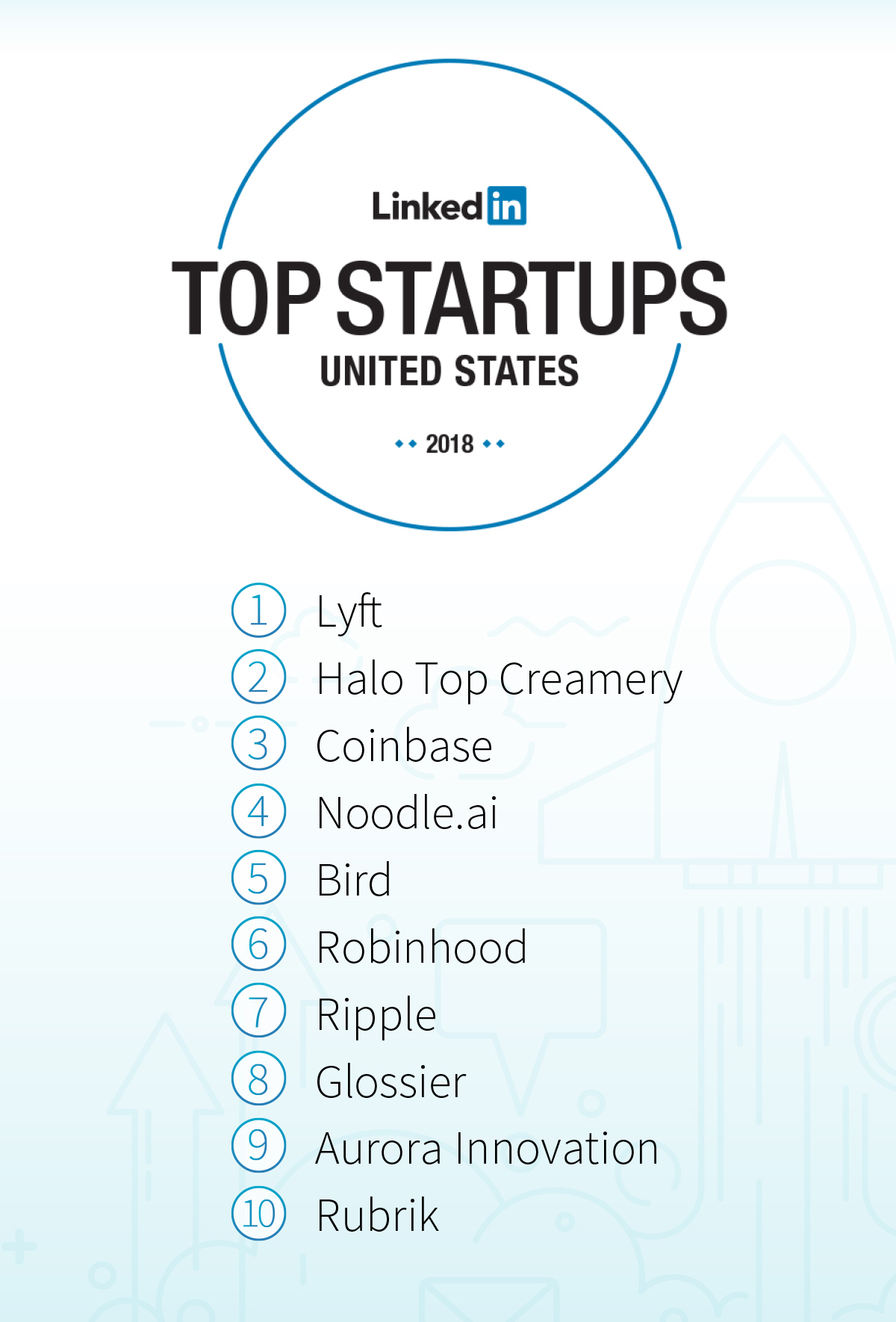 Hats off to these winners, who are already shaking up their industries. Halo Top Creamery #2, for example, scooped its rivals, including Ben & Jerry’s and Häagen-Dazs, by becoming the best-selling pint of ice cream in U.S. grocery stores. Investment app Robinhood #6 has topped 5 million accounts and surpassed industry warhorse E-Trade. And this year’s top startup, ride-sharing upstart Lyft, increased its market share from 20% to 35% in 2017, rattling the problem-plagued Uber.

As you might expect, more than half the companies on our list are tech firms. But a lot of other fields are also enjoying the innovation and revolutionary perspectives that startups can bring to an industry. Startups are disrupting food and beverage (Halo Top #2), fashion (Allbirds #29, Outdoor Voices #43), entertainment (UnitedMasters #33), insurance (Root #18), hospitality (The Wing #36), cosmetics (Glossier #8), transportation/trucking (Bird #5, Convoy #32), retail (Away #30, Enjoy #38), and financial services (Robinhood #6, Ellevest #14, Affirm #24, Gemini Trust #25).

Other threads we found running through the startups tapestry include:

What startups can do to recruit top talent

In its most recent annual State of the Startups report, First Round Review determined that hiring good people is the biggest concern among startup founders. Yet despite this anxiety, most leaders don’t spend that much of their time on hiring—three out of four respondents in the survey said they spend less than 20% of their time on it. Spread thin for time, founders are primarily focused on product, management, and fundraising.

To allay these concerns about talent acquisition, startups can lean on the best practices of talent leaders who are veterans of young, fast-growing companies:

2. Create an efficiency mindset: Keep an eye on how much time is spent on each hire and the efficiency of each part of your hiring funnel.

3. Give candidates a take-home assignment: Strong performance on a take-home challenge is likely to translate into on-the-job success.

4. Hold hiring managers accountable: A lot of companies hire by consensus, but when one person is on point, more care is likely to go into each hiring decision.

5. Track your best sources of hire: With limited resources, double-down on the channels that produce the best results.

You can also check out the 25 LinkedIn Top Startups in Canada, which debuted today. In the coming weeks, we’ll also be releasing our Top Startups for Germany, Australia, the United Kingdom, Brazil, India, and France.