The Amazon HQ2 selection has been nothing if not exciting to watch. Like a battle royal wrestling match, we waited with bated breath, as 238 cities were gradually disqualified to leave just one standing. Which made it all the more shocking when Amazon announced that two cities would share the title of HQ2: Crystal City, VA, in the Greater Washington D.C. area and Long Island City, Queens, in the Greater New York City area.

A major factor in this decision was available talent. Hiring 50,000 qualified employees is no small feat, and splitting the HQ2 title between two cities provides an even larger talent pool for sourcing.

Amazon emphasized in their request for proposal that a healthy supply of software engineers was paramount. And both Greater New York City and the Greater D.C. area can deliver them in droves. We know this because we analyzed the talent pools in our new self-serve analytics product, LinkedIn Talent Insights, and saw some striking similarities between the two labor markets. Here’s what else we found: 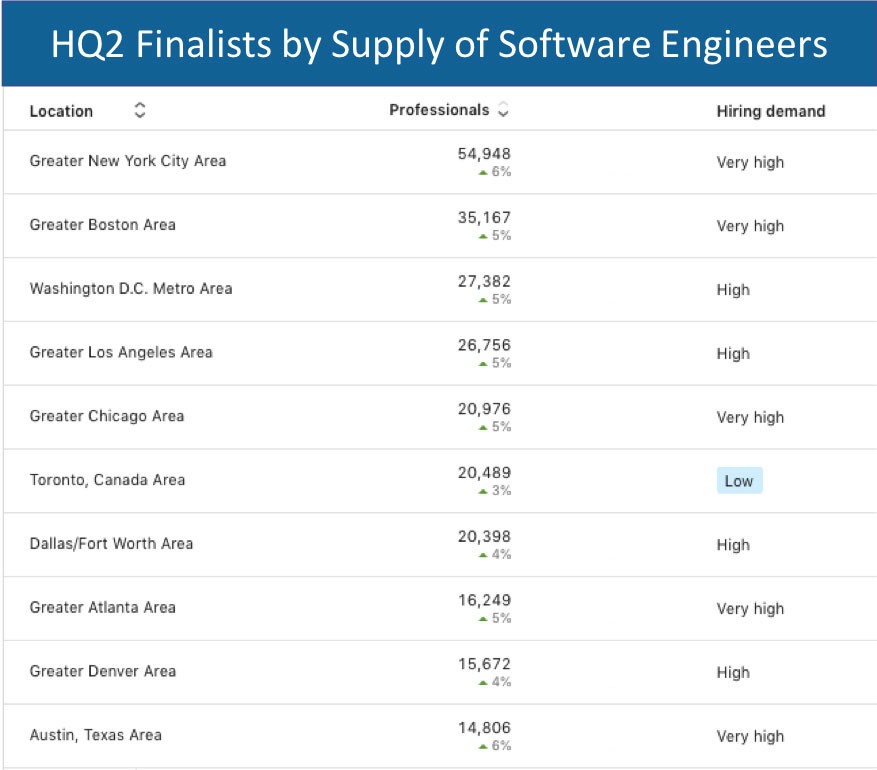 But sheer volume of software engineers only gives us one perspective. Talent pool growth is another important factor to consider when choosing a new office location. Fortunately, the growth rate of software engineers in each market is on par or above the average for all of North America, which is +5%. That means Amazon will enjoy a consistent supply of new talent moving to those regions and entering the workforce—and growth might even increase as a result of this announcement.

Competition for software engineers is lower in D.C. than in NYC

The D.C. area may have fewer software engineers overall, but competition is slightly lower than in Greater New York City. If we look at hiring demand, which is measured by the number of InMails sent by recruiters in the area to software engineers, D.C. is rated “high” vs. NYC’s “very high.”

That increased competition could be due to the presence of other large tech companies in NYC like Google and IBM—both top five employers in the region. 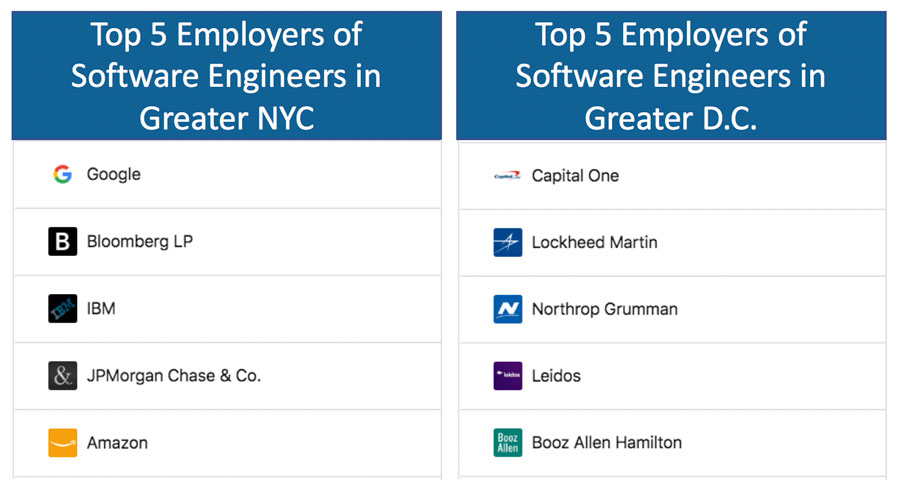 As you might expect, defense and space companies are bigger in the D.C. area, with Lockheed Martin and Northrop Grumman being two of the top five employers of software engineers.

The industries in D.C. and NYC pair well with those in Seattle

One thing to consider when opening up a new office location is which industries are employing the talent you need. The top industries for software engineers in D.C. and NYC are interesting in the way they complement the top industries in Seattle, Washington, home of Amazon’s first headquarters. Most notably, D.C. has a lot of software engineering talent with defense experience, as defense and space is the third-largest industry employing this talent. This move makes sense for Amazon, who is favored to win the $10B “JEDI” contract from the Pentagon.

For the Greater New York City area, marketing and advertising and financial services are two key industries currently employing software engineers and neither of the two have a presence in Seattle. Why does this matter? If Amazon is looking to diversify its offerings and expand into new verticals—which they are likely to do—they’ll need talent with not only functional expertise, but industry knowledge as well. 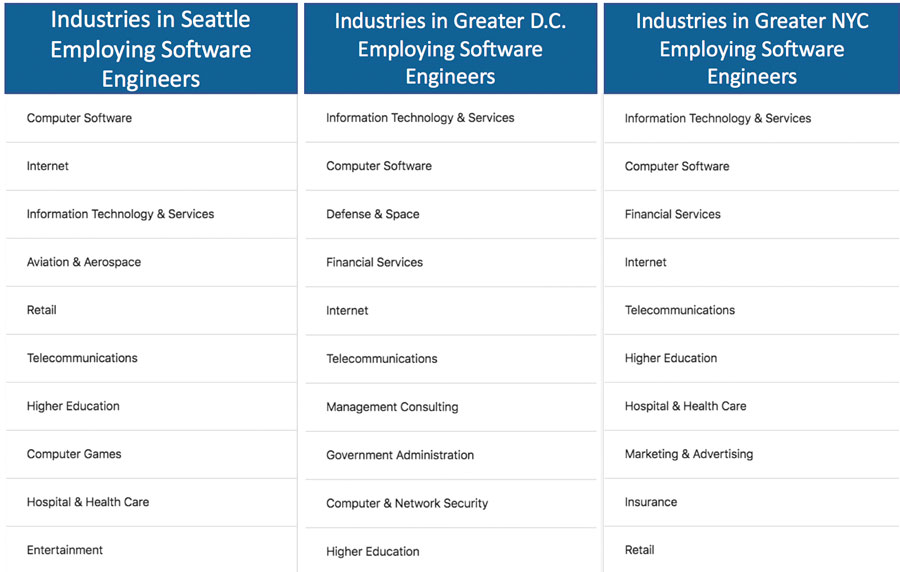 Choosing a new office location is never easy—especially when your office is the size of a small city. But the right data and insights can remove a lot of the guesswork. One thing is for sure: Amazon HQ2 won’t be short on software engineering talent anytime soon.

The analysis above was produced using LinkedIn Talent Insights in November 2018.

In this post, we use Greater New York City Area as an approximation for both New York City and Newark, New Jersey, and the Washington D.C. Metro Area as an approximation for Northern Virginia, Montgomery County, and Washington D.C. LinkedIn determines members’ locations based on the cities, regions or countries that members list in their LinkedIn profiles.