How Hiring Women Has Changed Over the Last 8 Years

At the end of this summer’s Olympic games, the US team brought home 121 medals (50 more than the runner-up). When asked about what makes the team so successful, the US Olympic committee acknowledged that aside from the incredible talent of the athletes, there is one powerful secret ingredient: diversity.

"Our teams that win medals look like our fan base, and that's important […]because diversity equals winning,” says Jason Thompson, director of diversity and inclusion for the USOC.

Diversity is also becoming one of the main priorities for companies worldwide -- over 37% of talent acquisition leaders believe that in fact it will be the number one trend that will define the future of hiring.

As part of our effort to understand the evolution of the workforce, we were interested in taking a closer look at how gender diversity has progressed over the last decade -- has the gap between men and women in the workforce closed down and how has this affected companies hiring strategies? Are HR and talent acquisition departments worldwide taking meaningful steps to create companies representative of their clientbase?

To figure that out, we tapped into the Linkedin Economic Graph, analyzed millions of member profiles across the globe, and compared the rate at which men and women are being hired across 12 industries -- with a detailed look at leadership positions and software engineers. We also explored a snapshot of how 10 countries have differed in their hiring of women.

Here are our findings:

While the percentage of new hires who are women is slowly growing, women are still considerably underrepresented in leadership roles

Out of the 10 countries in our analysis, companies in India have experienced the largest increase in hiring of women since 2008. Several Western European countries like France, Italy, and the United Kingdom have also made large strides. In contrast, Spain, which already had a high rate of women being hired in 2008, has remained relatively flat over the last eight years.

Certain sectors are twice as likely to hire women

According to our data, women are hired at a greater rate than men in certain sectors. For example, across all roles, the government/education/non-profit and healthcare and pharmaceutical industries hire more women than men each year. 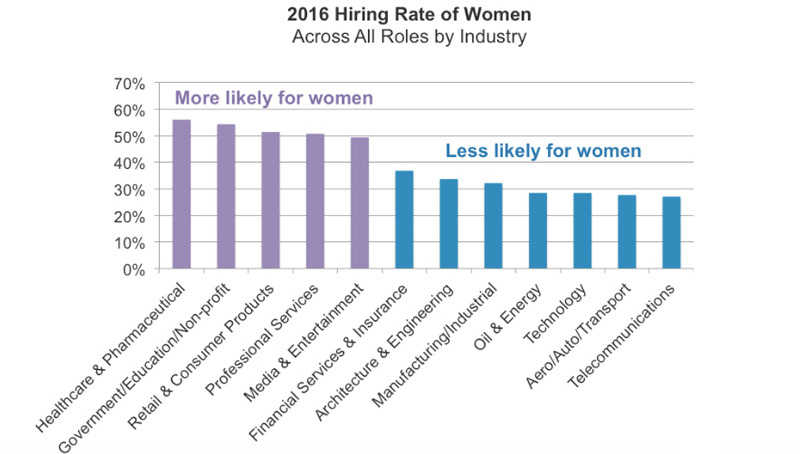 But change is brewing. For example, the technology industry has made the biggest strides in hiring women across all roles between 2008 and 2016, with a 24.4% increase in the annual rate of female new hires. Conversely, the rate at which the financial services and insurance industries are hiring women has barely changed over the last eight years, with only a 2.9% total increase between 2008 and 2016.

We also evaluated the rate at which women are hired for leadership roles (director level and above). Note that the hiring rates are somewhat correlated with the overall representation of women in an industry (e.g., there are more female leaders in the government/education/non-profit industry because there are more women in that industry). The technology industry again comes out on top in terms of making the biggest strides, while oil and energy has backpedaled, decreased its hiring of women into leadership roles by 4.8% between 2008 and 2016.

While we’ve seen big strides made between 2008 and 2016 regarding the hiring of women for engineering jobs, there is still lots of room for progress. In general, industries with lower hiring rates of women appear to have had an easier time increasing the number of women they hire for engineering jobs. The one exception is the government/education/non-profit industry, which while being the sector that traditionally hires female software engineers at the highest rates, achieved the second biggest increase in its hiring rate.

As I mentioned earlier, our data illustrates that women have entered the workforce, leadership, and engineering jobs at higher rates since the end of 2008. But while progress has been made, there’s still a ton of room for improvement.

The results of this analysis represent the world as seen through the lens of LinkedIn data. As such, it is influenced by how members choose to use the site, which can vary based on professional, social, and regional culture, as well as overall site availability and accessibility. These variances were not accounted for in the analysis.

Keen observers will note that there is no field for gender on the LinkedIn profile. We have inferred the gender of members included in this analysis by classifying their first names as either male or female. Members whose gender could not be inferred from their first names weren’t included in the analysis. Additionally, we excluded all members in countries where less than 67% of the respective member base could be classified as either male or female, to account for coverage lapses in our gender classifier.