LinkedIn Data Shows That Job-Hopping is Accelerating (Particularly Among Women)

Next month millions of college students will graduate and enter the workforce. That’s great news because it provides recruiters like you and me with a new pool of talent to tap into. But recruiting them is merely half the battle, since they’re likely to change employers three times their first five years after graduating. Or so our Economist Guy Berger tells me.

His team recently used the Economic Graph to find out whether or not job-hopping is increasing; which industries experience the most and least job-hopping; and whether men job-hop more than women. Here’s what we uncovered:

But will recent grads keep up the job-hopping pace five to 10 years into working? Nope! Every graduated group mellow outed over the course of their careers. Still, younger generations are likely to work for more companies in the second decade of their careers than previous generations did. 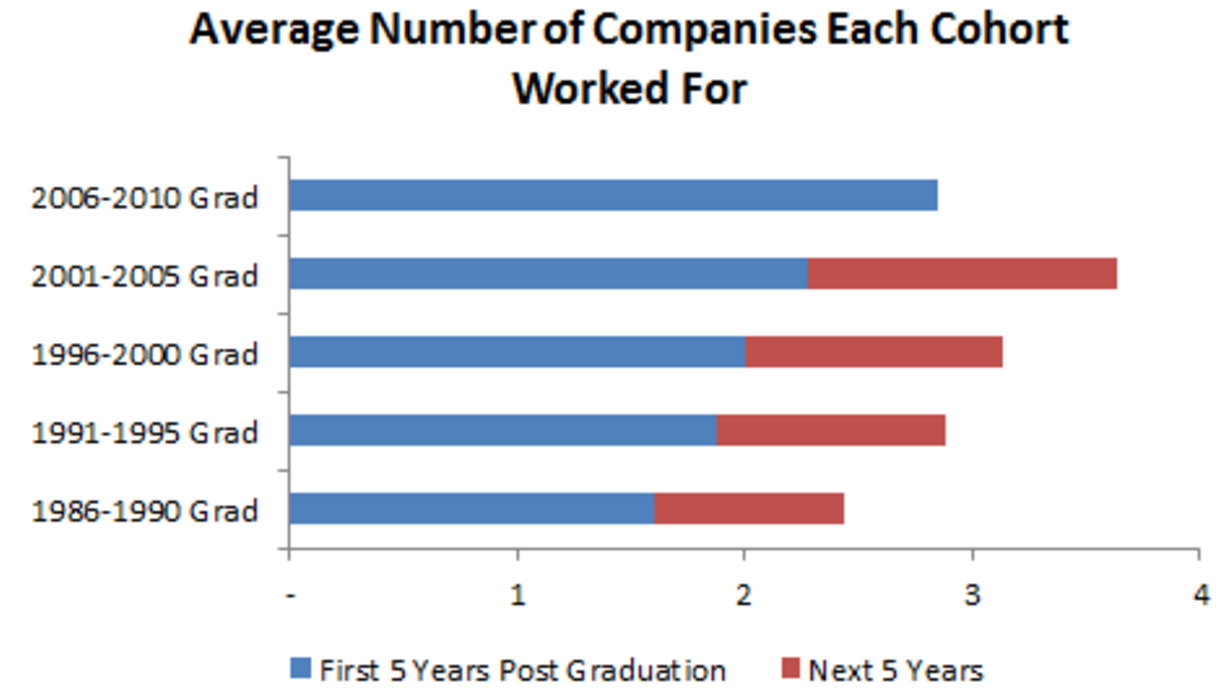 Interestingly, professionals who ended up in the Media & Entertainment, Professional Services, and Government/Education/Non-Profits industries job-hopped the most the five years after they graduated. Whereas the  Oil & Energy, Manufacturing/Industrial, and Aero/Auto/Transport industries are where the 2006-2010 grads group who job-hopped the least the five years after they graduated ended up. 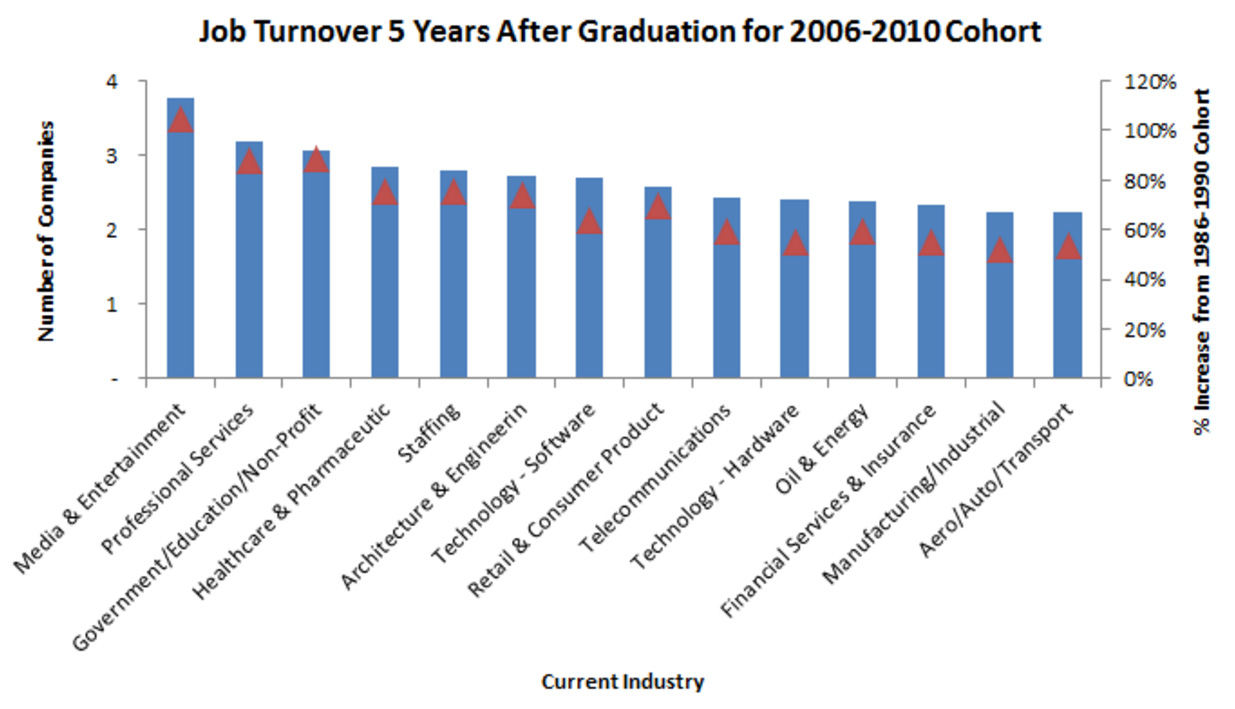 While job-hopping is common among both genders, women job-hop slightly more than men. The differences aren’t statistically significant, the gap is the widest we’ve seen to date among the most recent college grads (2006-2010). 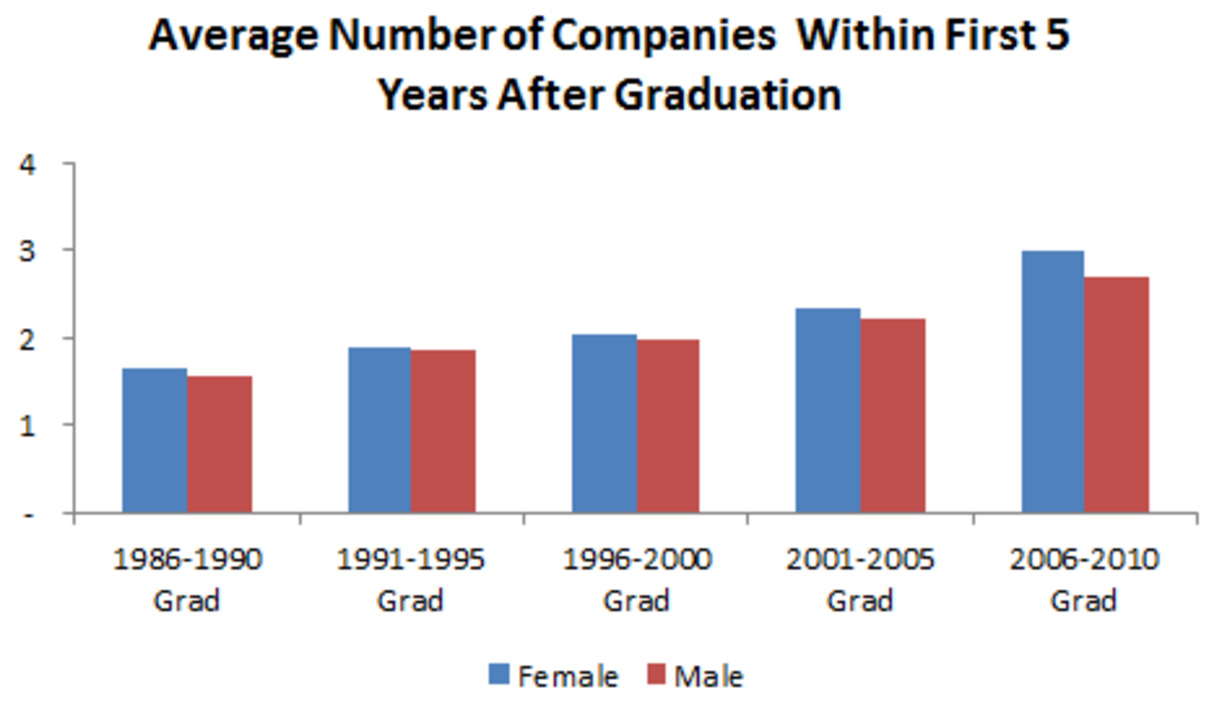 So what does this mean for you and other recruiters?

For starters, job-hopping isn’t going anywhere. If anything, it’s going to speed up. That means retention is as crucial to your company’s success as hiring rockstars; especially if you work in the Media & Entertainment, Professional Services, and Government/Education/Non-Profits industries. Here are some of my tips for retaining Millennials and recent grads:

These insights are courtesy of our Economist Guy Berger. If you’d like to see his latest and greatest insights, be sure to follow him on LinkedIn.

The results of this analysis represent the world seen through the lens of LinkedIn data. As such, it is influenced by how members choose to use the site, which can vary based on professional, social, and regional culture. These variances were not accounted for in the analysis.

For our basic unit of observation, we split college graduates in the United States since 1986 into 5 half-decade groups (1986-1990, 1991-1995, ... , 2006-2010). We used year of graduation with bachelor’s degree. We also restricted our sample to individuals who reported starting a job within one year of finishing college and have had LinkedIn activity within the past month. We did this to reduce the possibility that some older graduates may be omitting early work experiences from their LinkedIn profiles (maybe because they consider their early experiences less significant or not relevant to their current career goals) and to make sure we were only considering profiles that were most likely up to date.