That’s far too large of a number to ignore. It would be impossible for an organization to compete globally going forward, without having a strong talent pipeline in India (if they don’t already).

But that’s pretty broad ­– where exactly should start looking for talent? What are the Indian cities that have an abundance of the type of talent you are going after?

We sought to help. Recently, we used LinkedIn data to find the dominant skills among professionals in each Indian city. From that, you can determine the best cities in India to look for talent, depending on what your needs are.

To see the comprehensive results of skills supply for most of India’s major cities, explore this interactive visualization.

Note: if you have trouble opening the interactive visualization, try a different browser or....

Here are the top skills across four of the country’s busiest cities: 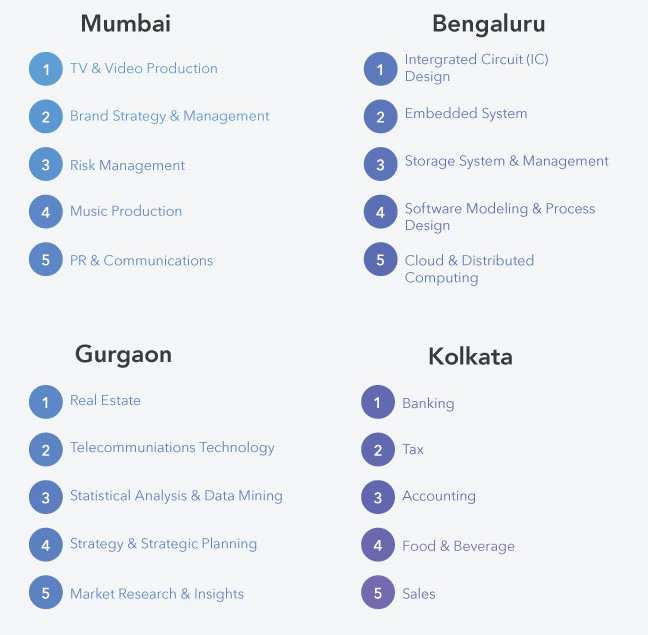 Some of the biggest takeaways from the report

What jumped out to us from the numbers? Here are a few things:

Since there are thousands of skills that an individual can list on his/her LinkedIn profile, we grouped these skills into skill categories. Then, we looked at these skill categories present in our cities of interest and compared their distribution to the regional average. For example, if x% of professionals in India specialize in cloud skills, we looked at the relative concentration of the professionals in each region to come up with the top skills per region.

The results of this analysis represent the world seen through the lens of LinkedIn data. As such, it is influenced by how members choose to use the site, which can vary based on professional, social, and regional culture, as well as overall site availability and accessibility. These variances were not accounted for in the analysis.