The Top 50 Startups Where Talent Wants to Work

The word “startups” has become synonymous with young companies willing to disrupt stodgy industries or completely transform the way we do things as consumers.

And today, we are excited to release the 2017 Top Startups ranking -- a new addition of the Top Companies list that maps the 50 most sought-after startups based in the U.S.

To put the list together, we analyzed billions of interactions between professionals and companies that were founded less than 10 years ago and received at least one round of VC funding. Our goal was to determine which of these companies generate the most interest among professionals and are the most desirable employers.

Without further ado, here are the top 10 winners, and for the full list of 50, visit this page. 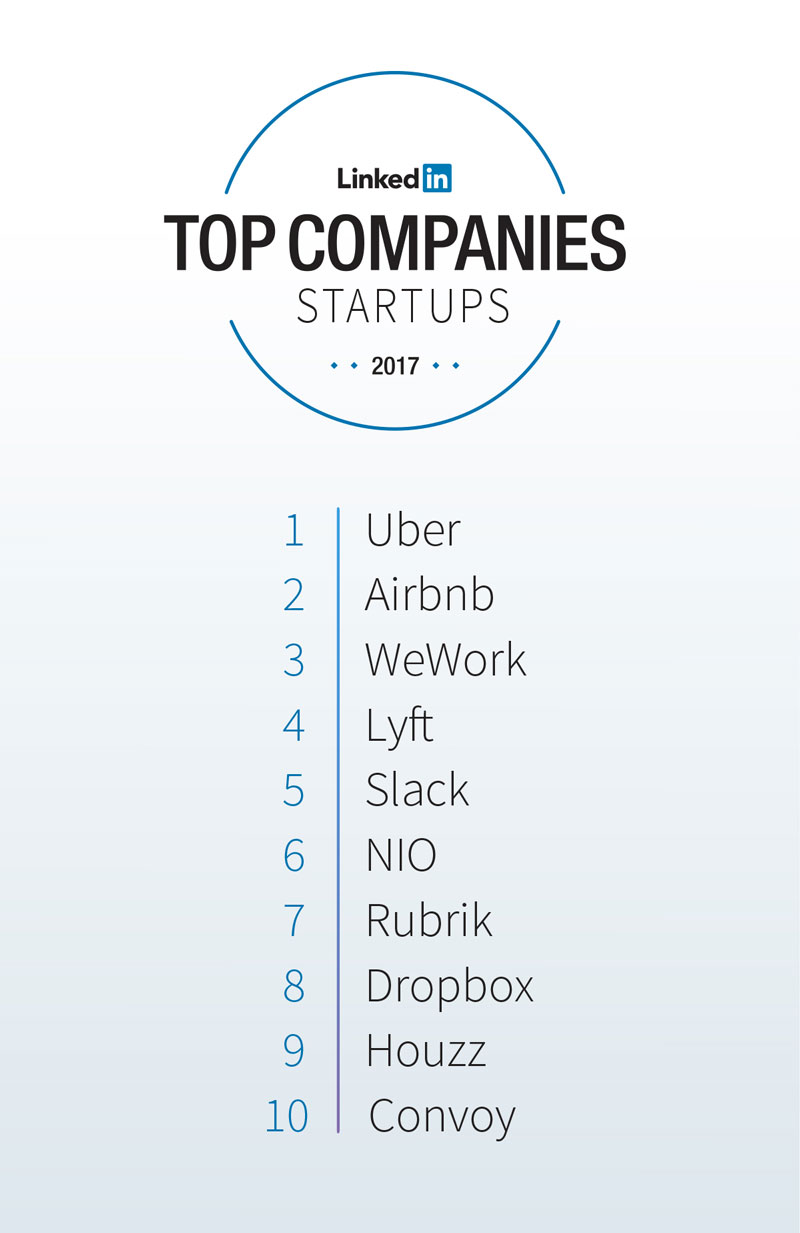 Heartfelt congrats to the winners -- making it on this list is a testament to both the daring innovations of your company as well as the strong employer brands you have built in such a short time!

Interesting themes about the Top Startups

While it might be tempting to equate startups with the tech industry, there is a big variety of companies in our top 50 list. More than half of those ranked are in industries like education (General Assembly #11, Udacity #19, etc.), retail (Stitch Fix #32, Moda Operandi #43, etc.), finance (Stripe #12, Affirm #27, etc.) and healthcare (GRAIL #17).

Other interesting patterns that emerged:

Tips for recruiting top talent as a startup

The companies that made the list got there because they’ve hired and retained extraordinary talent. As a small startup, attracting great talent can be a challenge -- especially when you’re just starting out. You’re approach has to be different from what the big guys are doing.

Tammy Han of First Round Capital, a seed-stage investment firm, which helped fund past startups like Uber, TaskRabbit, Warby Parker, and more, has some useful recruiting tips that startups and new companies in all industries can use:

1. Go with what you know - mine through your network: if you're a startup that has limited resources, it's essential to start with the people who are already in your corner. "So many times there are people that are not immediately obvious but they're in plain sight," says Tammy.

2. Have someone who dedicates at least 50% of their time to recruiting: Most early-stage companies don't have a recruiter on staff, which means it becomes an already over-extended CEO’s job. According to Tammy, someone needs to be dedicated at least half their time. "You can't expect to have talented people at your company happen magically or through luck," she says.

3. Be candid with candidates about the less-than-pleasant realities of the job: Working at early-stage startups may involve a significant pay cut (in exchange for equity), a chaotic, deadline-driven atmosphere, and a stressful workload, shouldering the responsibilities of multiple individuals. Tammy says it's important to be direct and upfront about those topics early in the process.

Read the full blog post for all 9 of Tammy’s tips and more details.

How we determined the winners

Together with CB Insights, LinkedIn evaluated four key factors to determine the winners: