These are the Best U.S. Cities for Recruiting Sales, Operations, and Engineering Talent

If you are recruiting engineering, operations, and sales talent, then you are having a hell of a year. According to the Global Recruiting Trends 2017 report, these three roles are the highest priority to fill for recruiters across the world!

Obviously this means that there is a lot of competition and you need every little bit of intel in order to stand out and shape a sound recruiting strategy. To help with that, we dug into our rich LinkedIn data and pulled out valuable information to help you find and attract sales, operations and engineering professionals.

Talent-dense locations: Engineering on the coasts, Sales in the South, and Operations in the Midwest and Southeast

Top 10 Hubs for Engineering, Sales, and Operations Functions in the United States 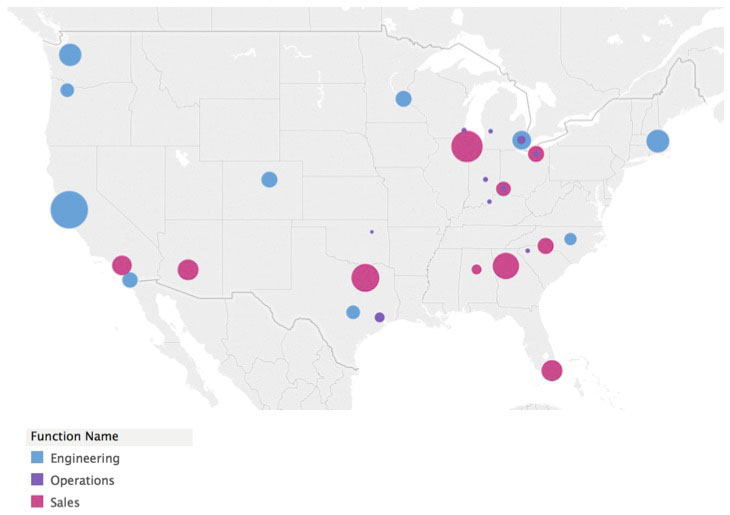 As you might guess, the areas with the highest density of engineering talent dot our coastlines: familiar hubs like Silicon Valley, Seattle, Boston, and Portland rise high above the rest. Sales hubs tend to congregate in the Southern US—with the notable exceptions of Chicago and Ohio. Operational talent centers around the Midwest, in metro areas around cities like Detroit, Milwaukee, Indianapolis, and Cleveland.

Below we’ve visualized the map results by talent density; take a peek and see where your metro area ranks. 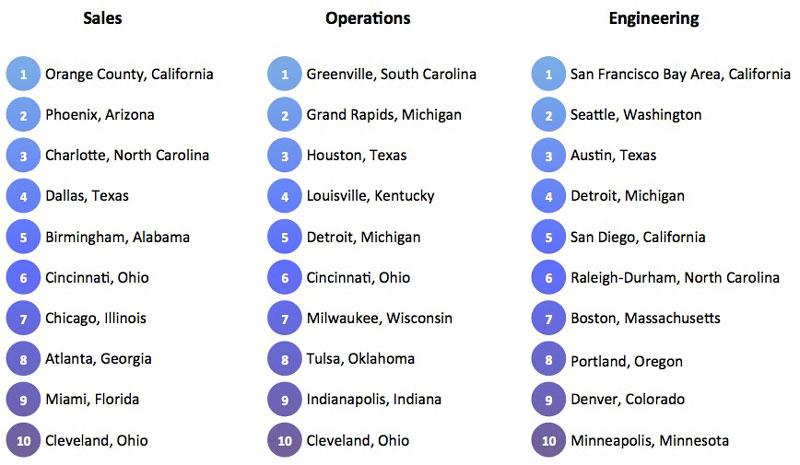 Oftentimes, high density is conflated with high demand; however, our analysis reveals that high density doesn’t necessarily translate to high demand. Below, we’ll focus on how recruiters can optimize their hiring time by integrating the insights around talent demand and density into their sourcing and offer strategy. 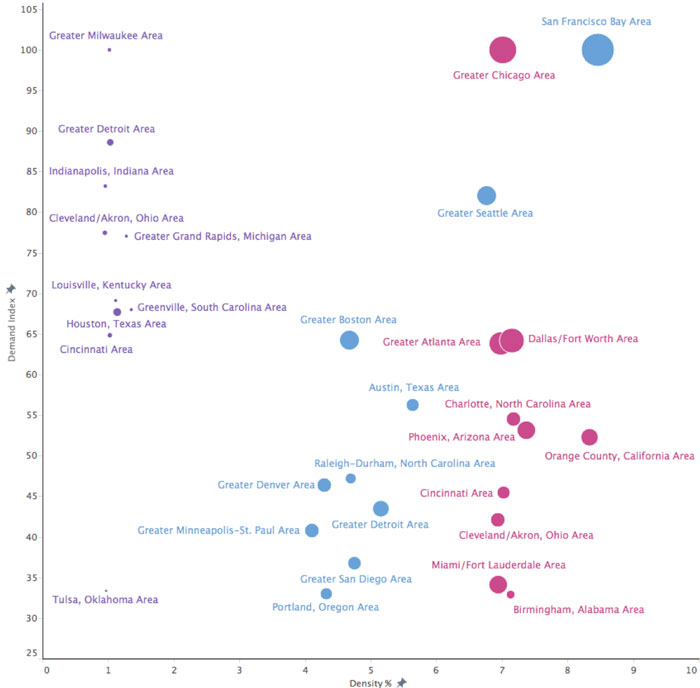 Demand is calculated as the average number of recruiter InMails received per member in 2016. Bubble size indicates number of LinkedIn members by function in each metro area.

If you’re a recruiter sourcing for any of these functions in the United States, the hubs in the chart above are a great place to start building a pipeline of candidates. To optimize your time, focus on sourcing from regions that have high density but relatively low demand compared to other hubs within each function.

Here are a few specific insights to illustrate some of the nuance and interplay between demand and density across metro areas:

For a deep dive on top industries, employers and occupations per function, please see the appendix.

As discussed above, expanding your recruiting efforts to lower-demand, high density regions can be a great way to build your pipeline of qualified talent. But if you’re tasked with the challenge of recruiting in a region with high demand for talent, simply focusing on density and demand is not enough. Density and demand can be attractive elements for candidates, but a metro area’s affordability—a measure of cost-of-living divided by average salary—might be one of its most enticing advantages. Read on to learn more about how each region stacks up when it comes to affordability.

In high-demand, low-density environments, it can be challenging to fill open positions. In these cases, it’s good to know where your region ranks against other areas in terms of affordability. Expanding your candidate search to other regions that have a higher density of talent but which are also less affordable may help you fill those positions more quickly. 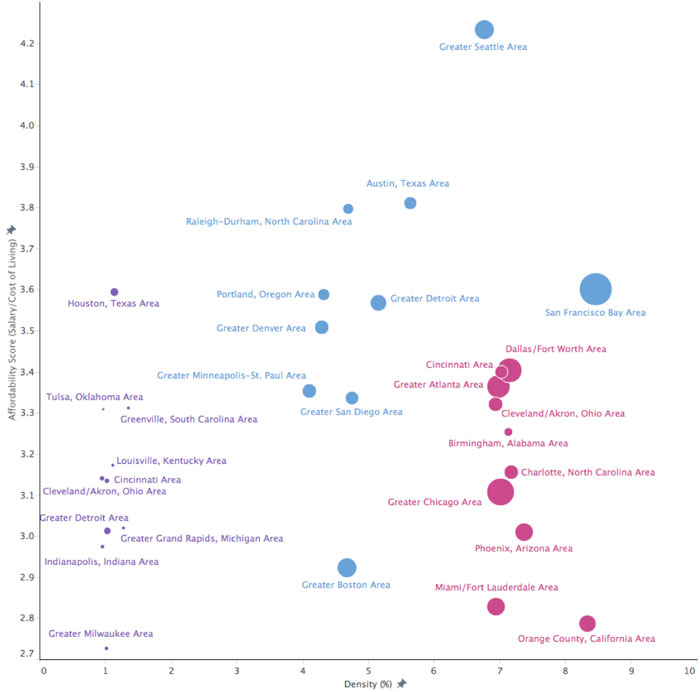 That’s because affordability doesn’t reflect raw salaries or costs-of-living: it’s the relationship between the two numbers. So while the cost-of-living in Silicon Valley is much higher than that of Detroit, the higher salaries in San Francisco more than make up for the expenses—and while Detroit offers lower salaries on average, the low cost-of-living makes up the difference. In both areas, employees’ salaries go farther than average.

If you’re recruiting for opportunities based in an affordable high-density city like Seattle or Austin, you can highlight both the dense community of like-minded individuals and the greater purchasing power of candidates’ dollars as key benefits.

If you’re recruiting for a less affordable market like Boston or the Miami-Fort Lauderdale area, you’ll need to look for ways to differentiate your offer, perhaps by bumping up your perks or salary packages. High-density, low-affordability areas may also be easier pools of talent to attract to cities ranked higher on the affordability scale.

Wherever you’re based, it never hurts to know where you stand relative to other metro areas around the country. Learn about your local markets, adjust your tactics according to their strengths and weaknesses, and leverage LinkedIn’s insights to draw the best talent to your city.

Curious to see examples of the top industries, occupations and employers featured in this study? Read on for a sampling from each of the functions analyzed.

Data aggregated from public LinkedIn profiles. Function is inferred from job title. Affordability index is calculated by dividing the average annual salary (for that function in that area) by the average annualized cost of living for each metro area. Cost of living data is sourced and calculated from the Economic Policy Institute for a 2-adult, 1-child household based on average household size from the November 2016 Bureau of Labor Statistics report. Density is calculated as the number of LinkedIn members in a particular function and metro area divided by the total number of LinkedIn members in that metro area.  Within each function, only occupations whose members received on average at least 1 recruiter InMail in 2016 were selected for the analysis.