The Top Industries Gaining and Losing Millennials, According to LinkedIn Data

There are a lot of stereotypes out there about millennials, those born between 1980 and 1996. They love avocado toast (apparently too much). They eschew once beloved products and pastimes, like bar soap and golf. And they’re prone to dramatic gestures to get what they want, like reinventing their careers as serial job-hoppers. But that last one isn’t just a stereotype—it’s true. 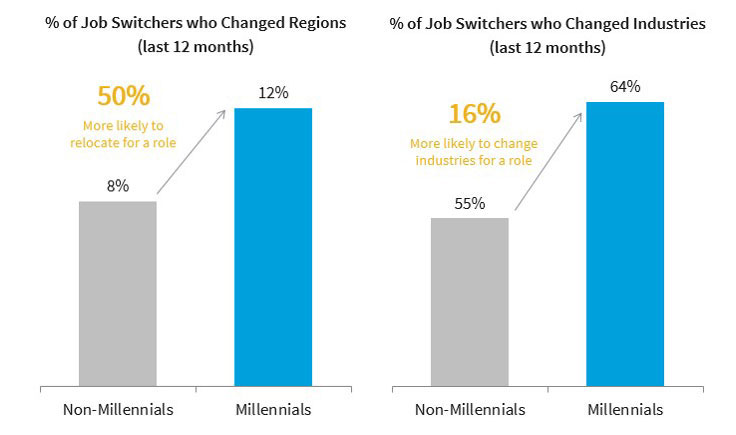 To many recruiters, hiring millennials is still a big mystery. In order to learn the best ways to attract and recruit this generation, you should first understand which industries they’re moving to, which they’re leaving from, and why.

Tech, healthcare and finance are attracting the most millennial job switchers 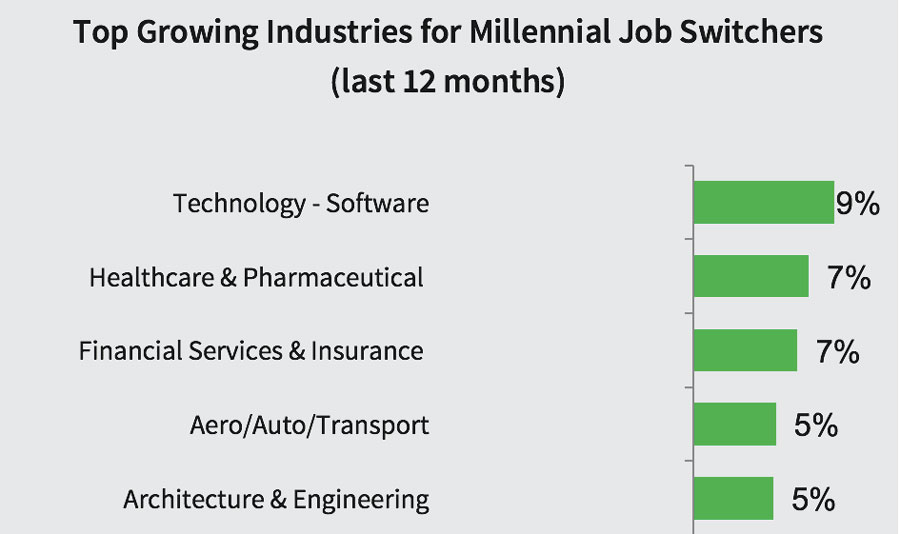 More than any other industry, tech/software was the top landing spot for millennials who changed jobs in 2016, embracing roles like software developers and salespeople.

Tech already has a millennial-heavy workforce. With its job and income growth, impressive perks, and deeper sense of purpose, it’s not surprising that the tech industry appeals to the millennial worker. But there’s another factor at hand here: based on LinkedIn profile data, millennials are also significantly more likely to be skilled in IT/software programming skills like C/C++, application development, and computer design than their non-millennial counterparts. 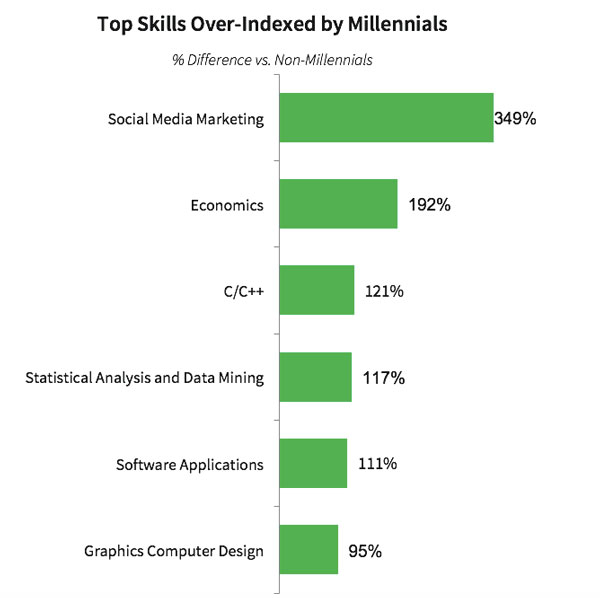 While these tech skills are largely concentrated in the tech industry, millennials are also moving to software development roles in other growing industries as well, like finance, healthcare, and auto/aerospace, which can account for some of the growth in those industries.

LinkedIn survey data shows that millennials value different things in a career opportunity than non-millennials. Millennials are significantly more likely to cite a strong career path and strong employee development opportunities as qualities they care about in a job, and the most frequently cited reason by millennials for leaving a job is a lack of opportunities for career advancement. Since tech is generally seen as a growing, supportive industry, it makes sense that many millennials are attracted to the career prospects it seems to promise.

So what does this mean for non-tech recruiters? If you’re recruiting millennials outside of tech—perhaps in a more traditional industry—emphasize your company’s opportunities for professional growth and career advancement to bring more millennials into the fold.

According to a LinkedIn survey of members who switched jobs in 2016, the most frequently cited reason by millennials for leaving a job was a lack of opportunities for career advancement, followed closely by dissatisfaction with compensation/benefits. Despite being called self-centered, lazy, and mercurial, the majority of millennials want steady jobs with regular benefits and paychecks from employers. This may explain the growth we see in millennials joining more traditional industries like healthcare and finance.

While millennials who changed industries in 2016 flocked to tech more than any other industry, healthcare came in as a close second, with millennials joining roles as medical assistants, students, and nurses.

Finance was the third-biggest gainer of millennial job switchers, which might reflect a successful industry-wide rebranding effort: trying to mimic tech’s millennial magnetism, finance companies have increasingly tried to rebrand themselves as tech companies to attract skilled millennial engineers.

Retail, government/education/nonprofit, and media are losing the most millennial job switchers 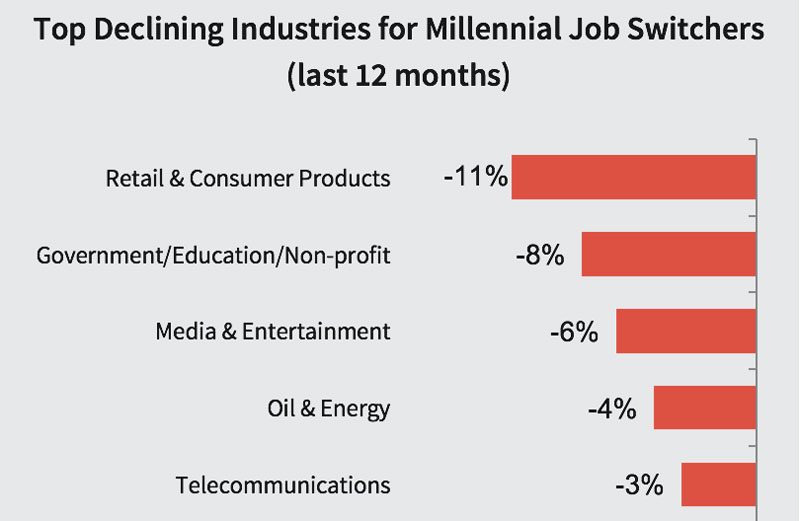 Based on job switching activity in 2016, millennials are moving away from roles in retail, government and education. Younger employees seem to be abandoning their retail jobs in favor of school and flocking to roles in growing industries like tech and healthcare as software developers, salespeople, and medical professionals.

It might not be surprising that millennials are leaving roles in retail as they advance in their careers, since the industry tends to be bottom-heavy with entry-level positions. The decline in millennials in government roles may be less obvious. According to the Washington Post, the loss of young workers in government jobs is related to more difficult realities of the industry, like federal shutdowns, furloughs, pay freezes, and a frustrating hiring process.

On top of that, government agencies are struggling to attract young employees because these employers typically offer lower wages but more generous benefits. “[Young people] frankly have student loans and aren’t as concerned about health insurance and retirement and those type of things,” said Leslie Scott, executive director of the National Association of State Personnel Executives. “The compensation mix traditionally just isn't as flexible for the needs of what we might see as a younger employee." If possible, government employers may be able to attract more millennials by offering less benefits and more salary.

While it seems well established that millennials in tech are in high demand, it might surprise some recruiters to learn that the demand for these professionals has actually stayed relatively stagnant compared to other industries. According to LinkedIn InMail data, millennials in tech are receiving the most InMail outreach from recruiters, and this pattern has remained consistent over the last few years.

The industries with the fastest-growing demand for millennials are actually the auto/aerospace and engineering  industries. If you’re recruiting within one of these industries, now may be the best time to double down on your branding and outreach efforts. Competition for millennial candidates in these industries has gotten a lot fiercer, and may continue to become more difficult as time goes on.

As millennials continue to ascend in the workforce, the need to attract and retain this generation is more important than ever. While some industry movement reflects natural career progression, it’s time to start asking if you’re doing everything you can to engage these avocado-toast loving employees—and that includes utilizing their top skills, appealing to their unique sensibilities, and encouraging their professional development.

A few articles with tips on how to appeal to millennials: