The U.S. Cities That Gained and Lost the Most Talent in the Past Year

Sorry, San Francisco, but people are trading in the breathtaking views of the red-hued Golden Gate Bridge for Denver's snowy slopes and Seattle’s futuristic Space Needle.

That’s according to LinkedIn’s April U.S. Workforce Report, which shows that since February 2017, the number of workers moving to San Francisco has dropped an astonishing 41% in favor of emerging tech hubs (and cities with, well, a much cheaper cost of living).

Based on LinkedIn data, the report gives us a look at where talent is coming and going in the U.S. and more. This info can help any organization understand where there are talent pools they might be overlooking – and even make big decisions around the best locations for opening new offices. To give you a snapshot, we’ve listed the cities that gained and lost the most talent over the past year as well as some insight into why these trends are happening. Let’s take a look:

Denver, Austin, and Seattle gained the most talent

After measuring member locations in the top 50 cities in the U.S., Denver came out on top as the biggest attractor of talent. For every 10,000 LinkedIn members in Denver, 71.6 of them arrived in just the past year: 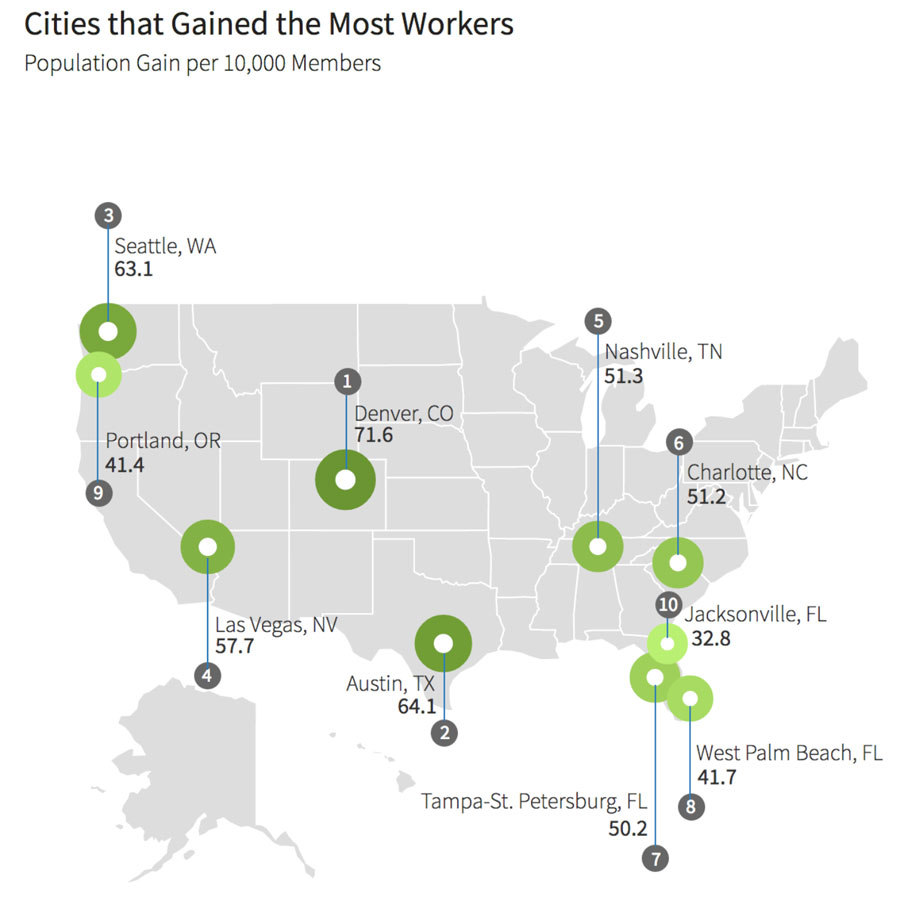 After Denver, Austin and Seattle gained the most talent, followed by Las Vegas and Nashville.

It makes sense that the biggest winners are growing tech hubs that offer lower costs of living compared to the Bay Area. For instance, Nashville has emerged in recent years as an up-and-coming city for tech companies looking to get their start, according to a 2017 report (and it’s also on the shortlist to become the location of Amazon’s second headquarters).

Meanwhile, Denver has been cited as another city drawing talent away from San Francisco thanks to the city government encouraging startups to the region through infrastructure investments.

Seattle is the number one destination for people leaving San Francisco, according to our report, while less costly commuter towns, like Sacramento, also appear high on the list.

So, if you’re thinking about where you might want to expand your recruiting efforts or even open a new office, the influx of talent in these cities makes them worth considering.

Hartford, Providence, and Pittsburgh lost the most talent

On the flip side, if you're looking for talent in the below cities, know that your talent pool might be a little tighter in the near future. That's because Hartford, CT lost the most talent in the last year, followed by Providence and Pittsburgh: 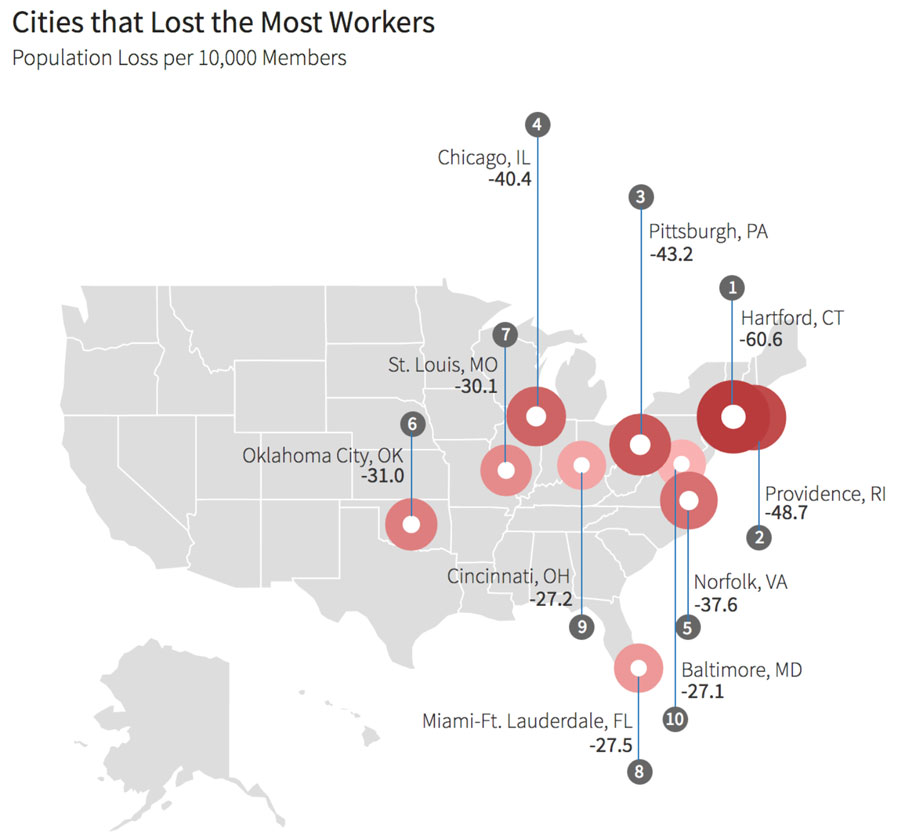 For every 10,000 LinkedIn members in Hartford, 60.6 left in the past year. According to The Hartford Courant, part of this is due to some of the state’s rich residents leaving, citing IRS data. As a result, they’re moving billions of adjusted gross income out of the area.

"While Hartford has lots of engineering jobs that require advanced education, it just doesn't have the dynamism that an Austin, Raleigh or even Boston has," says Economics Professor Emeritus Ed Deak.

In addition, industrial cities such as Pittsburgh, Detroit, Minneapolis, and St. Louis are losing workers to the Bay Area as part of an ongoing trend for the U.S. heartland, according to our report.

Austin, Orange County, and San Diego are experiencing the most total migration

We also took a close look at the U.S. cities that have experienced the most total migration, with the highest number of workers both moving into and out of the city over the last 12 months.

Austin ranked number one, with 586 out of every 10,000 local LinkedIn members either arriving in or leaving the city in the past year. Close behind are Orange County and San Diego, followed by Raleigh-Durham, NC and West Palm Beach, FL: 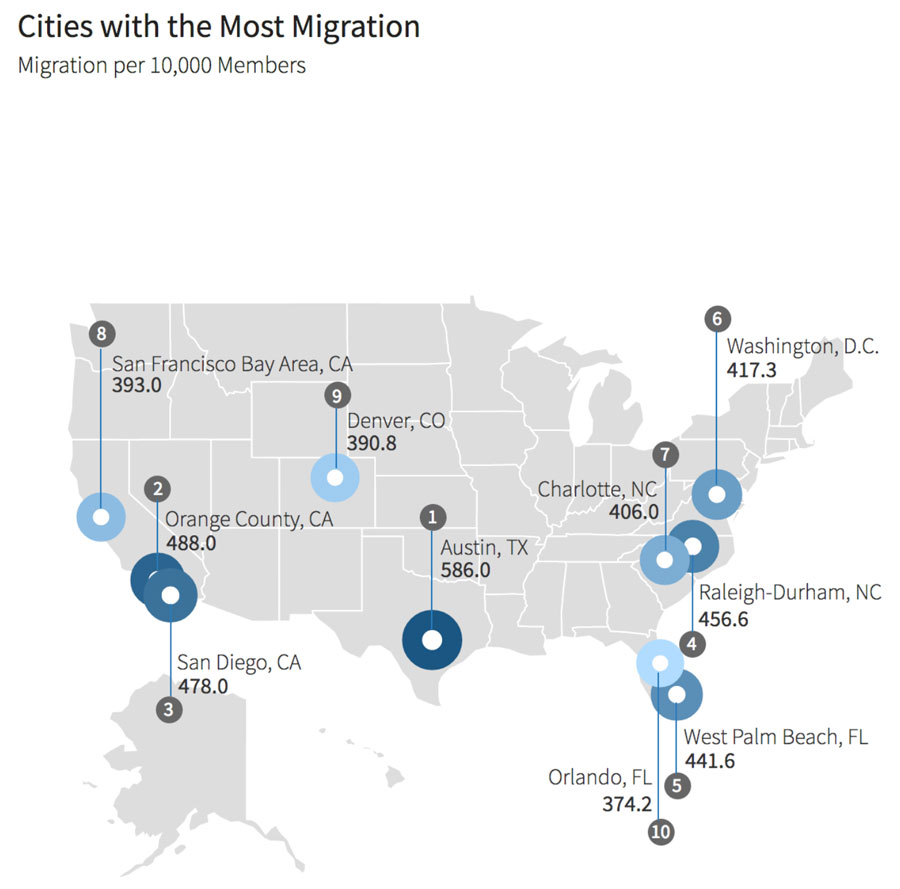 This list naturally includes some of the biggest gainers, like Denver and Austin, while the high total migration in North Carolina cities is partly driven by corporate moves and transfers to other nearby cities.

And while people from all over the country come to the Golden State for its beauty and booming industries, as mentioned the high cost of living has also led many residents to seek out less expensive places to live and work.