4 Reasons It Pays to Share Salary Ranges, According to Companies That Do

In 2017, the British Broadcasting Corporation (BBC) released the salary ranges of some of its highest earners for the very first time. The list immediately sparked controversy, as many women discovered they earned significantly less than their male coworkers — even if they’d been promised equal pay during salary negotiations.

Early last year, some 200 BBC employees sent an open letter to the company calling for full pay transparency. The BBC hasn’t quite gotten there, but the controversy has prompted it to increase its transparency, not batten down the hatches. In the summer of 2018, the company announced it had reduced its gender pay gap from 9.3% to 7.6%. And just last month, it pledged to disclose high-earner salaries in bands of £5,000 (U.S. $6,600) rather than £10,000 to help create more transparency and trust.

The BBC story underscores an important truth about this particular debate: While talking transparently about pay can be uncomfortable, it can also be beneficial in helping ensure fairness and building trust.

LinkedIn’s Global Talent Trends 2019 report surveyed over 5,000 talent professionals across the globe, 27% of whom say their company currently shares salary ranges with employees, candidates, or both. Those respondents shared the key benefits, including efficiency and fairness, they’ve seen since their companies adopted this practice. 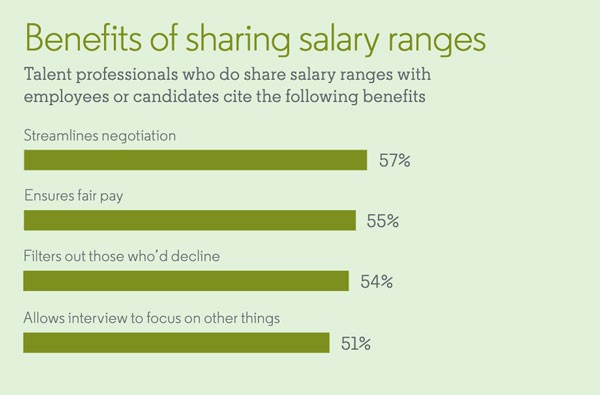 If you’re considering sharing salary ranges at your company, here are the top four reasons to start, according to the early adopters.

1. Sharing a salary range at the start of the hiring process helps streamline pay negotiations later

About a third (34%) of talent professionals who don’t currently disclose salaries say they’re concerned it will limit negotiations. In sharp contrast, those who do share a range report that the No. 1 benefit they’ve seen is more streamlined negotiations, with 57% agreeing they’ve seen this outcome.

By disclosing a salary range early in the hiring process, recruiters can largely eliminate negotiations from the interview. Candidates know what to expect and this allows the conversation to shift to their experience, skills, and potential, which will be the things that determine where they fall on the range.

To make negotiations even more efficient, consider using a formula to accurately determine where on the salary range a candidate should fall. Companies like Buffer do this to take the guesswork out of pay and ensure everyone knows why they make what they do.

2. Revealing a range can ensure that every employee is being paid fairly, building trust

For one thing, female candidates are often less likely to negotiate than their male peers, and even when they do, they face a higher risk of being penalized for it. And this is not just a gender issue. Some people are just better at arguing their case than others, but don’t necessarily deserve to be paid more for it (unless the job calls for such skills). By sharing a range, you can ensure all new hires are paid fairly, regardless of whether they have a silver tongue.

What’s more, as the BBC example shows, sharing salary ranges can reveal inequalities among current employees that may have existed for decades. In the past, many companies have frowned upon coworkers discussing salaries among themselves, making it difficult or impossible for employees to know if they’re being paid fairly.

A culture of secrecy can create a lot of distrust, especially for minority employees and candidates who have historically been underpaid. Even at companies that have pay equity, when employees have no way of checking, many assume they’re being underpaid.

“Pay transparency removes the distrust people have,” Leslie Miley, CTO at the Obama Foundation, explains in the report. “As an African American, I’m always distrustful because all the data supports that I’m going to be paid less. If you come out and say, ‘This is what our salary is, these are the ranges,’ that’s going to build trust.”

If disclosing salary ranges reveals inequalities at your company, use the data as an opportunity to close those gaps.

By acknowledging the issue and taking measures to address it, you show employees and candidates alike that your company cares about these issues and is committed to paying everyone fairly.

3. Letting candidates know the range early on filters out those who would decline an offer based on pay

It’s deflating to spend weeks, even months, nurturing a strong candidate only to have them decline an offer when you reveal the salary. It isn’t a productive use of their time or yours, and it can leave a bad taste in everyone’s mouth.

That’s why 54% of the respondents from pay-transparent companies agree that sharing a salary range up front helps filter out candidates who would decline an offer, improving the efficiency of the process.

For some candidates, pay is less important than other factors, like a viable work-life balance or the ability to work remotely. But money will always matter. Candidates need to know that their paycheck will meet their financial needs. To find out at the very end of the hiring process that the pay isn’t sustainable can be devastating. If candidates feel their time has been badly used, it will sour their opinion of the brand.

By being clear about a position’s salary range, you empower candidates to self-select out of the process early. This allows you to spend your time on the candidates who can see themselves accepting an offer from your company.

4. Getting money out of the way allows you to explore other things during the interview

Talking about money can be awkward for everyone involved. And when the prospect of discussing salary hangs over the conversation, it can taint the whole interview. Candidates spend half the time steeling themselves to negotiate, while you sit there worrying that they’re going to ask for too much. It’s just not an effective use of time.

Of the talent professionals who don’t currently share a salary range, about one in three (31%) say they worry it will make the interview dwell too much on pay. But in reality, this doesn’t seem to be the case — with roughly half (51%) of those who do share a range saying it allows them to cover other things during the interview.

When both you and the candidate are on the same page about pay, that awkward discussion is unnecessary. And that means you can dedicate more time to the important stuff like assessing the candidate’s soft skills or determining what motivates them in their work.

With money already taken care of, you can also highlight other perks and benefits your company offers — like vacation days or parental leave — that may win the candidate over. Benefits can sometimes take a back seat to salary, but with the candidate already aware of and comfortable with the salary range, benefits may play a bigger role in their considerations.

Transparency is trending, but many companies are still on the fence

While pay transparency is a big talking point right now, LinkedIn found that just over half (51%) of the talent professionals surveyed say their company doesn’t currently share a salary range and is unlikely to start anytime soon. The vast majority (75%) of those worry that sharing a range will upset employees. But as the BBC found, a little turmoil may be a necessary price to achieve fairness moving forward.

Ultimately, the benefits of adopting pay transparency outweigh the potential downsides. And you can ease into transparency by determining how large the salary bands will be before you share them. For more tips about how to establish pay transparency — and revealing case studies from companies that have embraced it — download the full Global Talent Trends 2019 report today.