Why These 3 Companies Are Sharing How Much Their Employees Make

Pay transparency is one of the most hotly debated topics among HR and TA professionals today. For some, it’s the obvious answer to closing pay gaps, with the added bonus of streamlining salary negotiations with candidates. Others fear it will actually hinder negotiations—and potentially breed bitterness among coworkers.

The adoption rate reflects this uncertainty. According to LinkedIn’s Global Talent Trends 2019 report, 27% of HR and hiring professionals say their company currently shares salary ranges with employees or candidates, with a further 22% saying they’re likely to start within the next 5 years. But for more than half (51%), salaries are still shrouded in secrecy, and that’s unlikely to change anytime soon. 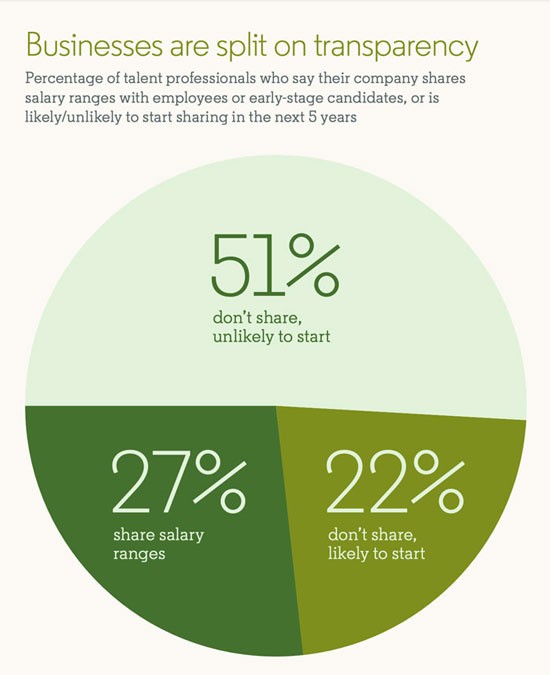 If you’re on the fence about adopting pay transparency at your company, it can help to look at others that have gone before you.

Here are three companies that have made salaries more transparent—and some lessons they’ve learned along the way.

1. Buffer made salaries completely public to live up to its core value of transparency

Of all the companies on this list, Buffer took the most radical approach to pay transparency. In 2013, the social media management platform made the exact salaries of all its employees public—available for anyone to see online. 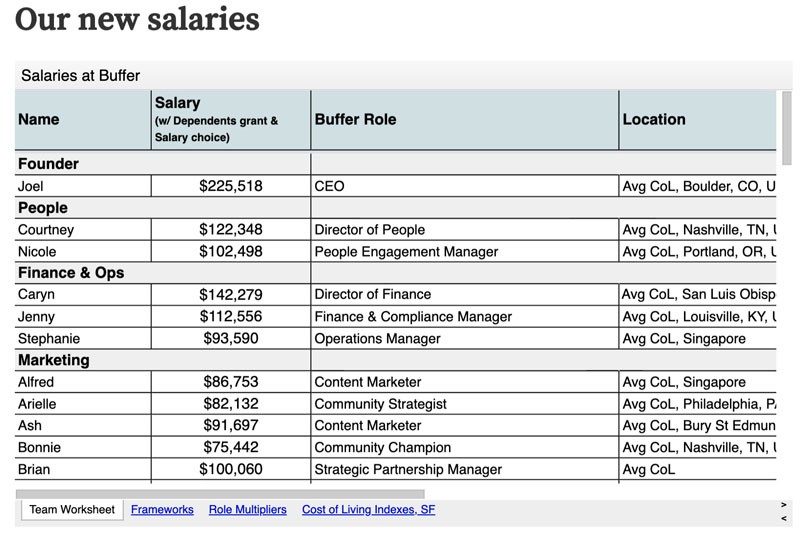 Buffer didn’t made this information public without consulting its employees first. Back in 2013, that was easy—there were only 12 of them. Today, there are 80, but only a handful choose to opt out. You can still see the salary for their role online, but their name is removed.

This bold move is just one way Buffer tries to live up to its “default to transparency” core value. Everything from the company’s equity formula to its diversity figures and real-time revenue is available for anyone to see.

Buffer bakes trust into the process by making its salary formula totally transparent, too. That way, all employees know they’re being paid fairly based on factors like their level of experience and the local cost of living. Over time, the formula has been refined to accommodate raises and promotions, encouraging opportunities for growth.

This extreme move instantly paid off. Within the first 30 days of making its salaries public, Buffer received over twice as many applications as it had the previous month. The company uses internal surveys to check the popularity of the policy, and employees have responded positively.

“Pay transparency has absolutely helped boost trust and morale, and productivity in general,” says Hailley Griffis, Head of Public Relations at Buffer. “Workplace happiness is something that we see in a lot of our employee surveys, too.”

Having a clear policy (like a calculator) that shows employees why they’re being paid what they’re paid can help staff understand the rationale behind their salary, while creating trust. And by tying this rationale back to its core value of transparency, Buffer helped build a meaningful connection for its staff, helping them live the company’s values every day.

Related: See What Happened When These Companies Made Their Employee Salaries Public

If Buffer’s radical approach to pay transparency isn’t for you, take a look at Glitch’s more “traditional” approach to this untraditional practice: instead of sharing exact salaries publicly, they share the salary ranges of roles with candidates and employees.

The software company (formerly known as Fog Creek Software) believes transparency isn’t just about public perception. It’s a tool that companies can use to ensure equality among their staff.

“Transparency isn’t the goal,” explains Anil Dash, Glitch’s CEO, who began a push to improve diversity and inclusion when he joined the company in 2016. “The goal is paying everyone fairly, and transparency forces us to do that.”

Glitch already had pay equity across race and gender before adopting pay transparency. The trouble was, there was no way for employees to know they were being paid fairly. Anil believed transparency would build trust, which in turn would aid retention. So he asked his staff what they thought.

“ The company was doing the right thing, but employees didn’t know,” Anil recalled in 2018. “And employees wanted visibility but because it wasn’t there it seemed like the company was reluctant even though it wasn’t.”

After gathering feedback on the idea during meetings and through anonymous surveys, Glitch decided to share salary ranges, not exact figures. These ranges are known internally and are made clear on its job posts.

Anil says the move toward transparency has been hugely beneficial. Beyond creating trust, it has improved reviews and raises by boosting predictability. And including a salary range as part of the job description has increased the application rate, made candidate feedback more positive, and earned the company praise on social media.

“Ultimately, not many companies are doing this yet,” Anil told Medium. “That’s why we think it’s a competitive advantage for attracting and retaining great people.”

Starting with a salary range can be a good way to dip your toe in the transparency water without diving in headfirst. It’s also a good idea to consult your employees before divulging what they earn, as some may be more comfortable with the idea than others—especially if they’ve been with the company for a while and didn’t sign up for this.

Starbucks takes an altogether different approach to pay transparency: sharing pay equity data with everyone, and pay ranges with candidates when asked (a requirement in some states, but not all).

A decade ago, the coffee giant set out to study wage disparities among its employees (which it calls “partners”) and close any existing gender and race pay gaps. Last year, it announced a major breakthrough—100% pay equity across its U.S. workforce, with a pledge to achieve this in all company-operated markets worldwide.

Pay gaps are still a big problem across virtually every industry. To close existing gaps at the company, Starbucks established three core principles for pay equity: equal footing, transparency, and accountability. As part of Starbucks’ commitment to transparency, the company has committed to publishing its pay equity progress annually, and says it will rapidly address any future discrepancies that it uncovers.

To ensure all employees start their careers on an equal playing field, Starbucks never asks candidates about salary history. Instead, it sets salary ranges before sourcing begins, and bases an individual’s start pay on their skills, abilities, and experience. For store and district managers, the company uses a calculator to determine their wage.

These efforts earned Starbucks a lot of positive publicity, helping boost its employer brand and making it easier to attract great talent. But more importantly, the company says it embraced more transparency because it was the right thing to do.

The first step to closing pay gaps is recognizing they’re there. Before making any decisions about pay transparency, start by performing an internal audit to see how well you’re doing. You might be surprised by what you find.

“We can’t be part of the solution until we know the problem,” says Sara Bowen, former Global Leader of the Inclusion, Diversity, Equity, and Accessibility (IDEA) team at Starbucks. “No one expects your company to be perfect, but they do expect it to be open and honest.”

Show me the money: pay transparency isn’t for everyone, but it can create more trust and fairness

It’s hard to predict how pay transparency will impact your company. But since there are lots of different ways to approach it, you can explore the degree of transparency that your employees and stakeholders are comfortable with.

Whether you choose to go public or not, it doesn’t hurt to do an internal audit to see how pay stacks up. That way, if there are any discrepancies, salaries can be adjusted to close the gaps and increase fairness.

If you do decide to embrace pay transparency, you can look forward to earning more trust from employees, which in turn can boost morale, productivity, and retention.

For more information and tips about pay transparency—along with three other major trends that will transform the workplace in 2019—download LinkedIn’s Global Talent Trends 2019 report today.