Have you ever fretted over the right time to send a LinkedIn InMail to a prospect? Maybe you thought 8 a.m. on a Monday was good, or 4 p.m. on a Thursday was better. And yet, no matter what time you chose, you worried it was the wrong one?

Many recruiters stress about the perfect time because they want to get high response rates and present their company in the best light (after-hours messages, be gone!). The problem is that this has unnecessarily complicated recruiters’ daily workflows.

At LinkedIn, we crunched the numbers to find the absolute best time to send an InMail and we discovered: There is no best time. Any time of day gets fairly the same response rate because no matter when they receive the message, candidates respond only when it’s convenient for them.

However,  what really drives response rates is length and personalization. The shorter and more personalized the InMail, the higher the response rate.

Let’s dive into the details.

Send InMails whenever it works best for you: there is no magical hour or day of the week

We looked at InMails data from recruiters and prospects in San Francisco, hoping to find that elusive best time to send InMails.

What we found was that far fewer InMails are sent during non-business hours; aka nights and weekends. However, the response rate to those InMails was essentially the same as InMails sent during regular business hours.

Most InMails are sent between 8 a.m. and 6 p.m. (see blue bars in the graph) but the daily response rate (represented by the blue dotted line) remains fairly close to the average overall response rate. 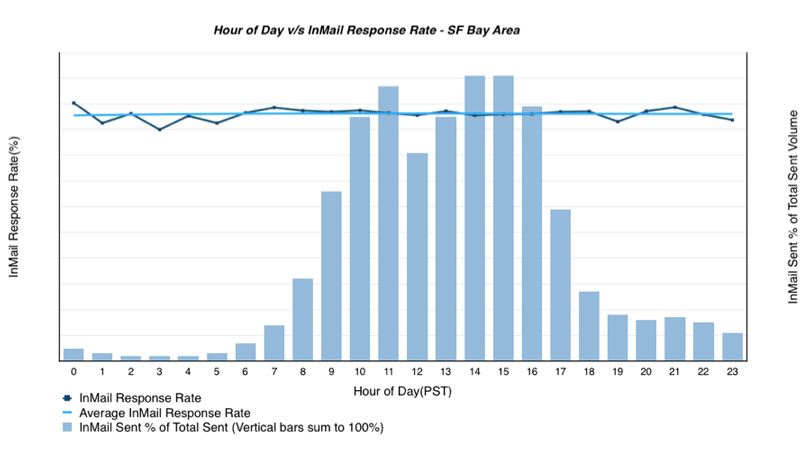 Same goes for the day of the week.

The graph you can see that most InMails in the San Francisco Bay Area are sent between Monday and Friday (see the blue bars). However, the response rate (again represented by the blue dotted line) to InMails is around the average. What we found here for San Francisco was also consistent globally! 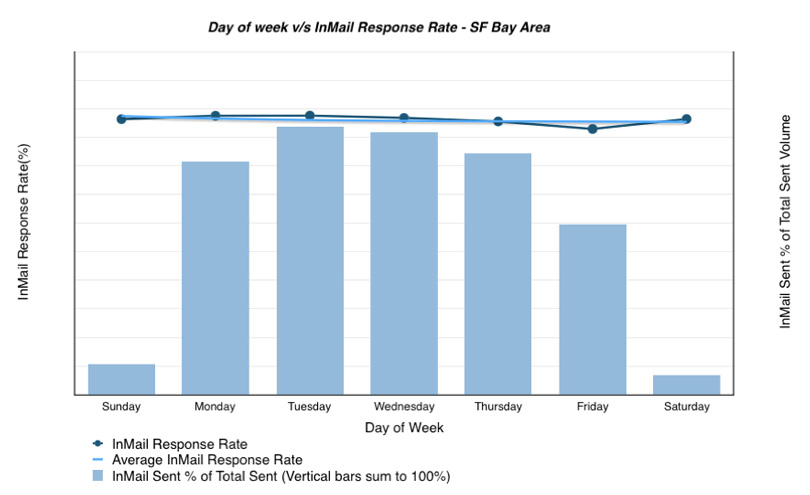 We analyzed the numbers to see how length affects the response rate of an InMail. Specifically, we looked at each InMail sent in February of 2016, comparing its body word count to the response rate.

What this all means to you

The takeaway here is straightforward: It doesn’t matter when you send an InMail, so don’t spend time worrying about that. Instead, worry about the length of your message. The key is being as concise and tailored as possible, as that will increase your chance of getting a response and getting a hire faster.