Editor’s Note: In the Astonishing Tales of Content Marketing series, we reflect back on the marketing pioneers who paved the way for modern content marketing. Last time, we went back to the early 2000’s with Blendtec. This time, we’ll explore how Jell-O dominated the home cooking scene in the first half of the 20th century.

The Jell-O brand took an unlikely journey from animal by-product to omni-present side dish. The little packets of powder that became wobbly desserts (and occasionally main courses) dominated American cuisine in the first half of the 20th century.

Today, families are still finding room for Jell-O. The brand embraced social media, with nearly a million followers on Facebook and a recipe-sharing homepage that encourages user participation. Not bad for a brand once considered so worthless by an owner that he nearly sold it for $35.

Read on to learn how Jell-O used truly astonishing content marketing to win the hearts and minds of America’s housewives.

In the 18th and 19th century, gelatin desserts were considered a luxury. The time and effort it took to boil and strain the gelatin meant only households with a full kitchen staff could offer it to guests.

In 1845, an inventor named Peter Cooper patented a way to mass produce powdered gelatin. He sold the powder to restaurants and professional chefs, but had little interest in marketing it further. Years later, failed cough syrup manufacturers Pearl and May Wait bought the patent. They revolutionized the product by adding flavored syrup to the usually bland dish.

The resulting product was named “Jell-O,” a combination of the words “jelly” and “gelatin.” But Pearl and May lacked the marketing knowhow to capitalize on their invention, and in 1899 sold the brand to the Genesee Food Company for the princely sum of $450.

Genesee’s owner, the excellently named Orator Woodward, started with a direct sales approach for the brand, with salesmen offering samples to grocers and even going door-to-door. But sales stayed flat, and Orator tried (unsuccessfully) to unload the brand for as little as $35.

1904: A Marketing Juggernaut Is Born

The Ladies Home Journal ads took sales through the roof. A second round of ads featured pantries stocked with Jell-O and adorable tykes digging into their favorite dessert, each one a hand-illustrated work of art.

Once Jell-O really hit its wiggly stride, Woodward and Co. kept the momentum going with innovative marketing. They handed out Jell-O molds at Ellis Island to newly-arriving immigrants. They introduced the Jell-O girl, who appeared in ads holding a packet of Jell-O and a tea kettle, telling mothers, “You can’t be a kid without it.”

Most importantly, Woodward and company began printing recipe books to illuminate the hundreds of creative ways homemakers could use Jell-O in virtually every course of their dinner.

In 1924, the Genesee Food Company became the Jell-O Company, and their marketing efforts continued to expand. The company hired an up-and-coming artist named Norman Rockwell to illustrate their ads. 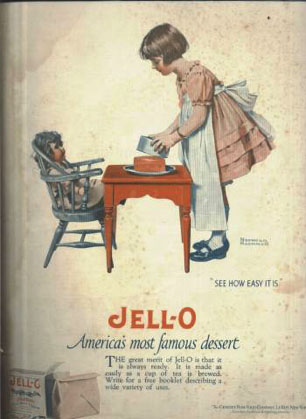 Jell-O was an early adopter of radio advertising in 1934, sponsoring the Jell-O Program with Jack Benny.   Jell-O cookbooks of the time capitalized on a trend for savory gelatin salads. For example, this Chicken Mousse Recipe calls for lemon Jell-O, chicken, pimento, vinegar, and whipped cream. Delicious!

Like Betty Crocker, Jell-O was front and center with great content for rationing-restricted housewives. Between 1942 and 1945, they released the “Bright Spots for Wartime Meals” recipe books, designed to help women make the most of limited resources—by using plenty of Jell-O, of course.

Jell-O released a definitive cookbook in 1961 called the Joys of Jell-O, featuring over 250 recipes. The book’s savory section relied heavily on Jell-O’s new savory flavors, celery, Italian, and tomato (which have since, sadly, been discontinued).

In the late 70s and 80s, sales of Jell-O began to slip. The trend of congealed salads with floating vegetables gave way to a health-food trend for fresh, tossed salad. Jell-O dug deep into their old cookbooks to find a way to reverse the decline.

Fortunately, instead of bringing back the chicken mousse, they rediscovered a recipe for thicker, more concentrated Jell-O kids could cut into shapes and eat with their hands. Even better (for the company), the recipe called for twice the Jell-O per serving. Dubbed Jell-O Jigglers and promoted with recipes on Jell-O boxes, magazine ads, and TV spots, the creation boosted Jell-O sales 47%.

Today, Jell-O may not be “America’s favorite dessert,” but it’s still in high demand. Jell-O continues to repurpose old recipes and create new ones. They also feature user-generated recipes on Instagram and maintain an active Facebook presence with nearly a million followers.

Jell-O turned a packet of boiled cow hooves, sugar, and flavoring into a must-have dessert for over a century. Along the way, they shaped how generations of Americans prepared and presented their meals. That’s a truly astonishing tale of content marketing.