There are many challenges associated with finding just the right target audience for your ad campaigns. You may have trouble delivering ads on a consistent basis, engaging new prospects, or you may have hit a “reach ceiling” and maxed out impressions that you’re eligible to serve to your target audience.

If you’ve ever experienced any of these challenges, then Audience Expansion can help.

What is Audience Expansion? With a single click in Campaign Manager, Audience Expansion lets you expand your LinkedIn campaign targeting to include even more qualified prospects who might not be on your radar -- but who might still be the kinds of professionals who can drive meaningful engagement with your brand and business on LinkedIn.

Next, our new Audience Expansion model also builds the lookalike audience based on members’ engagement history on the LinkedIn platform, such as which company content they interact with on LinkedIn. This means that when you leverage Audience Expansion on a campaign, our algorithm will expand your reach to more similar professionals who are most likely to take action with your content.

Here’s how you can use the new Audience Expansion model to improve your campaign performance and delivery:

In summary, Audience Expansion can help advertisers discover new quality prospects and automatically drive more of them into your marketing funnel.  We’ve seen strong results from Audience Expansion so far: opt-in campaigns on average are receiving a lift in reach in the high double digits, as measured by unique members and impressions. If you haven’t already, we highly recommend that you give it a try to help you scale your campaigns and discover new audiences. To add it to a new or existing campaign, be sure to enable Audience Expansion when selecting or editing your targeting screen: 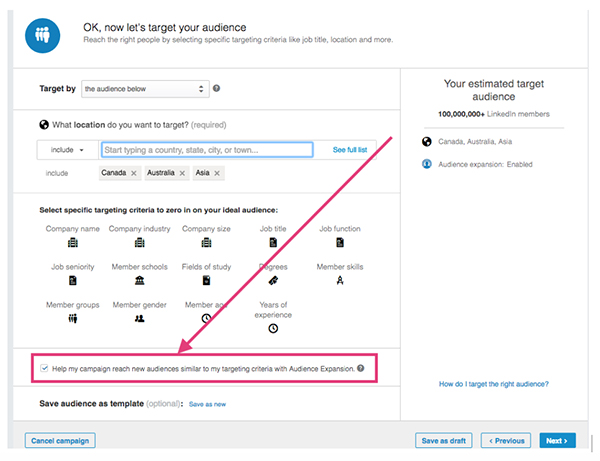 You can also “Laser Focus: 10 Ways to Optimize Your LinkedIn Sponsored Content” now to see how top-performing brands are finding new audiences and driving better-than-ever results.