These are some of the key conclusions from a survey of more than 1,000 bloggers by Orbit Media Studios. In a blog post, Andy Crestodina, an Orbit Media co-founder, outlined some of the implications of his company’s third annual survey and concluded that bloggers were focusing on quality over quantity.

Read on to find out how bloggers are changing their approach and why reducing frequency may pose hidden problems for your blog and overall content marketing.

The average blog post, according to Orbit Media’s survey, takes three hours and 16 minutes to write — an increase of 26 percent over the 2015 survey. Additionally, the survey found that twice as many bloggers are taking more than six hours to create the average post.

Blog posts are getting longer. The survey found that the average blog post is 1,050 words long. That’s up 19 percent over last year. At the same time, posts that are 500 words or fewer are half as common as they were in 2014. In the same vein, the percentage of super-long posts of 2,000 words or more have doubled, just as they did last year. 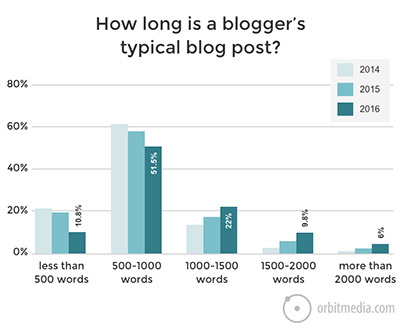 The backlash against high frequency in blogging continues, according to Orbit Media’s survey. Daily blogging has plunged in the past year, dropping 53 percent. Weekly is the more common frequency for blogging, and the percentage of bloggers who publish monthly has increased 38 percent in the past year. 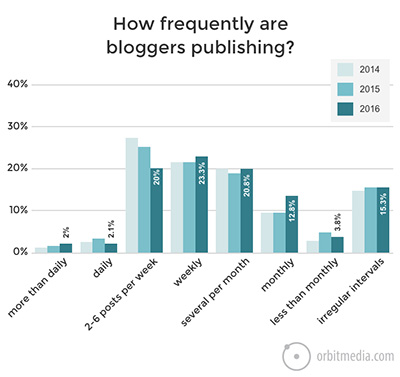 “Quality is winning as the more popular strategy (over quantity),” Crestodina writes. But he finds that the data doesn’t show that less frequent posts deliver better results. In fact, bloggers who post daily or more than daily reported the strongest results in Orbit Media’s survey.

Crestodina speculated on the reason. “Probably, bloggers with higher-frequency content programs are doing other things well, including distribution, promotion and measurement,” he said.