When you think B2B video, you of course think CGI.

The absurdity of that statement could be considered a blessing for B2B marketers. If we were to jazz up our video content with Hollywood-level special effects, our buyers might be momentarily dazzled but it probably wouldn’t be long before fiscal responsibility concerns set in. We sell solutions to business problems, not blockbusters.

That’s not to say brands aren’t producing awe inspiring B2B video content, or that you can’t create thoroughly enjoyed and highly shared videos on a shoestring budget. Today, anyone can create professional looking videos, even in Kevin McCallister mode (home alone). We’ll show you how below. But first, let’s briefly cover why marketers should shoot video in the first place.

Occupying space on marketing trends lists since it was a thing, video may now seem too ubiquitous to be considered a trend, particularly an emerging one, but can a tactic technically exit trend status when usage and effectiveness are still on the rise?

If the full extent of your video-producing equipment is presently being used to read this post, that’s okay. Keynote speaker and bestselling author Andrew Davis advises marketers to “shoot with what you’ve got.”

“Don’t go out and buy a bunch of fancy gear to get started; do it today, with the equipment you have,” advises Andrew. “If you have an iPhone, shoot on your iPhone. Whatever you have in your pocket is the first thing you should start to shoot with, because the truth is, the gear can get in the way. There’s a large and long learning curve for a lot of this stuff, and instead of trying to figure that all out, you just need to start shooting some video.”

Are concerns about quality holding you back from pressing record? Does the thought of filming from home only intensify your concerns? If so, here are nine more tips to help you create professional videos from home, or anywhere.

One good view. That’s all you need. The rest of your surroundings could resemble a disaster zone. Doesn’t matter. As long as what’s in the shot is well-lit with a clean-ish and not-too distracting backdrop, your “place” will look great.

You can go back to being like the kid who cleans their room faster than you can say “ice cream” by stuffing everything into the closet and under the bed. Maybe just don’t broadcast live when a parent might swing by.

We’ve all seen professional photographers and videographers use various lighting fixtures, meters, umbrellas, and other gadgets to get the lighting just right. All that fine-tuning ... it appears to be highly technical, and let’s face it, a little intimidating if you haven’t done it.

Professional video lights, like an LED light, can give you that soft, natural glow, no matter where you shoot in your home. For more on this, Wistia published an informative makeshift lighting primer.

If you don’t have access to professional lighting equipment and don’t want to buy it, the sun remains free. Just pick a spot where you’re facing a window and plan to shoot when there’s an optimal amount of light shining through.

For hard-to-get-rid-of glares, try draping a light sheet or two over the window. If you prefer to be more certain about your lighting conditions, consider a light metering app. You can find several for under $25.

If you’d prefer not to bother with a light meter, also know that your eyeballs are perfectly acceptable tools for evaluating lighting quality. Just play around until your space is lit to your liking. If the shot comes off as clear and comprehensible to you, it’ll most likely look good to your audience. If you’re still not sure, consider asking a trusted colleague for their opinion.

Again here, professional equipment can boost sound quality, but it’s not a prerequisite. You can capture quality audio without a microphone.

The key is to make sure your microphone is close enough to the subject. If you have access to a second smartphone – or can convince a housemate to part with theirs for a bit – consider dangling the second phone directly above the subject (and outside the frame of course) and recording sound via the voice memo function.

When you create the final cut, use the voice memo audio instead of the audio from your video. Clap once when you start recording to make it super easy to sync the higher quality sound from your voice memo.

Also, beware of humming and buzzing in the background. We get accustomed to certain noises at home, like those coming from our washing machines and air conditioning units. We might not notice them when we’re shooting, but others might.

These subtle sounds drown out your audio. They may also annoy some of those listening at a higher volume or with headphones, so make sure all your noisemakers are turned off beforehand. If it’s a scorcher and you’ll be shooting for more than a few minutes, try keeping your most powerful fan nearby. Whenever the flop sweat starts to appear, take a “full blast” break.

While there seems to be a general trend toward more vertically-oriented video, a good case can be made for all three aspect ratios. It really depends on what you’re trying to convey and how your audience will be viewing the video. Most social networks are compatible with all three orientations.

To determine which option is best for you, turn to your analytics. If most people are viewing your videos from a desktop device, you might consider horizontal. If your audience is more likely to view your videos from their mobile device, you might consider going with a square or vertical orientation. Device shouldn’t be the only driver of this decision, though. You’ll want to weigh effectiveness metrics as well.

In exploring whether it’s best to use horizontal or vertical video on LinkedIn, blogger Julian Mather recommends that marketers “shoot horizontally and keep the important content contained with a square section of your frame so you can have the three options shown below.” 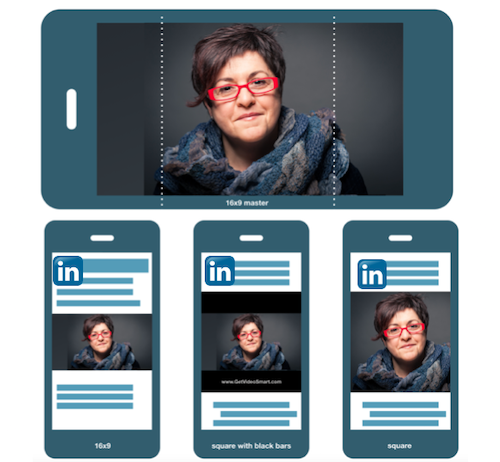 On most social media channels, including LinkedIn, the default is for videos to autoplay without sound. Some people will click to turn on the sound, but it’s best to assume they won’t.

By using subtitles, you allow your audience to experience the audio portion without the sound, making it much easier to not just capture attention, but more importantly hold it during a silent viewing.

Ultimately, many of those closely following your subtitles will turn on the sound or expand to full-screen, but when it comes to social media video, more often than not, it’s those initial words on screen that determine whether someone engages further. Here’s how to add closed captions to videos on LinkedIn.

Set Aside Time for Pre-Production

This tip also comes courtesy of Mr. Davis, who cautions that, “as soon as you hit record, everything intelligent you are about to say leaves your head.”

To sidestep this dilemma, Andrew recommends using notecards for everything you shoot. “I write down the answers to questions, or the plan I have for the video, and then I ensure that I use my notecards to get through the video.”

Notecards are especially helpful for staying on-script without coming off as too robotic.

Refine Your Story with Editing

Smartphone video editing keeps improving, and the editing tools that come standard with the video apps on your phone can work just fine for those casual videos where polish isn’t expected and doesn’t add much to the user experience.

But if you’re spending more than a few minutes editing, you’ll probably want to edit on your desktop. There are literally dozens of video editing software programs to choose from, many of which you can use or trial at no cost.

These same programs can make it easy to overlay visual storytelling elements like graphics, people, and text, all of which can extend viewers’ attention.

When both planning and editing your video, ask yourself if you’re giving your audience members enough within the first ten seconds to entice them to watch the rest of the video.

With the scrolling nature of social media, a few seconds is typically all you have to convince someone to stop and stay a while. For the same reason it’s wise to focus the bulk of your attention on the headline and opening paragraph when writing a blog post, it’s a good idea to heavily scrutinize the first ten seconds of your videos – viewer attention drops after that point.

There’s no rule against longer videos. They can work just fine depending on your objective. Generally though, people prefer shorter videos: An internal 2018 study by LinkedIn found that videos under 30 seconds reported a 200% lift in view completion rates.

If you’ve edited until you can edit no more, and your video still feels too long, think about how you might parse the video into bite-sized segments.

Time to Get Rolling

For more ways to look good in front of your audience, on camera or off, subscribe to the LinkedIn Marketing Blog.