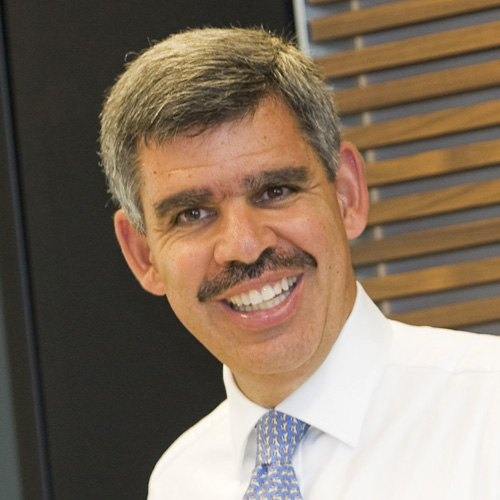 Dr. Mohamed A. El-Erian is CEO and co-CIO of PIMCO, the global investment management firm with around $2 trillion of assets under management. He re-joined PIMCO at the end of 2007 after serving for two years as President and CEO of Harvard Management Company, the entity that manages Harvard’s endowment and related accounts.

He first joined PIMCO in 1999 and was a senior member of PIMCO's portfolio management and investment strategy group. Before coming to PIMCO, Dr. El-Erian was a managing director at Salomon Smith Barney/Citigroup in London and before that, he spent 15 years at the International Monetary Fund in Washington, D.C.

Dr. El-Erian has published widely on international economic and finance topics. In addition to regular op eds in a number of publications, he is a member of the Financial Times “A List” and a contributing editor for Foreign Policy. His 2008 book, "When Markets Collide," was a New York Times and Wall Street Journal bestseller, won the Financial Times/Goldman Sachs Business Book of the Year and was named a book of the year by The Economist and one of the best business books of all time by The Independent (UK). He was named to Foreign Policy’s list of “Top 100 Global Thinkers” for 2009, 2010, 2011 and 2012.

Dr. El-Erian has served on several boards and committees, including the U.S. Treasury Borrowing Advisory Committee, the International Center for Research on Women, the Peterson Institute for International Economics and the IMF's Committee of Eminent Persons. In December 2012, he was appointed Chair of the President’s Global Development Council.  He is currently a board member of the NBER, the Carnegie Endowment for International Peace, and Cambridge in America. He holds a master's degree and doctorate in economics from Oxford University and received his undergraduate degree from Cambridge University.