Pat Wadors was a nine-year old tomboy who followed her brother to Little League tryouts. She made the team but when the coaches found out she was a girl, they said she couldn’t play.

“Like most people who feel like they don’t belong, I accepted it and walked away,” recalls Pat. “But my sisters argued on my behalf until the manager checked the rulebook and said that I could.”

Pat became the only female on an all-male team. Diversity? Check. Her coaches were fair and honest. Inclusion? Check.

But Pat’s teammates stole her mitt and taunted her. They made her feel bad for being a girl. Despite being included, Pat didn’t feel like she belonged.

Fast forward to today. Pat is now LinkedIn’s head of HR. She’s on a mission to bring ‘belonging’ into the the diversity conversation. Here’s why:

We all know that having employees with unique ideas and experiences drives innovation and profitability. Diverse workforces are more engaged and that’s a real competitive advantage for companies.

“But we’re still not moving the needle enough,” says Pat. She argues that diversity and inclusion are necessary but not sufficient for employee engagement -- belonging is the missing part of the equation. 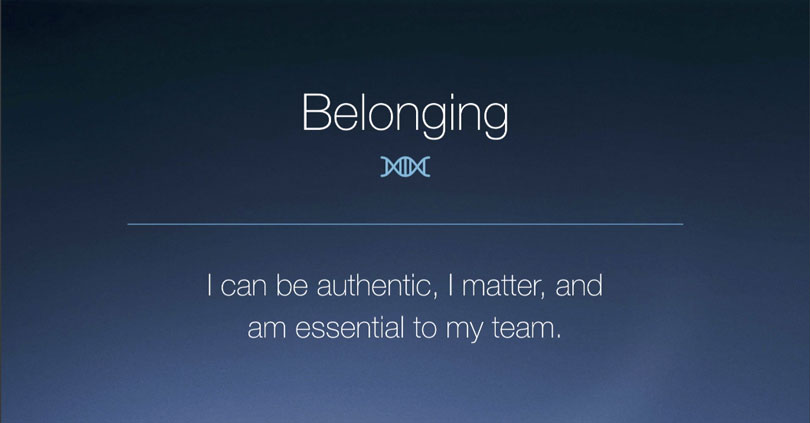 Only when we feel psychologically safe can we unleash our best selves, she says. When we’re part of a team that values our opinion, we speak up and contribute more. Alternatively, when we don’t feel like we belong, we lose productivity because we waste time worrying about it. (Minorities spend 25-30% of their time worrying about how they fit in.)

How to cultivate a culture of belonging

Pat reminds us, paraphrasing Maya Angelou, that candidates and employees will forget what we said and what we did, but they won’t forget how we made them feel. Here are five ways to help your employees feel a sense of belonging to your organization.

Fluffy as it sounds, as recruiters you are gatekeepers to your organization so you set the tone with candidates. When candidates don’t see themselves in your marketing materials, they won’t feel understood. When you say you’ll call them back and you don’t, they won’t feel like they fit in.

Challenge yourself to listen better during interviews. That means not speaking over candidates, putting away your devices, and asking thoughtful follow-up questions that demonstrate you’ve heard them. Remember, candidates don't want to be just a number or part of a process - they want to be on a team where people know their story and what they’re good at. Make sure you allow them to convey their best selves by being a good listener.

Stories draw people into worlds other than their own which leads to understanding and empathy. That’s why LinkedIn has challenged employees to tell their belonging moments. “These beautiful, awkward, amazing conversations are now happening organically in the hallways,” says Pat. From the marketer in an interracial marriage to the Muslim developer, employees are hiding their personal circumstances less and engaging with others more as a result.

“You may not know what it's like to be gay or Latino, but you probably have friends or family who do,” says Pat. “When we listen and celebrate what is both common and different, we become a wiser, more inclusive, and better organization.”

LinkedIn hosted a town hall for employees to share knowledge and stories which were poignant, moving, and ultimately increased the sense of belonging at LinkedIn. Pat firmly believes these types of conversations should take place at work because the issues directly impact who joins the company and how engaged they are.

Whether it’s deciding whom to interview, whom to hire, what compensation to give, or when to promote, unconscious bias can creep in at any stage.

To break the bias, LinkedIn is training employees at these decision points so that they can evaluate their assumptions in a safe environment and learn to adjust their behavior accordingly.

Initial research showed that two of the biggest drivers of employee engagement were belonging-related: “I make a big effort to help others feel like they belong at LinkedIn,” and “Even when something negative happens I feel like I belong at LinkedIn.”   The company will continue to monitor this feedback against its belonging initiatives to measure their impact.

Looks don’t change the value of an employee’s input. Everyone deserves to be treated beautifully, and this belonging mindset is how to do just that. So bring it to your organization.  Start by sharing a belonging moment of your own or by listening to someone else’s. #belonging

p.s. Halfway through Pat’s first Little League season, she made a big play and her teammates invited her to pizza (and returned her mitt.) “It was the first belonging moment of my life,” she recalls. “I’ll never forget that beautiful feeling.” Pat went on to play Little League for two more years.

For more from Pat, check out Talent on Tap, a weekly series where Pat and Brendan Browne, Head of Talent and LinkedIn, break down some of the hottest topics, biggest challenges, and most enticing opportunities in the world of talent.