The last month or so has been a tough one for women in the workplace.

There was the tone-deaf comment from Akbar Al Baker, who said that his role as CEO of Qatar Airways had to be filled by a man “because it is a very challenging position.”

More substantively, it was announced that the number of women CEOs at Fortune 500 companies dropped 25% in the last year (from 32 to 24). And Britain released details from its Hampton-Alexander Review, which examines the lack of women on corporate boards. The report was laced with pitiful explanations for the dismal numbers, including, “All the ‘good’ women have already been snapped up,” “We have one woman already on the board,” and “Most women don’t want the hassle or pressure of sitting on a board.”

This rash of bad news isn't good for women or business. Study after study show that the more gender-balanced a business is, the better it’s likely to perform. Yet, women account for only 20% of the C-suite roles in the United States, even though they make up 47% of the workforce, according to the Women in the Workplace 2017 report issued by Sheryl Sandberg’s LeanIn.org. That same report noted the percentage of women drops off with each move up the corporate ladder. 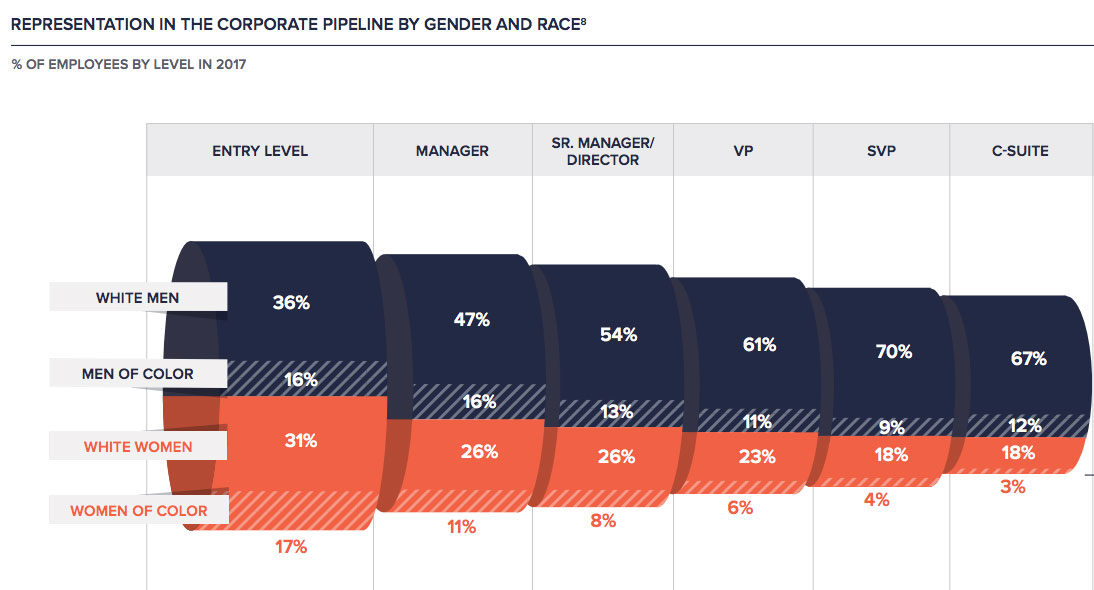 The good news is that more and more companies are pushing for female leadership. A Scout Exchange survey of 1,200 U.S. recruiters earlier this year showed that 80% of recruiters said they had noted an increase in the requests for women executives during the previous 12 months. So to help any company recruit more women leaders, we've put together five tactics that can help you reach that goal:

A number of companies have now implemented a version of the National Football League’s Rooney Rule, which requires any team hiring a head coach to interview at least one minority candidate.

In its beefed-up adaptation of the Rooney Rule, Greenhouse, a bicoastal firm that specializes in talent acquisition software, created a requirement that half of the final candidates for any executive position have to be women. And in the last two years, the executive team has gone from 25% women to 40%.

Similarly, Pinterest implemented a requirement that every open leadership position have at least one minority and one female candidate. Facebook and Slack have also used modified Rooney Rules to improve their diversity.

After the Harvey Weinstein scandal broke last October, the Boston-based tech firm 121nexus looked at its all-male board and executive team and decided that the company needed to change its makeup.

Initially, 121nexus had a hard time getting traction, according to CEO Charlie Kim. “It truly looked like the same candidates were coming in the door,” Kim told the Boston Globe. “They were just putting on a mustache and changing their name.” But Kim kept insisting on a mix that included more women—and he got it.

You’ve heard the old axiom that encourages people to “fish where the fish are.” So when you’re looking to boost the mix of women on your company’s executive team, tap into the places that already nurture high-performing women, such as women’s colleges and professional organizations.

Sociologists from Harvard and Tel Aviv University conducted a study of 829 midsize and large U.S. companies to determine which diversity efforts paid off. Their research showed that companies that conducted targeted recruitment at women’s colleges increased their number of women managers by 10% over a five-year span—and the effect held for white, black, Hispanic, and Asian American women.

Referrals have often been hailed as the best source for quality hires. But a report from PayScale earlier this year shows that job referrals tend to benefit white men more than women or people of color. That doesn’t have to be the outcome.

Pinterest, for example, wanted to get more referrals for women and underrepresented minorities. So that’s exactly what the company asked for from its employees. Pinterest challenged its engineering team to deliver twice as many female candidates as normal over a six-week test period and 10 times as many candidates from underrepresented ethnic backgrounds.

Other companies have decided they could do better than just ask by changing the incentives they offer for referrals. In 2015, Intel announced it was aiming to increase the number of women and minority employees by at least 14% by 2020. The company also disclosed that it would reward employees who referred a successful woman, minority, or veteran candidate with a $4,000 bonus—twice the company’s standard referral bonus.

Intel saw immediate results. In the first quarter of 2015, 33% of the executives the company hired were women, up from 19% the previous year.

4. Create programs to train and retain women who are returning to the workforce

There’s an enormous pool of women with the education, talent, and ambition to help any company—and yet this group remains largely untapped. According to a 2013 estimate by iRelaunch, a firm that helps women return to the workforce, there are 2.2 million college-educated women in the United States looking to do just that.

Those women may have stepped out to start a family, to care for elderly parents, or to attend to personal issues. Most of these women find re-entering the workplace anything but smooth sailing.

Hiring managers “assume their skills are out-of-date, or they’ll be unable to adapt to new environments, or they can’t fully commit to the job and its hours,” writes Addie Swartz, the founder of reacHIRE, a company that gives Fortune 500 companies access to women looking to re-enter the corporate world. Swartz adds: “We ought to be investing in these women, providing them with the right training and retooling to cultivate a rare and coveted diversity at the highest levels of leadership.”

Goldman Sachs saw this opportunity and in 2008 launched its Returnship program, targeting women professionals who want to return to the workforce after voluntarily taking a break for two or more years. In Goldman’s 10-week program, women learn about the latest technology developments that are impacting the financial world and they are brought up-to-speed on regulatory and compliance issues affecting investment banks.

According to the Wall Street Journal, about half of the participants in the program have moved on to full-time jobs with Goldman. The program started in the U.S. but Goldman has since expanded it globally. Goldman’s success has prompted similar efforts at J.P. Morgan and Morgan Stanley.

5. Recruit from the inside: Develop and nurture the talent you already have

Your best single source of future women leaders may be your own company, which should be making sure that women, like men, have access to mentors and sponsors.

“Organizations need to make sure managers have the know-how to support women’s career development,” a Women in the Workplace report advises. “They can also invest in formal mentorship and sponsorship programs to provide additional guidance.”

In a Harvard Business Review survey of 57 women CEOs last year, the authors noted: “The recognition by a boss or mentor was key to sparking long-term ambition in many of the women.” The story also recommended: “Organizations should intervene to identify and develop promising future talent early in their careers.”

So start your efforts to put more women in leadership positions by recruiting the women who are already flourishing at your company. These women have more experience with your company’s culture and leadership style and will also help you bring in more female talent.

LinkedIn teamed with Egon Zehnder last year to conduct the Leaders & Daughters Global Survey—7,000 women in seven countries on five continents—to gauge women’s leadership aspirations. We found that 74% of women, early in their careers, aim to become executives. The idea that women don’t aspire to leadership is persistent despite the hard evidence to the contrary.

The good news is it's clear that women often make great leaders, outperforming men in most leadership dimensions. Plus, companies with higher female representation in their top tiers outperform others by delivering 34% greater return to shareholders.

And lastly, despite the notion of at least one executive in the United Kingdom, all the “good” women haven’t been snapped up – not by a long shot. Every company can use the tactics listed to shift the gender balance and, in doing so, become more successful.