There’s no doubt that progress is being made in terms of leveling the playing field for men and women in the workplace. In fact, 74% of women early in their careers have every intention of reaching the executive level.

But, getting there isn’t simple. You likely won’t be surprised that these same women are less likely to be considered for a role than a male candidate with the exact same experience and qualifications. And when they are hired, women often find it more difficult to climb to senior positions within a company.

To gain a deeper understanding of the aspirations of women in the workforce as well as the roadblocks they face, Egon Zehnder teamed up with LinkedIn to conduct the Leaders & Daughters Global Survey. The study gauged the leadership aspirations of over 7,000 working women across seven countries. The findings reveal global trends in attitudes towards female leadership that every company should be aware of. Here are five of the most significant insights we took away:

1. Women aspire for executive leadership during the early stages of their career, but these aspirations drop sharply as they become more senior

The glass ceiling exists, but women are pushing against it--particularly those just starting out in their careers. As mentioned, 74% of women globally in junior or middle manager level positions expressed aspirations of reaching senior or executive leadership ranks within their organization. And, they wanted the CEO spot more than any other position.

This ambition prevails in spite of countless obstacles in their place--like the fact that women experience more pushback than men when negotiating for promotions. 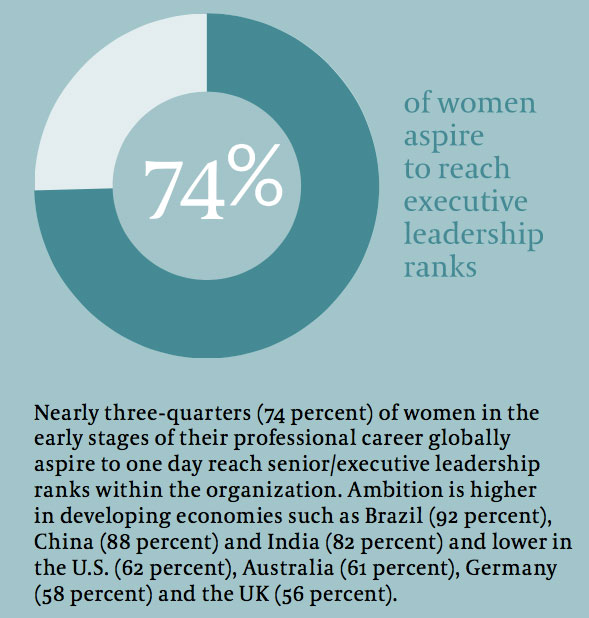 2. Women in senior leadership roles feel they have the hardest time getting promoted

Almost half (49%) of women surveyed expressed the belief that it is more challenging for them to reach senior management positions than it is for men in their organization. And this was even more prevalent in women who had already risen to middle management levels and above, with more than 60% feeling they would struggle more than their male counterparts in getting a promotion. Women at C-suite level also identified gender bias in the workplace as an issue that affected them—particularly in India and the United States.

The main challenge that women felt impeded their advancement was the opportunity to broaden their skillset. Nearly a third (32%) of respondents said this was an issue for them. A further 29% said that, despite having the abilities and potential required for advancement, they didn’t have the right opportunities to showcase them. The difficulty of balancing work and home lives was also a big issue--27% of women surveyed felt this strain, with women aged 36-40 struggling the most. 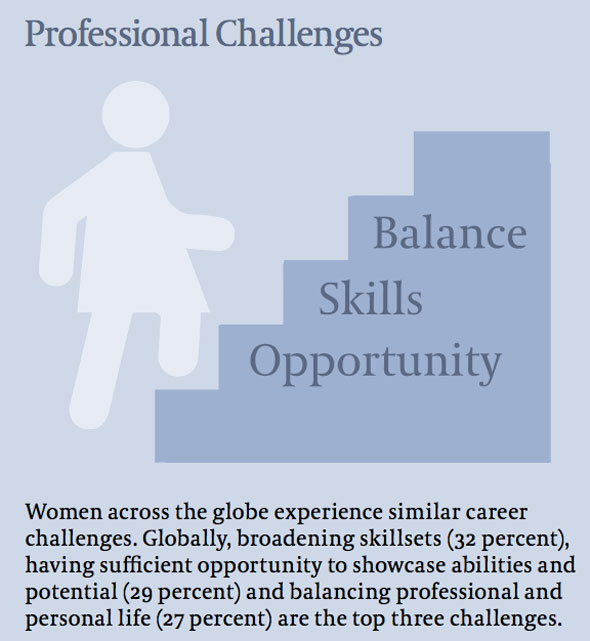 3. A competitive salary has a bigger influence on career decisions than job growth

Women earn less than men, and competitive salary matters a lot to them. In fact, 57% of respondents across every country ranked this as their biggest motivator when looking for a new job. Also important was a flexible work schedule and hours and good health benefits. The results were slightly different for American women, who said overall that flexibility was most important to them. 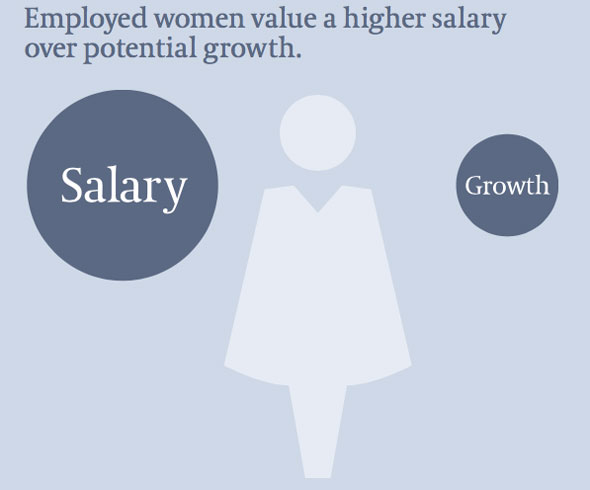 But salary was such an important consideration that nearly half (46%) of global respondents felt more inclined to accept a job with undefined growth opportunities but a higher starting salary. Just 38% felt the reverse was true.

Globally, women credited their parents as the greatest influence on their careers. But this varied significantly with age, with older women claiming that there was no biggest influence for them.

Interestingly, China was the only country to rank a professional influence in their top five, reporting that peers and co-workers played the fifth most significant role.

Revealingly, husbands and fathers ranked globally as two of the three top influencers. This shines a light on the importance of positive male support throughout women’s lives in shaping their career ambitions and success.

5. It’s harder for older women to find an advocate in the workplace (but it’s easier if they are more senior in rank)

Globally, only 56% of junior level women reported having a senior leader who acts as an advocate on their behalf. This is telling when considered alongside a report from the Harvard Business Review that argues men find it easier to find advocacy simply because there are more men in the C-suite. After all, people have a tendency to gravitate towards those most like themselves.

While advocacy rises with rank (with 71% of women in C-suite positions reporting it), it also declines with age. This makes it harder for women to gain access to the support they need if they don’t reach a senior position within a certain time frame, increasing the pressure on younger women to succeed. 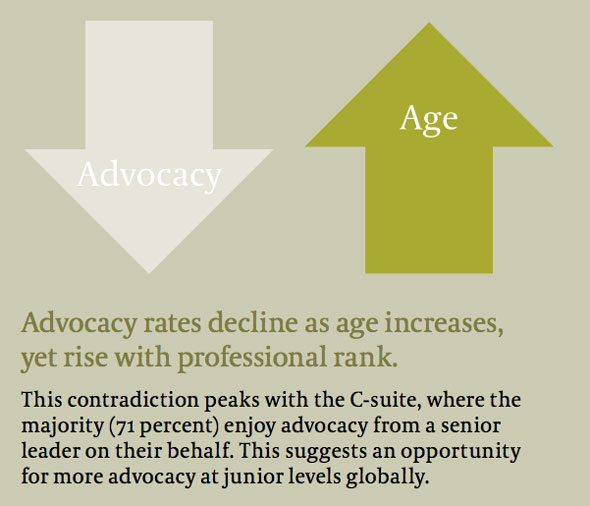 Of all women surveyed, only slightly more than half (54%) felt they have access to mentorship from senior leaders. However, this number was significantly higher in Brazil, China, and India.

What this means for you

There is still plenty of work to be done in order for us to start seeing an equal ratio of women to men in leadership positions. The good news is, there’s a lot you can start doing now to make this possible.

For starters, companies can focus on removing bias from the hiring equation. Here are some ideas, including removing names and personal information from resumes and setting strict business targets to ensure diversity. Companies like Airbnb are even putting their employees through unconscious bias training in order to create a more diverse and workforce.

With a competitive salary have such a big influence on women’s career decisions, Pat Wadors, LinkedIn’s Head of HR, believes that increasing the level of transparency and honesty in the salary negotiation process will remove some of the biases women face and provide them with fair compensation. In addition, new equal pay laws in some states make it illegal to ask candidates their current salary in an attempt to level the playing field for women who are paid less than their male counterparts.

Flexibility is also key - especially for mothers - and some companies like Netflix are giving new parents unlimited paid time off the year after they have a child. If you can’t do that (which many companies can’t) simply giving employees the OK to work from home some days and manage their own schedules can make a huge difference.

Lastly, make sure every single female employee has access to a mentor who can advocate for them. Start by assigning new hires with a mentor who is in a leadership position and ideally works in a similar field to the new hire. You can make sure the mentorship lasts by requiring a monthly meeting between the mentor and mentee to touch base on goals and what’s working and what’s not.

This is just a start and companies will need to strive to encourage the next generation of female talent in order to reap the benefits of a diverse workforce.