For the LGBTQ+ community, Pride Month is an opportunity to celebrate being who you are and loving who you love. Celebrated in June in many countries to commemorate the 1969 Stonewall riots in New York City that helped catalyze the LGBTQ+ rights movement, Pride also serves an important reminder that the battle for acceptance and inclusion is far from over.

This is especially true in the workplace, where many LGBTQ+ individuals still face serious barriers to entry and advancement. In the United States, for example, the Supreme Court has yet to decide whether Title VII of the Civil Rights Act — which prevents employment discrimination on the basis of sex, race, color, national origin, or religion — covers sexual orientation and transgender status. And in the United Kingdom, a recent report found that 68% of LGBT employees have experienced harassment at work — with the vast majority not reporting incidents for fear of being publicly outed or damaging their careers.

Specifics such as these highlight the importance of fostering a culture of inclusion and belonging for all employees. And while Pride Month is the perfect time to celebrate diversity and have fun doing it, it’s also an opportunity to think about how you can support your LGBTQ+ workforce in meaningful ways all year long.

So, let your Pride flag fly. Here are five impactful ways that companies celebrate Pride in June — and beyond:

1. Salesforce, IKEA, and others take part in local Pride parades and LGBTQ+ events throughout the year

If you’ve ever attended a Pride parade in a major city, you’ve probably seen plenty of floats and banners sponsored by familiar brands. Participating in local LGBTQ+ events is a powerful way to show employees and prospective candidates that your company is supportive of and welcoming to the community. But it’s important to truly walk the walk — and not just along the parade route.

As more and more companies jump on Pride Month as an advertising opportunity, there are increasing concerns around the commercialization of Pride, and some corporate efforts have come across as hollow. To ensure your presence at local events doesn’t feel like lip service, support your LGBTQ+ community year-round.

Salesforce is a great example of a company that does this. Every year, the company has a massive presence at Pride events around the world, which Salesforce bolsters with an ongoing commitment to LGBTQ+ equality.

Outforce, the company’s employee-led LGBTQ+ affinity group, participated in 27 Pride events last year, with 2,600 employees marching in Pride parades. In 2016, Salesforce Australia voiced its support for marriage equality, and same-sex marriage was legalized there the following year. And Salesforce co-founder Marc Benioff is outspoken in his opposition to anti-LGBTQ+ legislation. 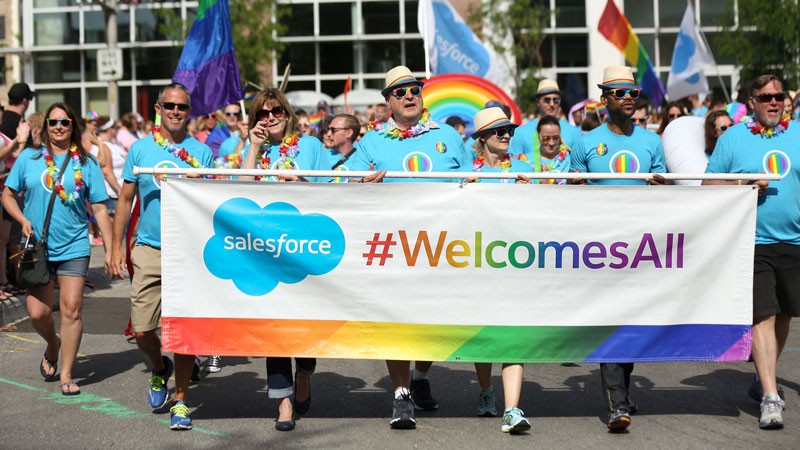 It’s also good to recognize that LGBTQ+ events don’t start and end in June. IKEA, for instance, supports the International Day Against Homophobia, Transphobia, and Biphobia every May by flying the rainbow flag from all its stores in the United Kingdom, Ireland, and Canada. 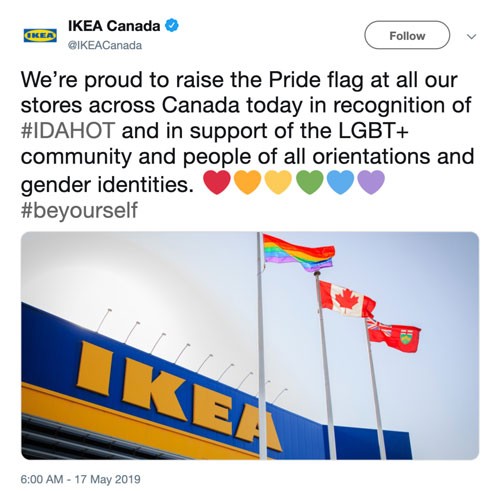 By taking part in events throughout the year, you can reinforce your support for the LGBTQ+ community, letting employees know that you’re on their side. And if you have a company-sponsored volunteering program, consider working with an LGBTQ+ charity to encourage other employees to get involved and learn about the issues. Here’s a list of LGBTQ+ charities you can explore to get started.

2. Ceridian gives LGBTQ+ employees a platform to share their stories with the broader team

Creating and sharing an anti-harassment policy that includes language around LGBTQ+ discrimination is a crucial step toward a more inclusive workplace. But to truly foster a culture where all employees feel they belong and are understood, you need to introduce and encourage some empathy. And one of the best ways to do that is by allowing LGBTQ+ employees to share their stories with their peers.

Ceridian, a provider of payroll and human resources software, uses Pride as an opportunity to build understanding among coworkers. In 2017, the company hosted a global presentation (and ice cream social!) about the ABCs of LGBTQ+ allyship. And in 2018, employees shared their own Pride stories via a webinar, talking about why and how they celebrate and some of the challenges they’ve faced.

“The more people share their story,” writes Nancy Chetaitis, Ceridian’s principal sales education consultant, “the more their colleagues can understand or relate to them, and celebrate with them.” 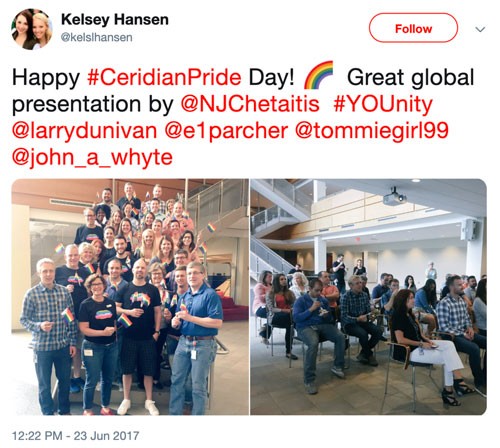 Giving employees a platform to share their stories can help build stronger bonds between coworkers. It can also help employees internalize why anti-harassment policies are so important. If you’ve never experienced a certain kind of discrimination firsthand, it can be hard to grasp how hurtful it is. But hearing how prejudice impacts people you know and respect can make you more willing to speak up when you see something wrong.

3. Uber and Comcast highlight the accomplishments of LGBTQ+ employees in their employer branding

Sharing stories internally is only half of the equation. Building similar messages into your employer branding materials can help show prospective candidates that your company has a welcoming and inclusive culture where they’ll belong.

In 2018, telecommunications giant Comcast kicked off a social media campaign in which they asked their LGBTQ+ employees to share how they #SayPride. For many, the answer was simple: by bringing their authentic selves to work. This, in turn, sent a powerful message to candidates that if they worked at Comcast, they’d never have to hide. 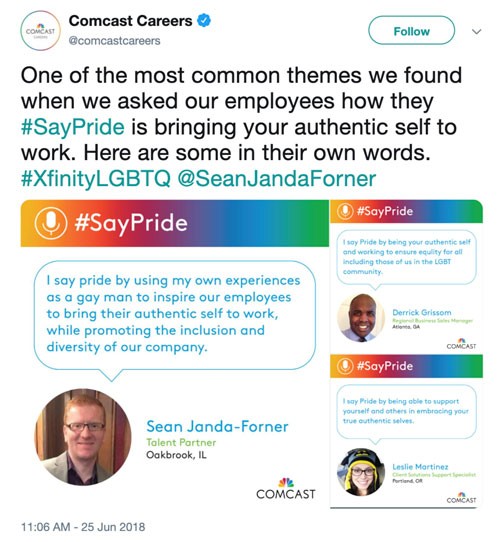 Uber, meanwhile, is shining a spotlight on LGBTQ+ employees on its website, which also features tips for being a good ally and a helpful glossary for gender identity and the different communities that fall under the LGBTQ+ umbrella. 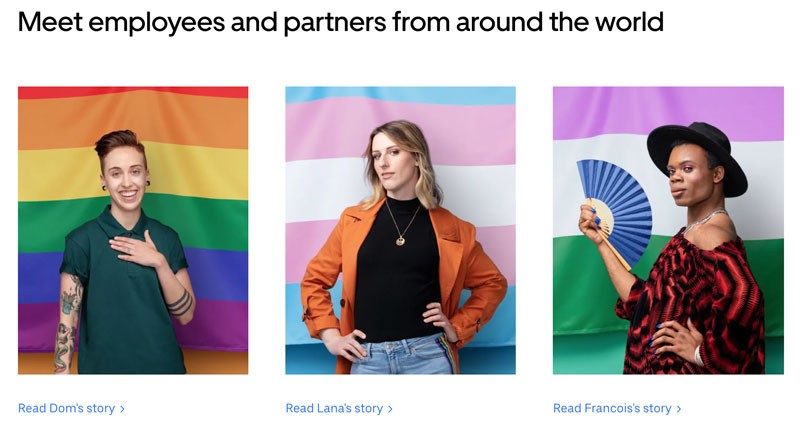 Even if employees are out at work, they may not want to share their stories externally. Always ask before you share details that could make them uncomfortable. If your culture is truly one of belonging, you may be surprised by how many people are excited to spread the word to LGBTQ+ candidates who are on the fence about applying.

Related: 15 Gender Identity Terms You Need to Know to Build an Inclusive Workplace

4. Microsoft finds ways to support its employees even in countries where the law restricts LGBTQ+ activity

If you’re a global organization, the way you celebrate Pride and LGBTQ+ inclusivity may vary significantly from country to country — sometimes out of necessity.

Take Microsoft, which for decades has been at the forefront of the push for LGBTQ+ workplace equality. Microsoft first added sexual orientation to its nondiscrimination policies back in 1989. Four years later, it became one of the first companies in the world to extend employee benefits to same-sex domestic partners. That was also the year Microsoft launched GLEAM, its LGBTQ+ employee resource group.

Today, GLEAM has more than 2,000 members and 46 chapters across 36 countries. Unfortunately, LGBTQ+ rights vary dramatically across those countries. In some, being gay is still illegal.

To combat this, Microsoft works hard to help its employees feel supported wherever and whoever they are. In Singapore, for example, where male homosexuality can result in prison time, many members of the local GLEAM chapter self-identify as allies rather than LGBTQ+. This ensures they can find a community without publicly outing themselves.

“It may be the first time they’ve become involved in their whole life in anything LGBTQ+,” says Mike Emery, co-founder of the Singapore chapter. 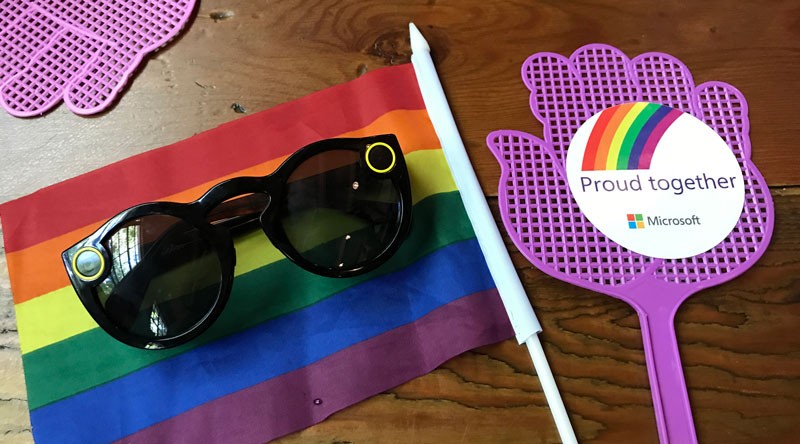 No matter where your company is based, you’ll need to recognize that different employees will have different comfort levels around how they express their identity. Some employees may not be ready to come out, and that’s OK. You can celebrate diversity and respect their personal lives at the same time.

5. Slack has strong LGBTQ+ representation in management, and leaders at EY created a video to share their own experiences

Today, only three Fortune 500 companies — Apple, Dow, and Land O’Lakes — are led by openly LGBTQ+ CEOs. Research shows that these individuals may have a harder time getting to the top, with one recent study finding that “sounding” homosexual can reduce a person’s chances of being considered suitable for a leadership position. This is despite the fact that a 2018 study found companies with LGBTQ+ representation in leadership perform better than those without it.

A lack of visible representation in the C-suite can make it tough for LGBTQ+ employees to see themselves rising through the ranks. To foster a healthy pipeline of diverse employees for leadership roles, you need to make sure that employees from underrepresented groups can envision a future for themselves your company.

Slack is one company that has done a great job smashing the so-called “lavender ceiling” – which is to the LGBTQ+ community what the glass ceiling is to women. The tech company’s 2019 diversity report revealed that 7.8% of its U.S. workforce identifies as LGBTQ — along with 7.8% of its U.S. managers.

This is down slightly from the previous year when the figures were 8.3% and 8.7%, respectively, but it’s still impressive. In the United States, according to research by Gallup, 4.5% of adults identify as lesbian, gay, bisexual, or transgender (though since many people may still be in the closet, the actual number may be higher). 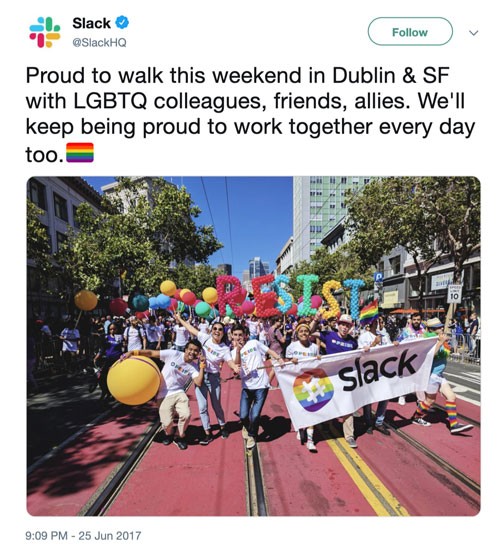 The presence of visible LGBTQ+ leadership can also encourage employees to bring their true selves to work, which can have a major impact on engagement. In fact, LGBTQ+ employees are 85% more likely to be out at companies where senior executives are also out.

Back in 2011, several visibly out professionals at EY participated in the “It Gets Better” video project, a global movement designed to uplift and empower LGBTQ+ youth. One of the speakers was Beth Brooke-Marciniak, EY’s global vice chair of public policy, who took the opportunity to officially come out, talking openly about her own experiences.

“I’ve walked in your shoes,” Beth says in the video. “I’m gay, and I’ve struggled with that for many years. . . . We just need to be part of an organization and a community that embraces and values that difference.” 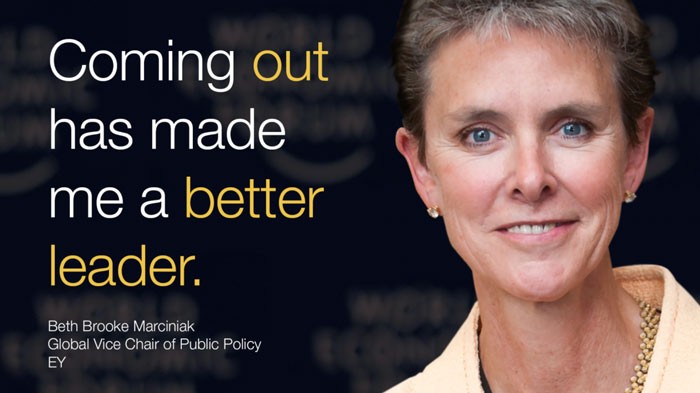 If your organization doesn’t currently have LGBTQ+ leaders, focus on creating allies in high places while you build out your pipeline. Stonewall, a British nonprofit championing LGBTQ+ equality, has a handy workplace guide with tips about how to create allies at every level of your organization.

Be proud, but be thoughtful

Pride comes in many colors and there’s no one way to celebrate. And the most important thing you can do for your LGBTQ+ employees all year long may be to simply listen and understand their unique challenges and needs.

That way, you’ll always have a clear understanding of why you’re celebrating Pride and what it means to your employees — and the LGBTQ+ community.