Once upon a time, there was a boy who grew up working at his family’s toy store. One day, he mustered up the courage to tell his parents that he wanted to leave the family business to be a Disney animator — but they said no.

So he took over the toy store, got married, and had a son of his own. When his three-year-old handed him a drawing, he decided to start grooming his son to be the animator that he never was. That three-year-old grew up to be an animator for The Simpsons and Pixar, but soon left animation for his true passion: storytelling.

That’s the story of Matthew Luhn — and today, his job involves showing professionals how to tell a compelling story that is impactful, persuasive, and memorable. 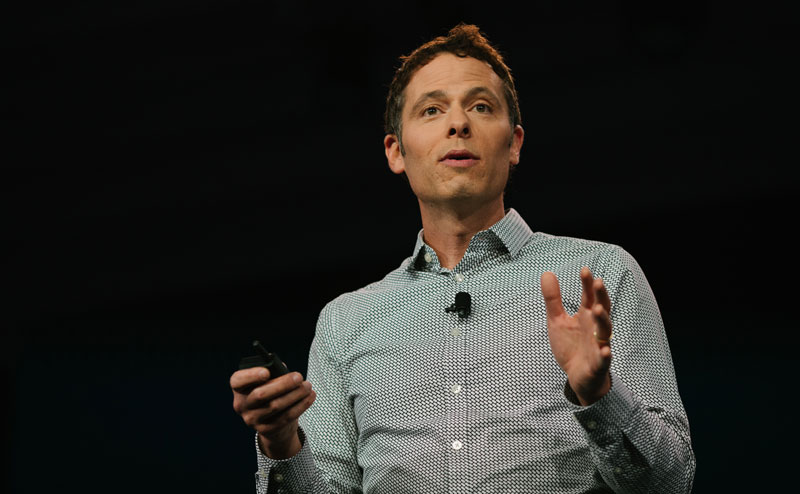 Pixar’s films move audiences like no other: They consistently pack an emotional punch, teach a satisfying lesson, and linger in your mind long after you see them. As a story supervisor at Pixar, Matthew helped shape heart-wrenching and warming classics like Toy Story, Monsters Inc., Finding Nemo, UP, and Ratatouille.

And while all those Pixar movies transport us to a totally unique world, they each follow the same principles of strong storytelling — Pixar’s secret sauce. (For example, the story at the top of this post follows Matthew’s three-part story structure: set up, build, pay off.)

At a past Talent Connect, Matthew shared some of those recipes for good stories: He talked about why stories are so powerful, what kind of stories companies can tell, and how recruiters can use the craft of storytelling to sell candidates on their company.

Tell stories to candidates because they stick, stir emotions, and drive decisions — that’s why they can be a companies’ most effective recruiting tool

Stories can be far more effective at selling a job than impressive facts and figures. While people in business (including recruiters) love to share stats and data, Matthew says research shows you only tend to remember about 5% of facts like that after just 10 minutes. (You’ll probably forget that stat too.)

On the flip side, people remember 65% of stories — that means narratives are 22x more memorable than facts. That’s because stories make us feel things. Just try to watch the first 10 minutes of UP without crying like a baby. Those emotions resonate in a way that facts can’t match.

Matthew points out that companies similarly tell stories, even if they’re not as concrete as a Pixar narrative arc. Tiffany’s tells a story of beauty and sophistication. Tesla tells a story of optimism and the triumph of technology. They stir up feelings, and that’s what makes these brands memorable.

Similarly, recruiters shouldn’t sell jobs as a dry collection of responsibilities and perks — you should strive to bring the role alive through stories that evoke strong feelings. "Don’t ever say your mission statement to someone,” Matthew says. “Tell them all the great things about your company — the ups and downs, the things you’ve learned — and let them feel the mission statement.”

Pixar movies never flatly tell you the theme of the story — they make you experience them. Facts, figures, missions, and visions by themselves aren’t memorable, impactful, or personal. Instead of reciting your mission statement, it’s way more effective to tell stories that illustrate it.

Most Pixar movies began with a compelling premise — a hook — that sets up the whole narrative, says Matthew. Hooks grab our attention because they’re unusual, unexpected, action-filled, or driven by conflict. (“You don’t need to do all four of those at once,” Matthew says.)

These are often phrased as a “what if?” question. What if toys came alive when we weren’t looking? (Toy Story.) What if a rat always dreamed of becoming a French chef? (Ratatouille.) What if a monster didn’t want to scare kids anymore? (Monsters, Inc.)

Recruiters should equip themselves with one-sentence pitches that wrap up the company and role they’re trying to sell. For example, a recruiter at LinkedIn might ask an engineering candidate, “What if you could help shape a platform that works to create economic opportunity for every member of the global workforce?”

After you’ve hooked your audience/candidate, you need to get the story moving by animating it with change and transformation.

Change catches our attention — the abrupt highs and lows of exciting stories fill our brains with dopamine and cortisol. Matthew points to the opening sequence of UP:

That rollercoaster of ups and downs is what triggers our emotions. In Pixar’s movies, that change isn’t just about reversals of fortune — they’re about personal transformation. Great stories promise to change your life, or at least change the life of the protagonist who we imagine ourselves to be.

In Toy Story, Woody starts as a self-interested ringleader and ends up learning the value of friendship and generosity towards other people/toys. In Finding Nemo, Marlin begins as an overprotective clownfish father and becomes a more trusting, wholehearted dad.

Your story should also focus on transformation and change. People love to hear about transformation, and that’s particularly relevant to recruiters. A new job is a genuinely momentous, transformative life event.

In light of that, recruiters should focus on how candidates’ lives will change — not just their day-to-day tasks, but also how the new role will change the way they feel. Matthew says the key to attracting talent through stories is getting people to see how their future would change if they joined your company.

Pixar’s films often start from a real, personal story. Inside Out, Matthew revealed, was inspired by the director’s personal experience raising his 12-year-old daughter who suddenly became distant and sad. The director tried to be happy to her all the time, but realized she needed to express her sadness: You need to embrace all the emotions — a lesson that he wanted to share through the movie.

Your company’s big-picture mission might be inspiring, but it’s not necessarily personal. You can make it more personal by peppering your pitches with personal anecdotes about ways that you’ve changed.

“When you share a personal, professional moment where you’ve changed in a positive way, you inspire people,” Matthew says. “That the best way to get people to change.” Recruiting is all about convincing someone to change their life.

Whether it’s a story of your own experience at the company or a moment of success from someone in the role you’re filling, using lots of little stories helps to make your pitch more memorable. If you tell a story about the software team running up against a massive roadblock, finding a way around it, and celebrating that success, your candidate will intuitively imagine themselves in that same position.

We’ve highlighted why talent professionals become better storytellers for a while now, but no one has brought it to life like Matthew.

When you walk out of Pixar movie, you probably pretend you weren’t crying. As you go about the rest of your day, you feel a little lighter — you carry the stories emotional impact with you. And the movie keeps coming back to you, even days later. Similarly, recruiters can use storytelling to make an emotional, memorable pitch to candidates.

Matthew highlighted this Always video for their #LikeAGirl campaign as a perfect example of a company telling a good story. “It’s got a great hook, it’s got a beginning, middle, and end, and it’s about change,” he says.

By catching candidates’ attention with a succinct hook, painting how their life will change, and coloring it in with personal stories, recruiters can make candidates feel excited about a new opportunity.