Nearly 69% of recruiters say that using data has helped them elevate their career and role within the company. That’s because bringing data to a conversation, be it with a hiring manager or a company leader, transforms your opinion into an actionable insight and can help you have serious strategic impact.

Just ask the LinkedIn recruiting team -- when they were facing the tough challenge of bringing in critical engineering talent quickly, they decided to “hack” this by using a data-driven approach. Taking readily available candidate information and plotting it onto a simple 2x2 grid has made all the difference by raising their outreach response rates from 28% to 85% and ultimately helped them deliver a more focused pipeline of top talent.

Wondering how this magic works? Watch Brendan Browne, LinkedIn’s VP of Global Talent Acquisition, explain the process in the latest episode of Talent on Tap:

When Brendan and his team were tasked with sourcing and bringing in top systems infrastructure talent, they decided that the only way they could be successful in a short amount of time was by developing a very deliberate, data-driven approach.

Here is what they came up with: 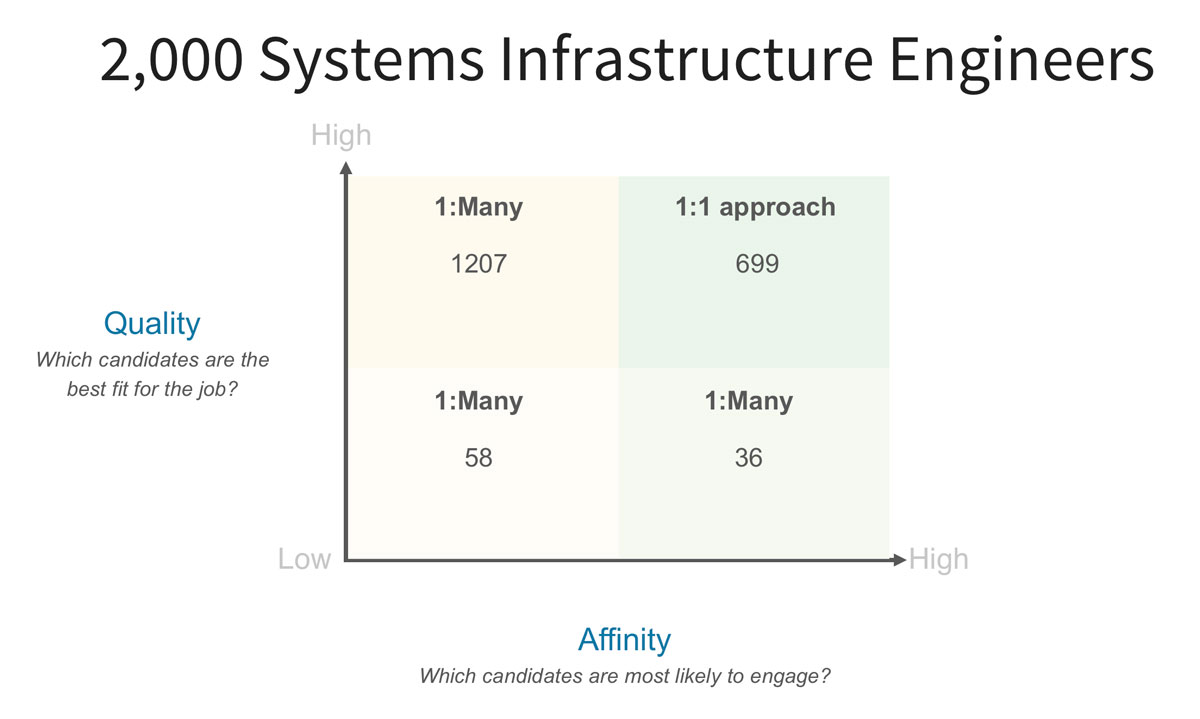 The main idea of this graph is that once you identify your total addressable market of candidates, you can plot them in this graph based on their quality and affinity for your company. Then you can tailor and prioritize your outreach to them, depending on which quadrant they fall into. The results speak for themselves.

Here is how Brendan’s team made this work step by step:

1. Work with hiring managers to align on what makes a quality candidate

The first step was to determine exactly what makes a high-quality candidate, based on conversations with the actual hiring managers at LinkedIn.

“We sat down with the head of engineering and said, ‘We need you to articulate for us in a very clear, quantifiable fashion what a world-class systems infrastructure engineer is, that you would hire today if you saw them,” says Brendan.

Knowing that disagreement between TA and hiring managers can lead to breakdowns for data-driven recruiting, Brendan and his team made sure to get their “quality scores” in alignment first.

2. Determine if the candidate has shown previous interest/affinity towards your company

Next, they looked at affinity—or the likelihood that the candidate will be interested in working forthe company. To measure affinity, they looked at candidates’ LinkedIn profiles for three indications that they might respond positively to a message or job offer. These simple questions can easily be applied to any role or organization:

3. Determine the size of your total addressable market (TAM)

Using these quality and affinity scores, LinkedIn’s TA team determined the size of the total addressable market (TAM) for systems infrastructure engineers that met the hiring manager’s criteria -- there were around 2,000 of them.

4. Then prioritize your outreach efforts to the top right of the quadrant

Brendan and his team then plotted all these 2000 prospects’ quality and affinity data on the 4-quadrant matrix to determine which candidates were their top priorities for messaging and recruiting.

The "1:1" bucket includes the prospects who are at both the highest quality and affinity level. In other words, these are world-class engineers who are also likely to respond to recruiting messages because of their signals and connections. These are the prospects that should take up the most of your attention and the "1:1" part means that the outreach strategy for this group was to be highly tailored and hands on.

The three "1:many" buckets also include great, highly-qualified prospects. But, given their lower scores, you can market to, share content with, and nurture them over time on a more mass scale.

Having plotted this information, LinkedIn’s TA team sat down again with the head of engineering to deliver the good news, explaining that 699 of the top SI engineers on the planet were already connected to their team and fell into the 1:1 bucket. They immediately set a strategy in motion, partnering recruiting with hiring managers to convert these warm prospects into candidates with personalized outreach.

“The hiring team had never seen this data,” says Brendan. “It was powerful and it led to us being able to influence.”

5. The result: Candidates from the 1:1 bucket had an amazing 85% outreach response rate

Brendan knew that taking advantage of affinity data meant that these prospects were more likely to respond and consider a role with LinkedIn’s engineering team, but the actual results went beyond his wildest expectations.

By targeting high-quality, high-affinity prospects, their response rate shot up from a historic 28% level to an incredible 85%—a skyrocketing statistic, and the biggest leap Brendan had ever seen. Even better, the prospects made it through interviews faster and with more success than any other type of candidate, including cold sourcing, applications, and referrals.

The overall process is relatively simple, and its results so impressive, that Brendan believes it would be foolish for a modern recruiter not to use such an approach. With just this simple grid in place, it becomes so much easier for recruiters to show hiring managers not only the size of their total addressable market for a specific role, but also why prioritizing high-quality, high-affinity candidates makes such a difference in response rates and successful hires. Plus, all of this data is easily accessible via LinkedIn Recruiter.

“If you’re not showing up with data... you’re not doing yourself any good,” says Brendan. “This is an easy way to start building partnerships and credibility with the business.”

LinkedIn’s team knew they weren’t harnessing the full potential of data-driven recruiting, but this model helped them quickly and easily turn that around. With a just four data-driven quadrants, it becomes so much easier to share your data and insights early and often with hiring managers, build influence within your company, and make stellar hires faster and more frequently.

* Photo by Marius Masalar on Unsplash