“Work sucks,” says Laszlo Bock—Google’s SVP of People Operations from 2005 to 2016—speaking at the SHRM 2017 Conference.

He’s actually a pretty positive guy, but he’s quick to admit that most workplace cultures could use some work.

“Work sucks,” he repeats, “unless you make it better.” And since we spend most of our waking hours working, it’s really, really important to make it better when we can.

No, that doesn’t mean putting a Pac-Man machine in the lobby or instituting Taco Tuesdays. “I want to dispel the myth that [a good] culture is about free food and beanbags and lava lamps and shuttle buses—and even a lot of money,” Laszlo says.

It’s about finding meaning in your work, enjoying the freedom to get in your groove, and doing things just a little differently. Here are Laszlo’s six ways that HR professionals and recruiters can make work a better, happier place to be.

1. Give meaning to your jobs—even if that meaning isn’t obvious at first 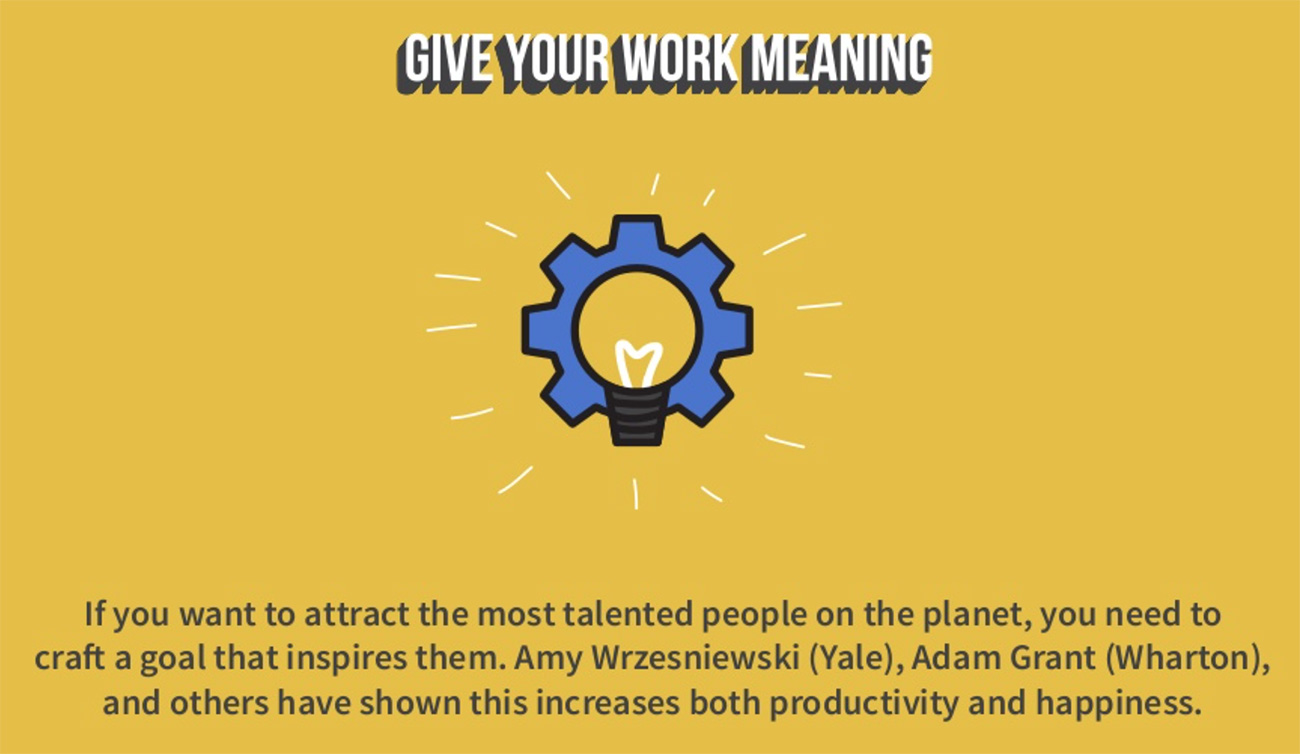 Lots of companies talk about being purpose-driven, but to many, work is just a paycheck: a slog to get through so you can pay the bills. But people are happier and more productive when they can find meaning in their work—even if theirs seems boring or uninspiring at the surface level.

Amy Wrzesniewski of Yale famously showed that even janitorial staffers can find meaning in their jobs: her studies found that janitors working in hospitals went out of their way to make their jobs more meaningful—like spending extra time talking to patients who seemed lonely.

In doing so, they transformed the meaning of their jobs: they weren’t just cleaning floors, they were “helpers of the sick,” an integral part of the healing process. Those who did so weren’t just happier, they also performed better than their peers.

Similarly, studies by Adam Grant of Wharton found that “employees who know how their work has a meaningful, positive impact on others are not just happier than those who don’t; they are vastly more productive, too.” He looked at workers calling potential donors at university’s call center, where work can seem monotonous and morale is often low.

After the call center workers spent five minutes with the students who received scholarships funded by the donations they were soliciting, their productivity went through the roof—shooting up from a weekly average of $186 to more than $500!

Again, the work didn’t change, but the meaning was transformed: they weren’t just making boring calls, they were making a real difference in the lives of these children.

Managers and HR professionals need to help candidates and employees see the meaning behind their work. “If you’re a lox slicer, you’re feeding people,” Laszlo writes in his book Work Rules! “If you’re a plumber, you’re improving the quality of people’s lives, keeping their homes clean and healthy… Whatever you’re doing, it matters to someone. And it should matter to you.”

2. Trust your people—give them more freedom than you’re comfortable with 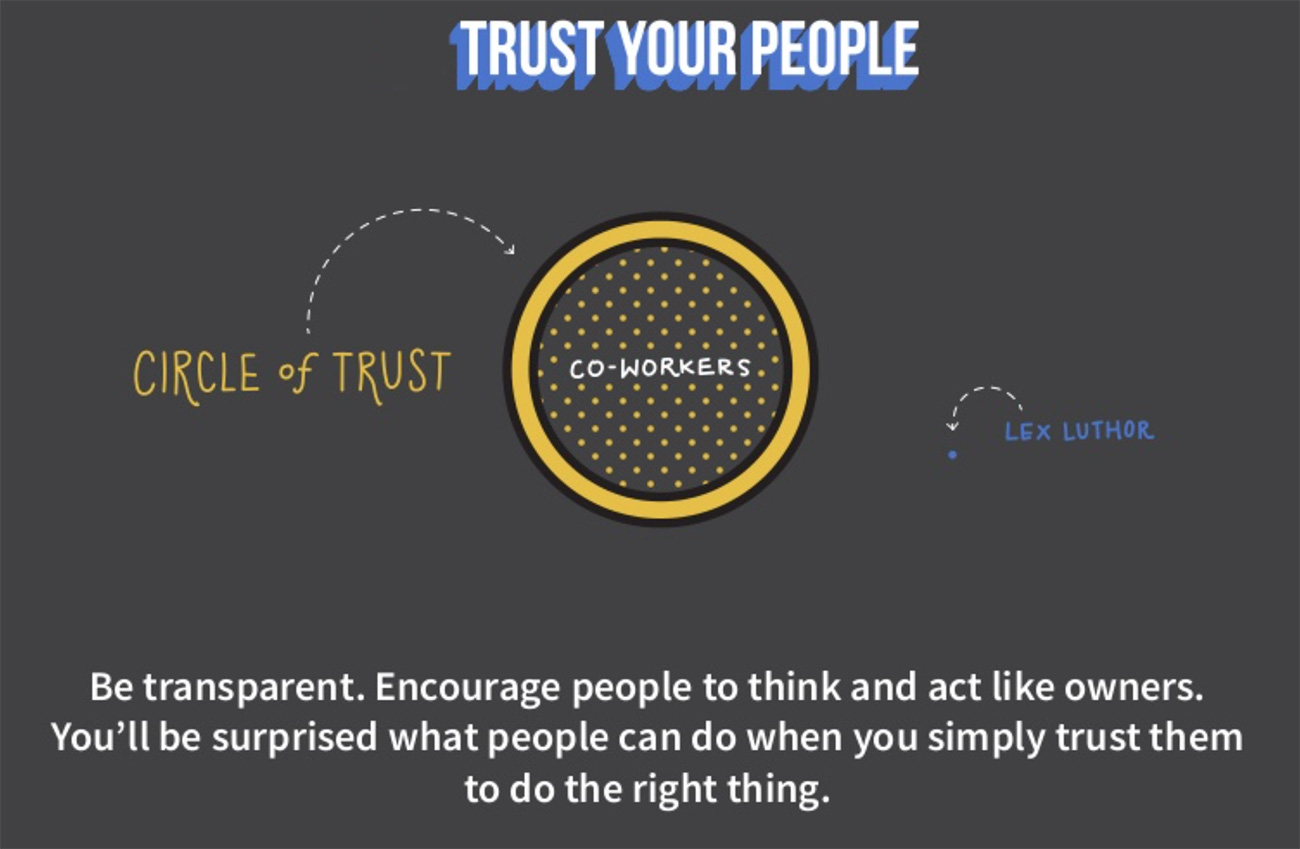 Laszlo believes that people are inherently good, but that’s not how most companies treat their employees. Trust them to do the right thing and—surprise, surprise—they’ll do it. Giving employees the freedom and power to shape how they work isn’t just great for morale—it’s good for business, too.

Richard Locke and Monica Romis of MIT compared two factories in Mexico making Nike products. The two were similar in most respects, except for organization and HR policies: in one, employees were well paid and given the freedom to decide the pace and order of their work; in the other, employees were overworked and given few freedoms.

As you’ve already guessed, the self-run factory was almost twice as productive and produced the same items at a much lower cost than its micromanaged counterpart.

The lesson is clear: employees know their work better than anyone else, so let them have more of a voice in how they do it. Not only will employees be more engaged, but they’ll also enjoy a sense of ownership and do better work. "If you give people freedom, they will repay you by being more productive and effective," Laszlo says. 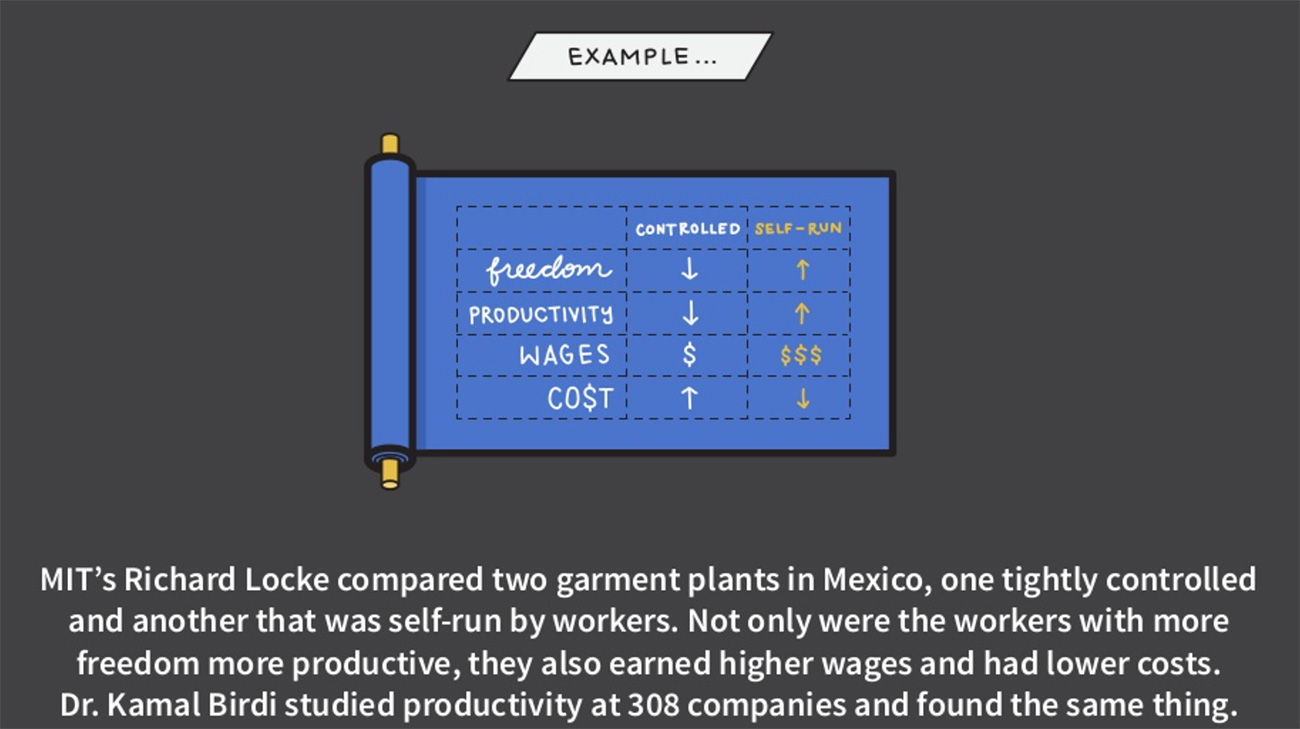 3. Hire people who are better than you—hire by committee to avoid the biases of hiring managers 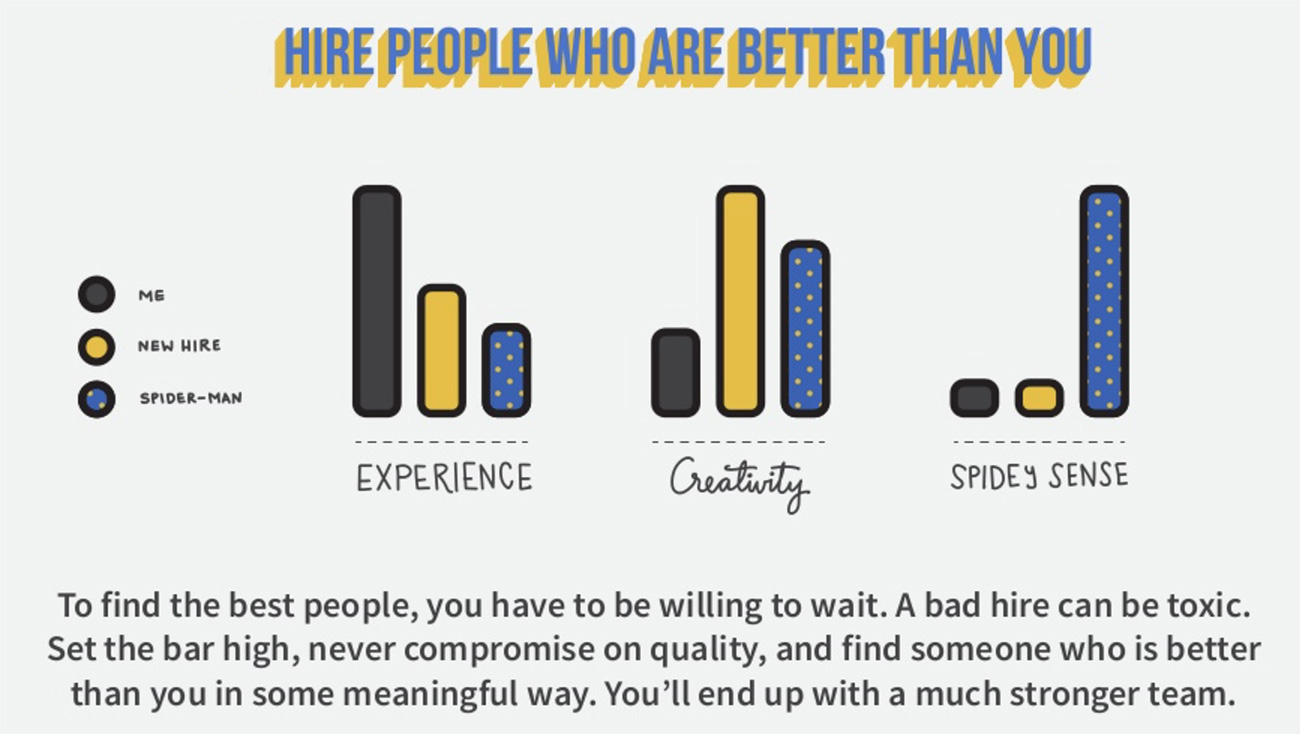 A bad hire is worse than no hire: a toxic employee can poison the morale of the whole team. But when hiring managers are the ones calling the shot, they could get antsy pretty quickly, settling for a less qualified candidate just to get a warm body in the position.

Hiring managers can also be biased, both purposely and implicitly. Whether they settle, balk on a superstar candidate who might outshine them, or fall victim to confirmation bias, managers aren’t the most objective.

You can do two things to fight these biases.

First of all, don’t let the hiring managers make the final hiring decisions. Instead, hire by committee to avoid some of the pressure, fear, and implicit biases that managers bring to the table. The committee “should have nobody on it who will actually work with this person,” says Laszlo.

Second of all, define crystal-clear criteria for the position, then evaluate candidates with those objective standards in mind. Stick to these attributes and try not to be swayed by first impressions.

New hires should be better than you—they should elevate the company, not just slot into a role. If they’re falling short of that metric, take more time to find the right people, even if the hiring manager says it can’t wait.

4. Pay “unfairly”—or rather, pay your top performers a lot more than others 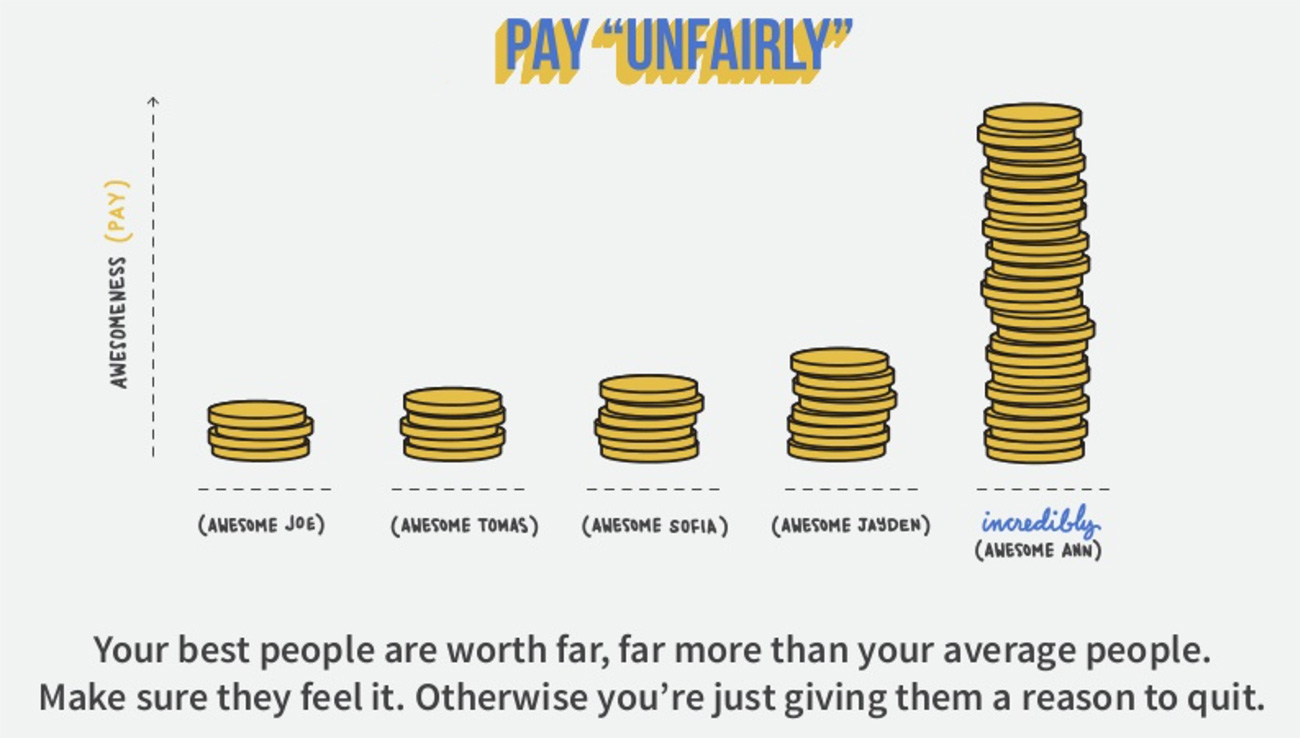 LeBron James makes a lot more money than the average basketball player, and that makes sense: he can single-handedly carry a team from mediocrity to championship contention. But in most modern workplaces, the “A players” usually only get paid around 30% more than your “B players”—even if they make 10x the impact.

“Performance follows a power law distribution in most jobs,” writes Laszlo in Work Rules! “90% or more of of the value on your teams comes from the top 10%. As a result, your best people are worth far more than your average people.”

Their pay should reflect their disproportionate impact: otherwise you’re incentivizing your superstars to walk away for the bigger paycheck they can rightfully earn at a competitor.

5. Nudge employees in the right direction—small changes lead to big shifts over time 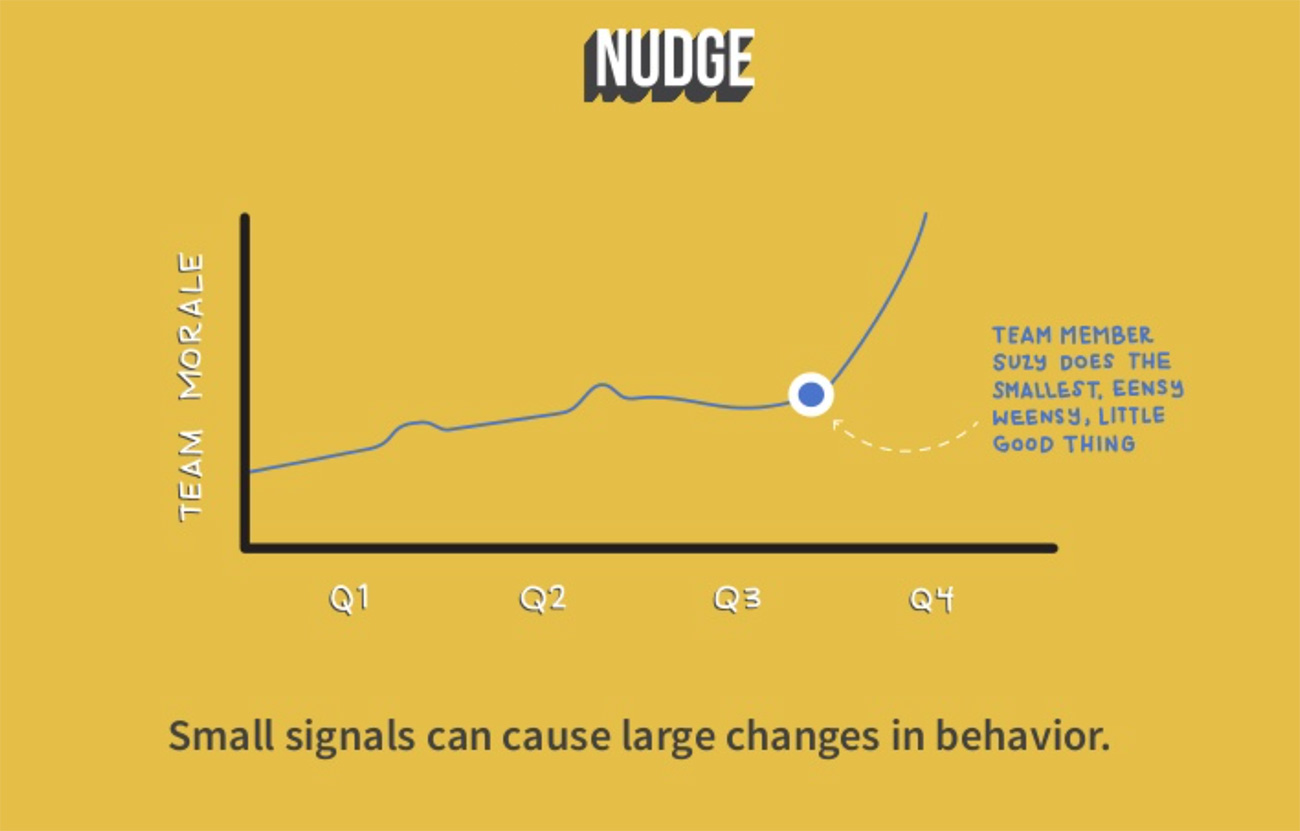 Tiny, low-effort nudges can make a huge difference and get people to make better choices. For example, Google changed up its kitchen setups, placing fruits and veggies in visible, eye-level spots and hiding junk food in opaque containers. With that little tweak, workers went for healthy snacks a lot more often.

Beyond wellness, this lesson can also help your team work better. "If you give people these small interventions—these nudges, these checklists—it does make a difference,” says Laszlo.

While it normally took Google’s new hires about nine months to ramp up to full productivity, Laszlo was able to bring that down to six months simply by sending an email reminder to the new hire and their manager.

The content of email itself wasn’t anything too revolutionary: just reminders to meet people, confirm you have the right equipment, etc. But that little nudge shaved three whole months off the path to productivity.

(Sure, that only amounted to a 2% increase over the life of an employee—but a 2% increase across 50 employees means you get the impact of an extra worker at no extra cost.)

6. Enjoy—and do it all over again 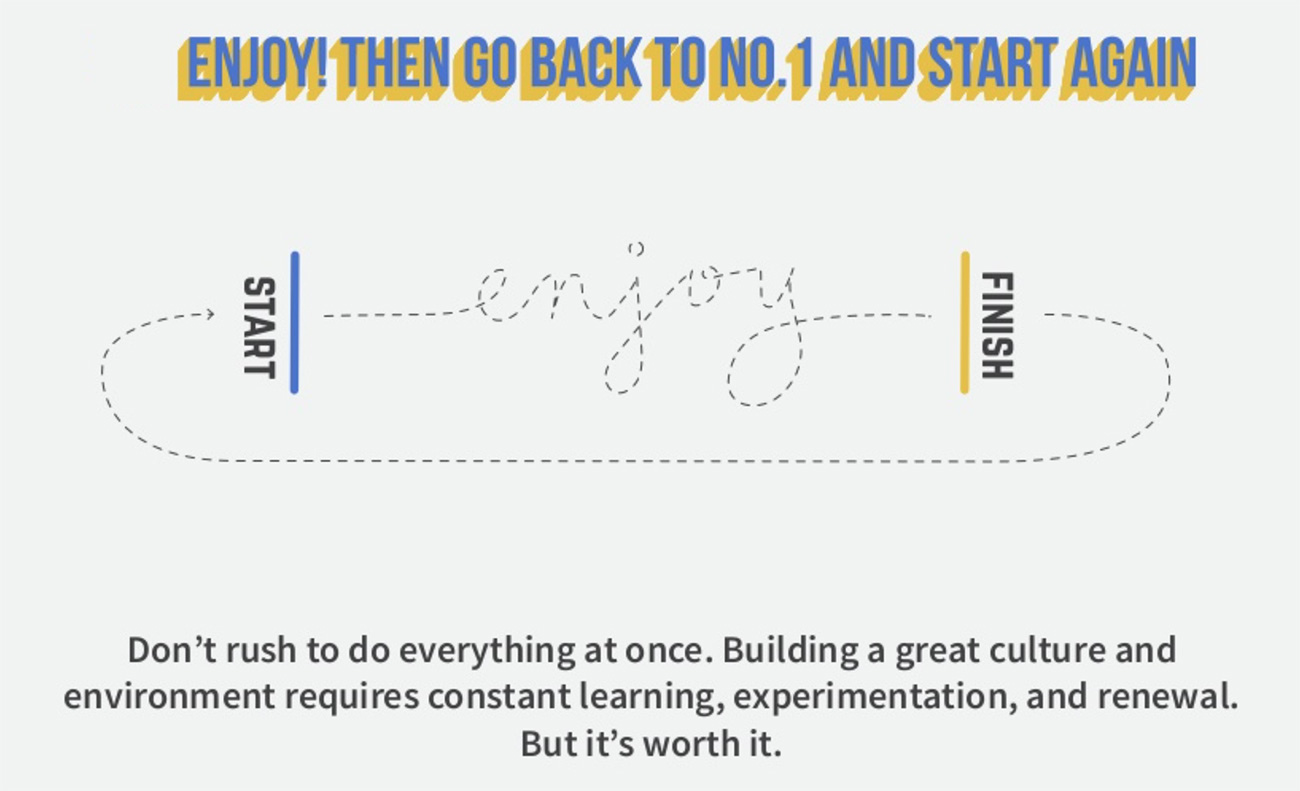 Your work is never done. Let’s not pretend that you’ll tick through this list and fix everything in one fell swoop. Improving your workplace is an iterative process that you complete bit by bit, tweak by tweak.

Keep repeating this process, assessing the results, and optimizing your practices further. You won’t see an instant transformation, but over time, your culture will get better and better.

In Laszlo’s mind, it’s a binary choice: we can either accept the world of work as it is, “or,” Laszlo says, “we can do something—anything—to make work get better. Or at least suck less.”