That’s how long a job-seeker, on average, spends reviewing a job description before they decide to apply or not. And, many of them don’t even review the whole ad -- according to a study using eye-tracking software, the bottom one-third of the description is often not reviewed at all. Just take a look: 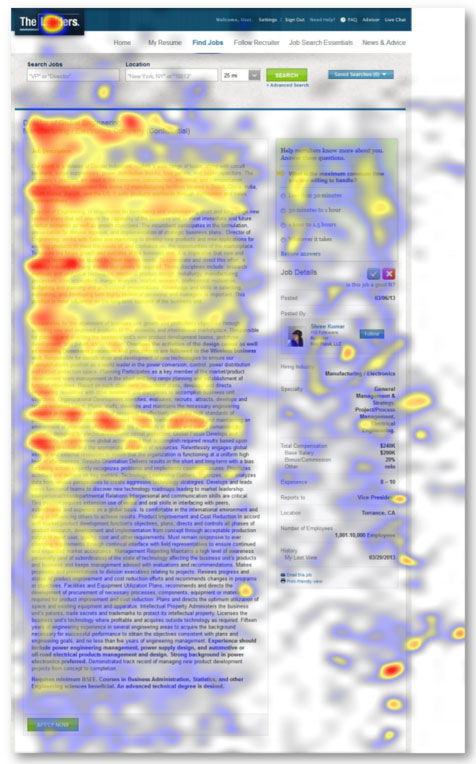 In the image of the job description, the sections of red and orange were more thoroughly reviewed and yellow was pretty well skimmed over. But, they didn’t even read the rest.

“How are you supposed to find the right candidate if they’re not even going to consume a job description end-to-end, or even get to the skills and qualifications section?” asks Chris Mulhall, the Head of Talent at PointClickCare during his session at Talent Connect 2016. “That’s the challenge - how do we create more engaging content that a candidate will actually view?”

At PointClickCare, a software company for senior care providers, Chris and team have come closer to solving this problem after realizing their boring, traditional job descriptions were turning candidates away.

So, they started experimenting with job descriptions in different formats - things like infographics, video job descriptions, and more casual question-and-answer type formats. They also performed a research study to gauge whether there are certain job description mediums that resonate with candidates more so than others - Read on:

Video: A great way to give candidates an authentic look at the role and company

The format is usually a 1-to-2-minute day-in-the-life segment, giving you a preview of the job, or a pipeline into a department or the company culture as a whole, Chris said. PointClickCare made a breezy, fun video of its quest for Java and mobile developers:

“When done correctly, they’re very authentic, and it’s a great way to get your message across,” says Chris.

The video succeeds because the employees who are interviewed appear to be having a good time, enjoying their coworkers and talking about the impact the company can have. They also emphasize the company’s cultural activities, including attending CrossFit bootcamps.

Infographic: Speaks to people's motivators in a visually engaging way

Another format Mulhall loves is the infographic, which can be easily designed, by the way, with a tool like Piktochart (for an annual subscription).

“What I really like about these, is they’re a great way to articulate some of the motivators that are a little more difficult to describe in a text-based job description,” says Chris. “This includes things like career growth potential, the market, the career path that you might go on."

For example, Here’s what PointClickCare put together:

The data includes the number of sales reps who have been promoted in the past year as well as data demonstrating what every sales rep cares about: the potential to meet quotas, using the statistic that 10,000 baby boomers turn 65 every day in North America.

The graphic also shows the potential for distinct career paths. “So they come in as an account development rep,” Chris said, “and they can either go upward as an individual contributor into more progressive and senior sales roles, or go the path of a people leader.” Chris noted that this format looks really good on a mobile device, which is important because 60% LinkedIn’s traffic now arrives that way.

The comic strip and Q&A: The most fun—and the most successful with tech talent

The most “out there” format that PointClickCare has tried out is the comics strip (which Chris likes to make using Pixton). Now, it’s not that wild–the company merely uses it as a fun draw at the top, and then proceeds to an engaging Q&A covering topics that candidates would typically ask about. The benefit, as compared to a typical text description, is the language and tone is light and casual.

Sometimes, the company makes its own comic strips, using a website called Pixton, as it did here:

Other times, the company pays for a cartoon, and Chris has found that everyone loves Dilbert. Here’s what one such job description looks like:

"And so, as you see, we use a comic strip, and that’s our initial hook to get a candidate’s attention," says Chris. “But after the initial hook, you see that the format is more of a question-and-answer type format.”

The description includes a link to the company’s Glassdoor and LinkedIn pages, where prospects can read employee reviews, because Chris wants the candidates to “do their own homework and get a realistic job preview.”

And if you read through the whole thing, you’ll see it even includes a fun answer about what a typical day for a software developer looks like: “Debate Star Wars versus Star Trek,” a point that Mulhall said got more feedback from his software team than any other bullet point.

So, which format is most effective?

As the Head of Talent at PointClickCare, Mulhall didn’t just to play around with different formats to see what might work—he wanted data on whether those formats actually improved the company’s reputation. So his company commissioned an independent research study, and asked 600 participants (half for tech jobs, half for non-tech jobs) to view the different descriptions (the traditional, boring text-based job description, the infographic, the video, and the comic strip). Participants were then asked to rank which ones they preferred, as well as describe what they thought of the company after they viewed each one.

The results: the non-tech workers preferred the rich video format. For tech candidates, they liked the comic strip and Q & A, but also liked the video.

Here’s a closer look at which formats each segment preferred: 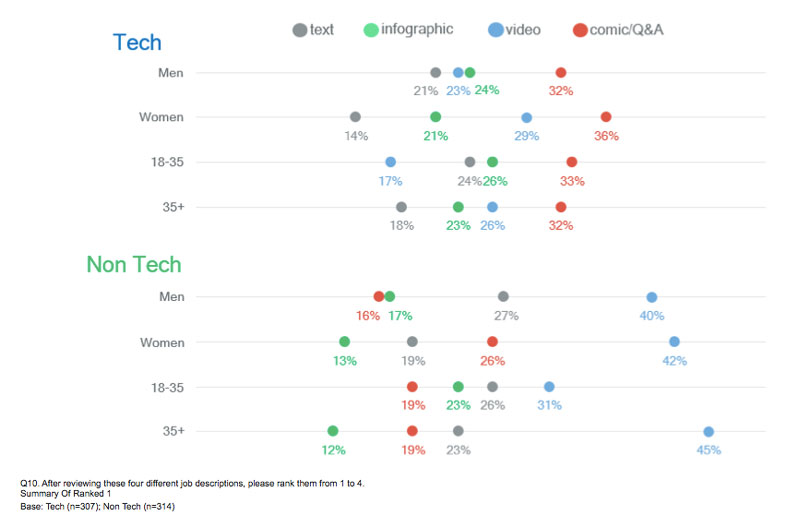 Another takeaway: the non-tech candidates don’t like the infographics—to Mulhall’s dismay, since he enjoys making them with Piktochart—because they sometimes seemed more like company advertisements than job descriptions. In contrast, video “seems like a pretty safe choice, it was least often ranked as a least favorite for both tech and non-tech,” he said.

Overall, the survey showed that the standard text description led candidates to believe the company was boring and bureaucratic; it was the least preferred format. Meanwhile, tech workers who saw the comic strip and video formats rated the company as innovative and inspiring, not boring. The video performed best with the non-tech workers. 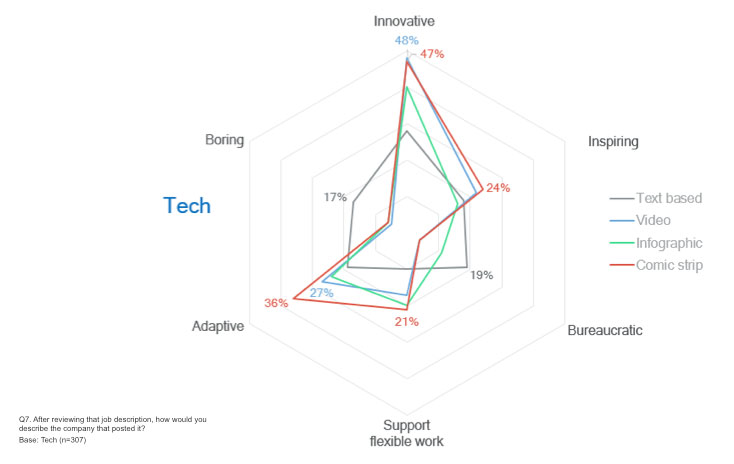 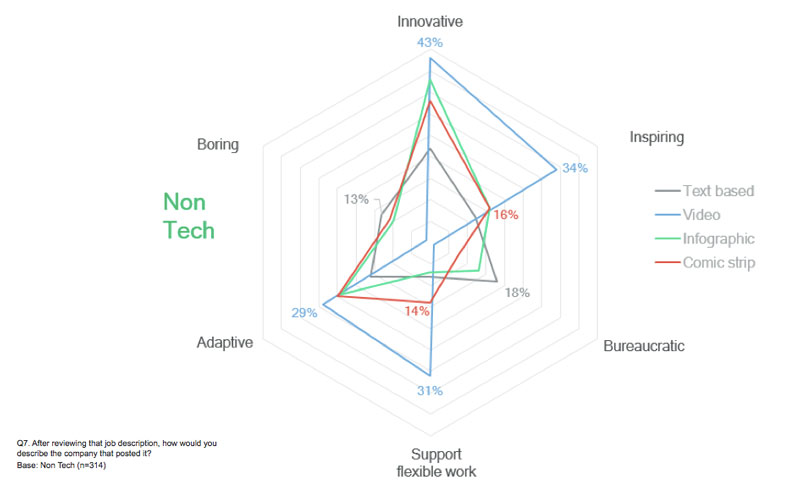 “So clearly there’s a disconnect between the types of job descriptions that we’re providing the candidates, and what they want to see in a job description,” says Chris. The traditional long, boring job description just won't cut it anymore.

Changing their job descriptions has lead PointClickCare to better hires

Not only did Mulhall’s team create descriptions they’re proud of, but he’s seeing results in terms of better hires. He’s seen a 50% decrease in new hire attrition, which he attributes to the more specific, evocative information that the candidates are now seeing through the new formats.

“They could see the video, see the work environment, and then decide that they don’t want to sit at a big long table right beside another engineer,” he said.

The result seems to be more engaged candidates who have a much better understanding of the company and the position before they apply. And all that happened because they stuck around for longer than 14 seconds.

Learn about what you can do with Jobs on LinkedIn.