If you’re one of the 4.8 million people who follow Jeff Weiner on LinkedIn, you probably feel like you know him. Between his likes, shares, comments, and long-form posts, you’re likely familiar with his leadership style, his passion for tech, and his support for his employees.

Business leaders often ask Jeff how he’s able to build such a large and engaged following.

“It comes down to authenticity,” he told the crowd at Talent Connect 2016. Social media is the place to “authentically communicate what you are most passionate about, what inspires you, and what you’ve learned or experienced that others can benefit from.” He adds, “The more authentic you can be, the more effective you will be.”

Whether or not you’re a CEO, you still have a professional network with whom you want to interact, inform, and/or influence. No matter how many connections you have or what your title is, engaging more effectively on social media can give you an edge.

Here is Jeff’s simple recipe for engaging on social media and what it looks like in action:

1. Talk about the things that matter to you

If you’re wondering what you should talk about on social media, Jeff’s simple answer is, “Whatever you care most about.” Whether it’s sharing an article, writing a post, or engaging with other people’s content, if it’s meaningful to you, then you should go ahead and discuss it.

Only you can decide what is meaningful. If you are true to yourself though, says Jeff, the engagement will take care of itself.

Based on his LinkedIn activity, here’s what matters to Jeff. Use these categories as inspiration if you’re stuck on what to talk about.

As the CEO of LinkedIn, Jeff naturally posts updates about LinkedIn’s products and initiatives, but it’s still only about 20% of the time. Most are responses to product feedback rather than flat-out promotions. He often cc’s people on his team to help address the issues, further increasing engagement. 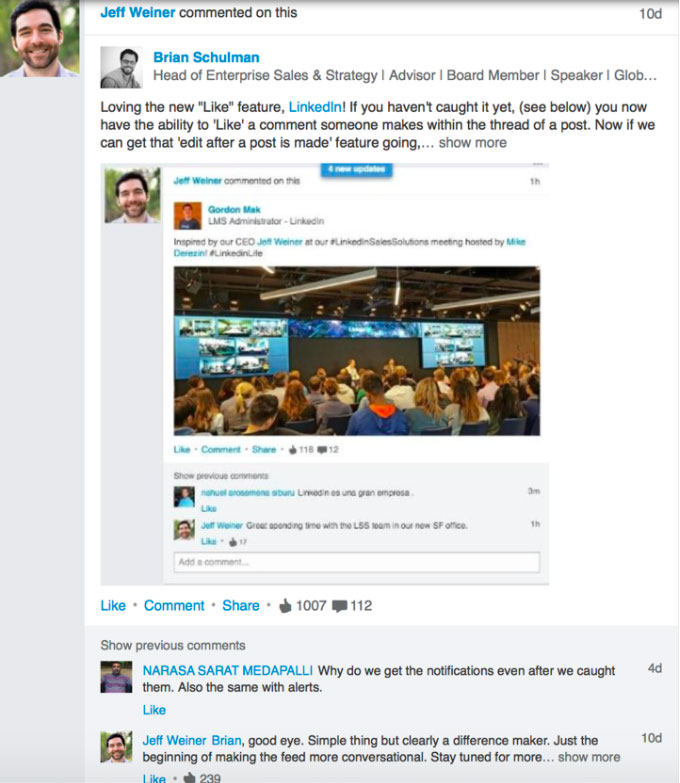 Jeff also engages in discussions about tech and the economy. His interest in these areas makes sense considering LinkedIn is a tech company trying to create economic opportunity for everyone in the global workforce.

You’ll see Jeff sharing stories and advice from his peers and congratulating other leaders on their accomplishments.

Whether it’s liking an employee’s photo from an offsite or giving a shout-out to the sales team, Jeff is enthusiastic about daily life at LinkedIn. By naturally engaging with his employees in front of millions of followers, he puts LinkedIn’s talent and culture on display and demonstrates his accessibility and connectedness as a leader. 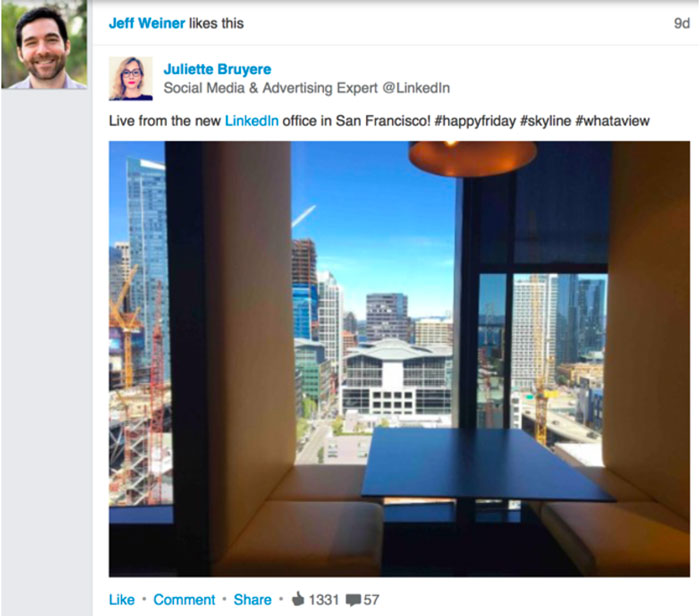 Jeff’s remaining share of updates reveal two other causes he cares about - diversity and education. Every once in awhile, he talks about sports or entertainment too, but there’s always a professional tie-in too. 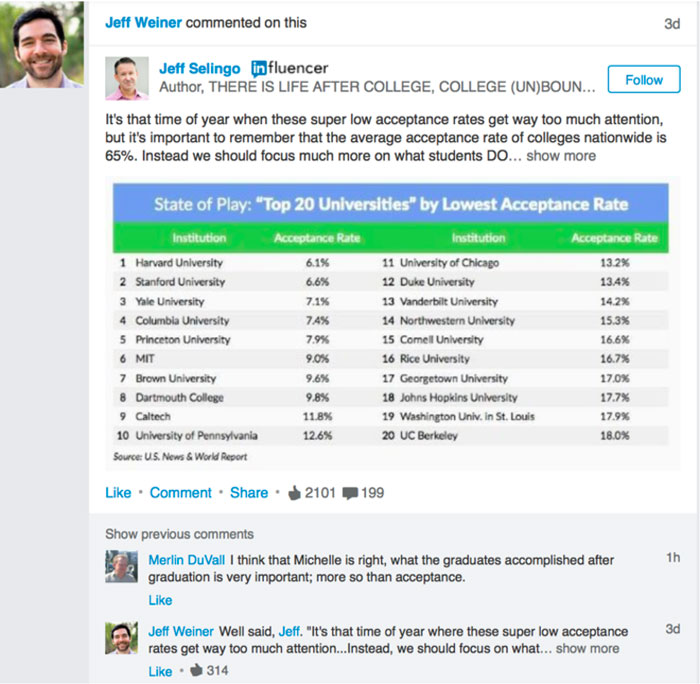 “The more you share talking points pushed down to you from your organization, the less authentic they become, and the less value you create for your talent brand, your company, and yourself as a recruiter or hiring manager.”

Instead, Jeff advises that you take whatever guidance you care most about, e.g., your company’s mission, values, or objectives, and “express that in your own way, in your own style, and in your own voice. Because that is when people are going to pay attention.”

One way Jeff adds his own voice and drives engagement is by teeing up the content he shares with a 1-2 line personal opinion or asking a question.

3. Do the posting yourself

Jeff advises not to have others engage on your behalf. Your head of marketing or your external consultant may be just as smart and capable, but they aren’t you.

Jeff recalled the Fortune 500 CEO who came to him when he couldn’t understand why he wasn’t getting as many likes, comments, and shares as all the other CEOs he was seeing. So Jeff asked him who was writing his posts. This prompted the CEO to stop outsourcing and start telling his own stories. His engagement skyrocketed. “These posts have to come from you if you're going to generate engagement,” recommends Jeff.

You’ll notice Jeff praising other companies based on his personal experiences, something that would be hard to pull off if he himself weren’t behind the wheel.

You may be surprised to learn that Jeff was uncomfortable on social media when he first started out using it. Like many of us, he worried about what to say, how to say it, how often to say it, and what lines he might be crossing. But eventually he just took the plunge.

“You just feel your way. You will talk about things you wish you hadn't, engage one too many times, say things you wish you could walk back,” he continues, “But you will also help other people with your unique experiences and perspectives. People will express gratitude in ways you could never fathom. You will connect with people you never would have connected with, and it's enormously powerful.”

3 ways to experiment on social media:

Whether you’re a Fortune 500 CEO or a recent grad just starting out, you should learn from Jeff Weiner’s approach to social media. Start by simply being yourself, and good things will follow.

The post is based on Jeff Weiner’s fireside chat during Talent Connect 2016 (below) and an analysis of his LinkedIn activity during April 2016.