7 Ways to “Hack” Your Interactions with Candidates, Glen Cathey Style

It’s not by coincidence that Glen Cathey carries the title of “Boolean black belt” -- he is one of the most accomplished and well-known sourcing leaders in the industry. However, his expertise doesn’t stop at finding people - Glen is also an expert in the human side of recruiting.

In fact, one thing that’s been a focus of Glen’s lately is figuring out exactly why and what people respond to as well as what motivates them to take action. A key clarifying moment for him was reading Chris Hadnagy’s book, Social Engineering: The Art of Human Hacking. The book discusses the art and science of skillfully maneuvering people to take action and its insights inspired Glen to adapt some of the concepts into a few “human hacks” that help recruiters be more successful at engaging, influencing and recruiting potential candidates.

Here are a few of the most useful and actionable ideas for “hacking” your interactions with candidates that Glen shared during his top rated session at Talent Connect 2016:

1. Nail the first impresson by projecting warmth and competence

Glen always knew that first impressions mattered, but it wasn’t until he began researching social engineering that he discovered the stereotype content model (SCM), a psychological theory that explains exactly how first impressions are formed. 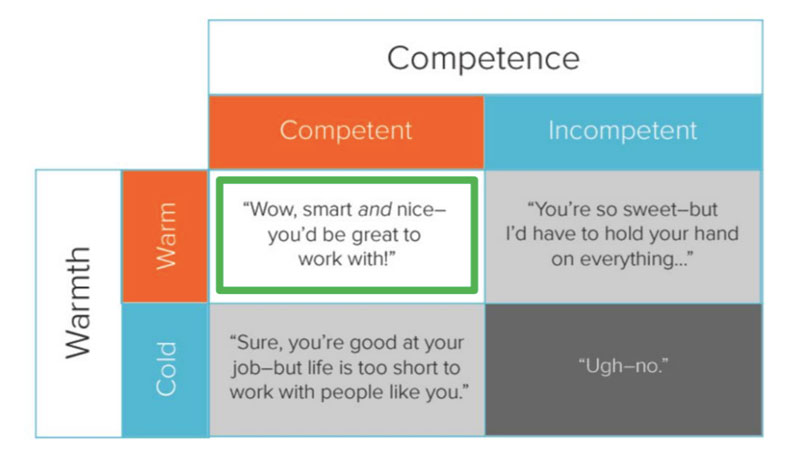 Essentially, it boils down to two things: warmth and competence. When people meet you, they’re instantly deciding whether they like you, and whether you’re good at what you do.

Knowing that, the question becomes: how do you make sure you come across as both warm and competent in your initial outreach efforts?

“My secret weapon was to be incredibly detailed and specific about exactly why I was reaching out to them, which wasn't [about] the job I was recruiting for, but rather their skills and experience, to show them I understood them,” says Glen. “I would go into detail and show them that I not only read their profile, but that I had performed some additional research whenever possible. That's one key element to showing people that you know what you're doing as a recruiter."

Being likeable or “warm” can be trickier, but for Glen, it all comes down to being human and, if you can, making them smile. The basic architecture of the brain ensures that people feel first and think second, and marketers have been taking advantage of this for a long time. “If you can say something in a voicemail or put something in your email just with a little bit of appropriate humor and bring a smile to their face...it makes your more likable and more human,” he says. “Project a confident and positive attitude - because they can read/hear you smile,” he adds.

To illustrate this, Glen points to brands like Zappos and Southwest Airlines - both known for having a company culture that’s not stiff and corporate. He points to their customer service in particular, which is intentionally fun and quirky in a way that’s designed to make you smile.

2. Take the time to truly listen and make the conversation about them, not about you

“Many recruiters aren't aware of the fact that their messaging and initial conversations with potential candidates focus heavily on the job they are recruiting for, their company, etc. Intentional or not, it comes across as me, me, me,” says Glen. Instead, he believes you need to change your language and make it all about them.

“If you go in leading with the job, the problem is you skip the building the rapport, discovering their needs, preventing or overcoming objections, things along those lines,” says Glen. “How can you fill a need for someone if you don’t take the time to discover their need first?” he asks.

To build rapport and discover that need, Glen recommends asking a lot of open ended questions, actively listening and being genuinely interested in what the candidate is saying. You need to truly understand their current situation, their challenges, their plans, and their desires in order for them to 1) like you and 2) want to continue the conversation.

3. Anticipate candidate objections and get past them with mirroring, framing, and preloading

“Empathy is the tool of the social engineer,” states Chris Hadnagy, and Glen makes it the center of his approach to human hacking. He believes that if you don’t learn to put yourself in the candidate’s shoes, you’ll be stuck trying to win them over with manipulative tactics or robotic approaches. Only once you understand their needs— truly making the interaction about them, and not yourself—can you unlock true success.

“You're not the only person that's trying to recruit these candidates, and if you're targeting passive talent, you have to appreciate the fact that they're not looking - so why would they respond to any recruiter, let alone you specifically?” says Glen. Because of that, you have to be prepared for their objections.“You have to figure out how you can influence them to respond and, when they tell you they're not looking, you have to get them to get out of ‘I'm not looking’ mindset to ‘maybe I could be looking?’

To do this, Cathey suggests three tactics:

4. Get candidates to want to talk to you by using elicitation

“One of my favorite quotes of all time is from W. Edwards Deming: ‘If you don’t know how to ask the right questions you discover nothing, you learn nothing,” says Glen. Elicitation is asking questions that stimulate people to respond and take the behavior you want. This is key because passive candidates are often not motivated to respond to the recruiters reaching out to them, and they may not really want to answer your standard recruiter questions either.

Here are a few elicitation techniques:

5. Use the power of scarcity to leverage candidates’ natural FOMO

Think about those secret societies that make membership a highly exclusive privilege, or anyone who claims they’re playing “hard to get.” What attracts people to them? Scarcity.

“Human beings find things more valuable if they feel like they're hard to get,” says Glen. And, recruiters can use this to their advantage. “There's a sense of urgency that you can create by saying ‘there's a window for this opportunity and I would hate for you to miss out.” he says.

As Glen points out, recruiters are often up against the same obstacles. In many cases, their biggest hurdle is that candidates simply aren’t actively seeking new opportunities. By harnessing the power of scarcity, he leverages candidates’ natural “FOMO” (fear of missing out) to push them to act.

To illustrate his point, Glen compares the approach to common strategies used in sales and marketing. “They use phrases like ‘this weekend only’ or ‘call in the next ten minutes’ to get this deal,” he says. This works because people generally don’t want to miss out on a great opportunity and will often take action not to.

With commitment from hiring managers, recruiters can employ this strategy by reaching out to candidates and explaining they have the ability to schedule interviews "as quickly as this week." This not only shows that there is a real opportunity, but also that time is of the essence – without responding in a timely fashion, they may literally miss out on an opportunity to explore the next step in their career. A close and specific deadline can motivate people to act for fear of missing out.

6. Create curiosity by intentionally leaving gaps in your messaging

Whoever said curiosity killed the cat probably wasn’t a recruiter. In fact, curiosity is one of the most useful tools that a recruiter can use to pique a candidate’s interest in a position and elicit a response. 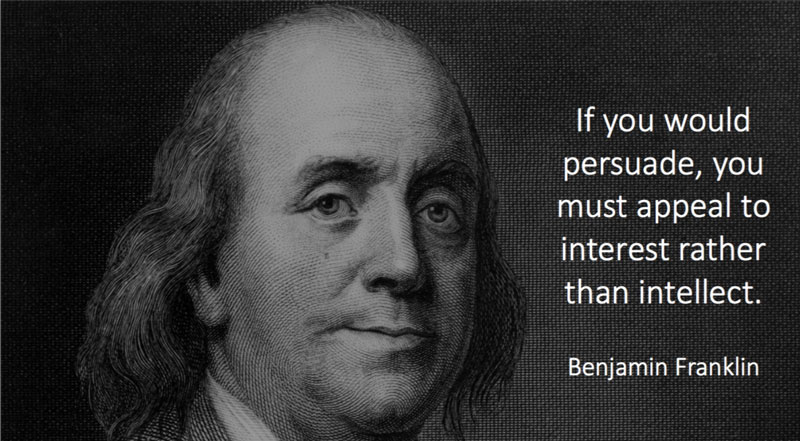 Glen illustrates his point with a well-known Benjamin Franklin quotation (above). The gist for recruiters: you won’t convince somebody to call you back by reciting the all of the potential benefits of the opportunity—in reality, you’ll intrigue them more by leaving details out.

For Glen, this strategy goes back to the theories of George Loewenstein, a behavioral economist. Loewenstein was curious about situational interest, and in particular the way that interest and curiosity are related to gaps in knowledge. His “gap theory” of curiosity states that these gaps actually cause us a kind of psychological pain—when we’re curious and we don't know something, it feels like we have an itch that we can’t scratch.

As a recruiter, Glen leverages the gap theory by intentionally building such gaps into his messages and initial conversations. “I feel the number one mistake recruiters make is when they lead with a job, and so there's no knowledge gap.” says Glen. “If you're a recruiter and you reach out to somebody and very specifically reference their experience as the reason why you're reaching out to them and you don't talk about a job that you have, you've created a gap.”

For example, if you’re emailing or leaving a voicemail for a prospective candidate, it might be better not to go into too much detail about the specific opportunity in your initial messaging efforts. If you leave out crucial details, you’ll spark the candidate’s curiosity by creating a gap in their knowledge. When you reference their specific experience, they will have to assume you probably have a relevant opportunity, but because you didn't give everything away in your first message, they’ll be more likely to respond simply because they have to in order to "scratch the itch" and learn more.

7. Use “social proof” to spur candidates to take the action you want

Social proof is a “psychological phenomenon where people assume the actions of others in an attempt to reflect correct behavior for a given situation.” In other words, it’s basically saying “Hey, these other people are doing it, you should too.”

For recruiters, this means that you can state or even imply (as long as it's accurate) that other candidates like them have taken a particular action (spoken or interviewed with you, have been hired, etc.) and make the candidate you are reaching out to want to take that action too.

Here are some examples of how you can leverage social proof in your messaging when you first reach out to candidates:

According to Glen, using social proof “actually does work to influence people to respond to you and to be more receptive to being recruited.”

Of course, people aren't computers. You can't truly "hack" them, nor should you try to. As Glen reminds recruiters, you won't be successful if you resort to manipulative tactics, and you should never act in a deceptive or unethical manner.

Instead, Glen suggests that recruiters focus on the positive and powerful fundamentals of social engineering, with a core focus on empathy and a genuine interest in learning more about their potential candidates—in order to be able to influence them, appealing to their natural curiosity and human nature, and ultimately stimulating them to take action of their own accord.