Very few people would turn down a vacation to Hawaii (and if you are one them, I am happy to take your spot!). But when it comes to attracting and recruiting professionals, the Aloha State has had a lot more difficulty.

Hawaii is nearly 2,500 miles away from the closest mainland talent hub and for many prospects, palm trees and gorgeous beaches often aren’t enough to justify such a remote relocation and the high cost of living. And with the unemployment rate in Hawaii hovering at a low 2%, local talent is limited, too: nearly everyone who wants a job already has one.

The government of Hawaii had experienced these hiring challenges for decades. On average, their job postings would get only five or six applications and it would take up to two years to fill a role. But in 2015, Todd Nacapuy was hired as the state’s Chief Information Officer and he wanted to buck this trend. 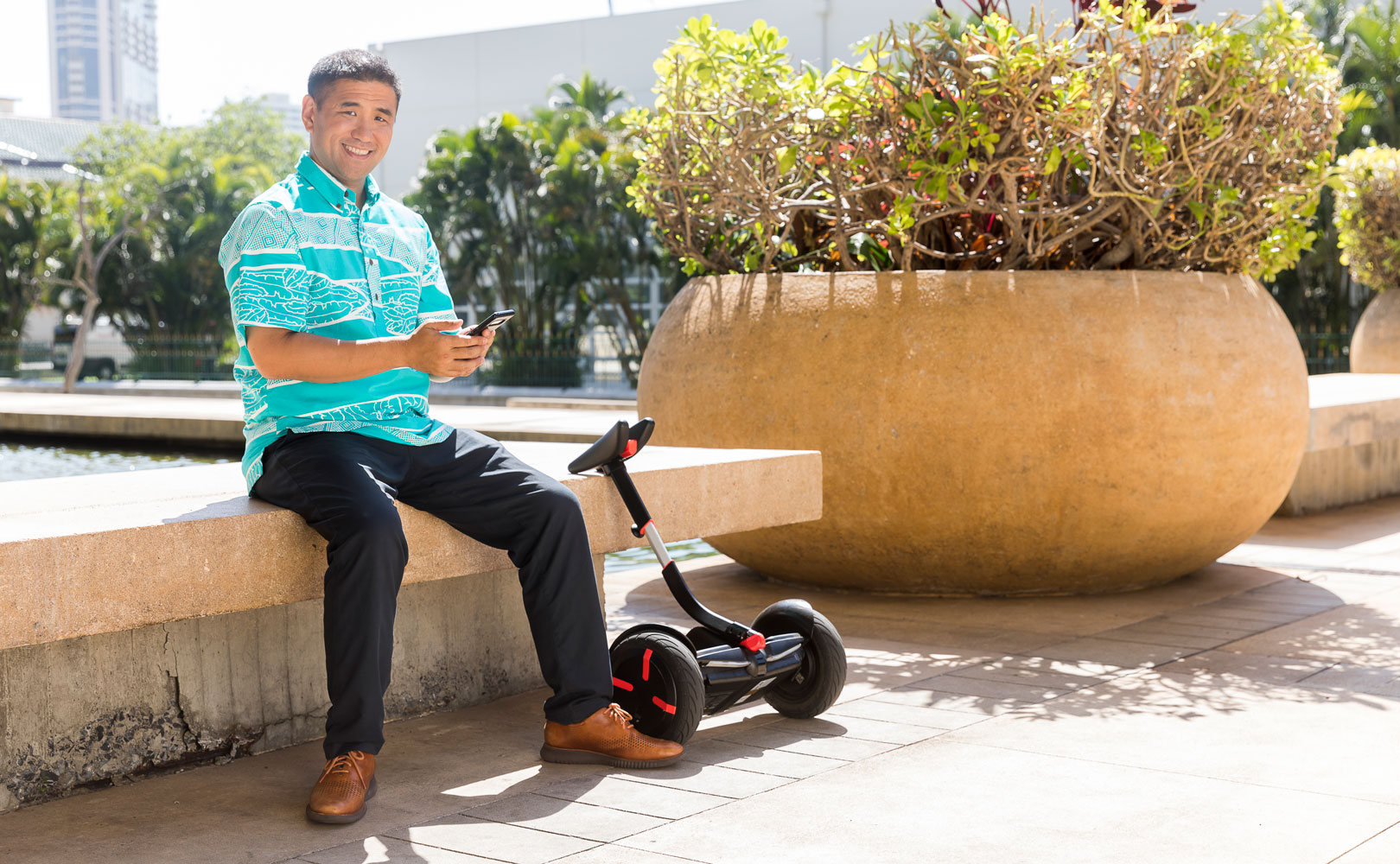 Todd wanted to hire top-notch technical talent on his team and in order to do that, he convinced the government to invest in a major overhaul of its recruiting processes. Starting with transforming his department’s culture, and moving on to investing in recruitment marketing and smart candidate targeting, the government managed to reduce its time to fill to 6 months and make over 60 key technical hires in just a few years.

Hear the team explain this transformation of their Enterprise Technology Services team (ETS):

And here are the specific tactics they implemented:

In a state that doesn’t headquarter any large corporations, the Hawaii government represents a $12 billion organization, employing around 80,000 people, about 40 times more than anyone else. In short, working for the government can have both unparalleled impact and offer enterprise-level experience.

Todd and his HR partner and recruiter-in-chief Jennifer Pegarido took that insight and packaged it into the message that being on their team gives you the opportunity to build a meaningful career with wide impact, not just hold a job. 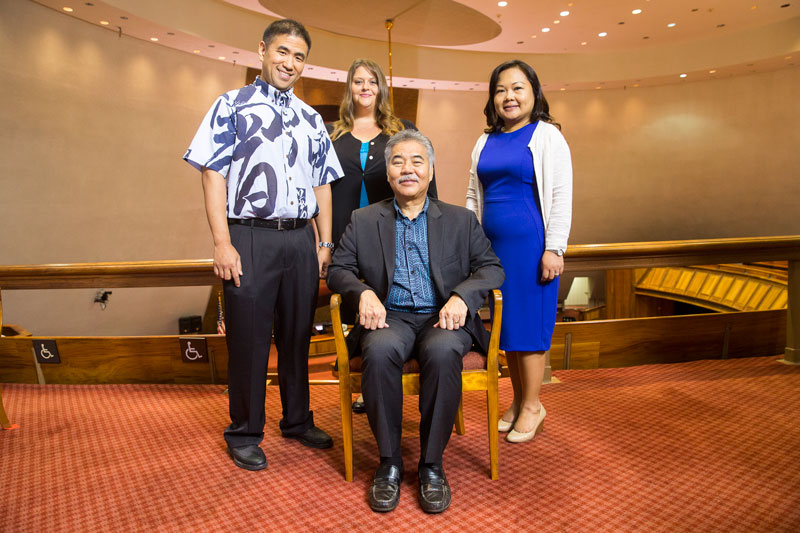 Todd and Jennifer also made sure that once the person is hired, that EVP promise comes to life through heavy investments into professional development of their employees. The organization helps employees map out long-term career plans, identify areas for development, and pursue training opportunities outside the islands (such as mainland conferences). They have even organized a happiness university that coaches employees on work/life balance and leading a more fulfilled life.

2. Shaping a team culture of collaboration and innovation

A great EVP, of course, has to be backed up by strong culture and Todd took the time to define and build out the core values of his team.

True to his background at Microsoft and in early tech startups in Seattle, he encouraged his 180-member team to think like business owners. “We made it okay to fail, and okay to challenge the norm, which was unheard of in the public sector,” he said. “We tell all of our employees to challenge everything. Just because we've done something the same way for years doesn't mean we have to fall into the same pattern. Let's find a better, more efficient way.”

Another core value became collaboration and fostering a mentality that every team member is responsible for making the others around them better, not just focusing on individual excellence. In fact, Todd managed to secure a 4% raise for employees who embodied this value -- a recognition approach that was completely new to the state.

“We’re trying to encourage employees to work with other people, to take down the castles that have been built over the years. It’s really about working with other people and making them better. That’s how you get the 4% raise,” explains Todd.

Creating a solid EVP and attractive team culture were the major pillars of the state’s employer brand. The next step was to invest in promoting this employer brand and letting the world know about the opportunities the government offered.

Todd and Jennifer collaborated with the government PR team and devised a low-budget but effective recruitment marketing strategy. Their core tactics included:

Due to its unique nature, the event generated robust local media coverage and had considerable pick up on social media -- getting the news in front of thousands of prospects and positioning ETS as an innovative employer. 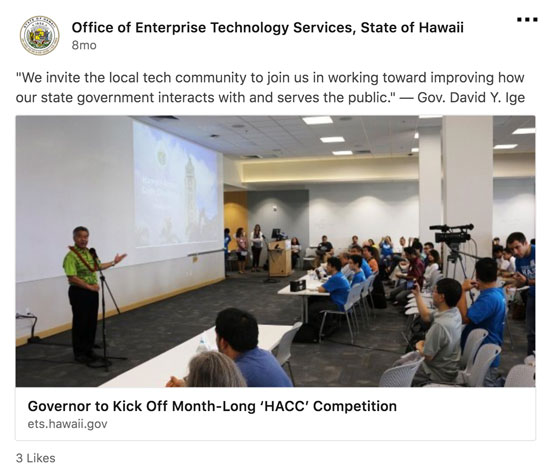 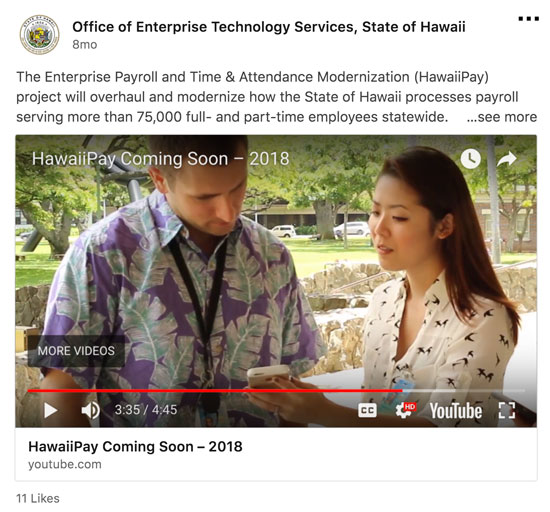 Once the recruitment marketing was in place, Jennifer focused her efforts on improving the effectiveness of the department’s job postings and proactively sourcing talent. Her big wins were:

Now, ETS posts Job Ads on LinkedIn and draws in 60-plus candidates with each posting, including people like Tara who now works on Todd’s team and is featured in the video above. Tara was employed by the University of Kansas when she was targeted by a LinkedIn job post, indicating that her experience put her in the top 10% of candidates. The ad was well-tailored to her background and relevant so Tara applied and shortly after got the job joining the team.

“We like to see if candidates have ties: if they've gone to University of Hawaii Manoa, Hawaii Pacific University, BYU Hawaii or other local universities” says Jennifer. “Sometimes, when I reach out to people, they tell me that they lived in Hawaii before, and they're looking for a way to come home.”

Being able to narrow down her searches this way has both increased her InMail acceptance rate and made the talent pool more manageable. And once Jennifer has a shortlist of candidates, she directly collaborates with Todd in Recruiter, sending him the list of prospects she has selected. “I'll go into Recruiter and quickly review those candidates, then determine who should move on for the an interview,” says Todd. This saves them both time and leads to faster communication with candidates.

With these strategies, ETS managed to shorten its time-to-hire from two years to a couple of quick months. “Now, we bring people on almost as quickly as we can get the paperwork processed,” says Todd.

The number of hires has doubled since ETS began using LinkedIn. What’s more, the IT projects are gathering steam, saving taxpayers money by increasing efficiencies and going digital: all part of the ROI that the government can now harvest from higher salaries and better recruiting.

The state has now begun to expand these new recruitment practices beyond ETS. “There are many job vacancies that we have that are fundamentally important to my being successful as governor,” says Governor David Ige. His goal is to transform Hawaii, and to inspire other states to modernize, too. With these successes, Hawaii is well on its way.