How to Be an Effective Listener

When Tatiana Kolovou had to put in a call to her daughter’s honors-level English teacher, she was surprised by what she heard: A teacher who sounded more like Kim Kardashian than William Shakespeare, and used words like “ya know” and “um” a lot. It turned her off.

Whether it’s your kid’s teacher or a candidate you’re interviewing, a person speaking in that Kardashian tone can trigger a negative emotional response — and that’s the kind of response that Tatiana, a communications expert at Indiana University’s Kelley School of Business, is instructing us to turn off when you’re interviewing. You don’t want your own listening bias (provoked by trigger words or fillers) leading you to the conclusion that “they may not be the right person for our company.”

That’s just one piece of advice in Tatiana’s must-listen (no pun intended) presentation at Talent Connect 2016 on how to become a “high-impact” listener at work, whether you’re engaging with a hiring manager or a new recruit.

Here are six of her essential tips, taken from Tatiana’s presentation:

Listening has three components, and it amounts to a formula Tatiana created.

Great listening is about bringing to bear purpose (the reason that you’re listening) and presence (the kind of vibe you’re presenting), while minimizing your pitfalls (such as mental filters, mental multitasking and others that Tatiana mentions).

As for purpose: Before you start the call or conversation, you want to know exactly what your purpose is. Is it, for instance, to understand every detail, to get the big picture, or to judge whether this person is credible?

And although listening pitfalls (such as triggers and listening bias) can’t be eliminated, Tatiana says, they should be minimized (more on that below).

2. Pick an area where you can improve and concentrate on that purpose

Tatiana lays out the five purposes (or reasons) that we listen. They are… 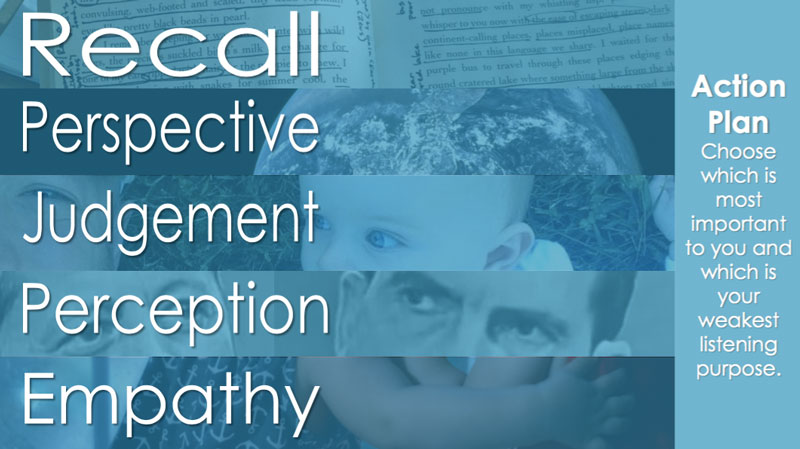 More specifically, the five are:

Tatiana suggests picking one of these five to concentrate on improving. Let’s use perspective as an example. After your conversation, you could ask yourself: “How will this matter in five years?” and “How could I summarize this to someone with an outside perspective?” To further practice, the next time you attend a presentation, try summing up the theme in one sentence after you leave.

As a recruiter, having perspective on a candidate is crucial: You’ve got to be able to tell the stories of the people you’re recruiting to sell them to hiring managers — and that requires catching both the details and the big picture of just who this person is. On the other end of your job, if a hiring manager is unloading a bunch of detailed specifications for new hires, you still have to be able to distill the most important thing: What is the company’s major need that needs to be met here?

For recruiters, another important skill is judging how genuine a candidate is — you’d love to know whether this person truly wants the job or not, and how bad they want it. To improve your judgement skills, Tatiana has some questions you can ask yourself during and after the conversation. They are: 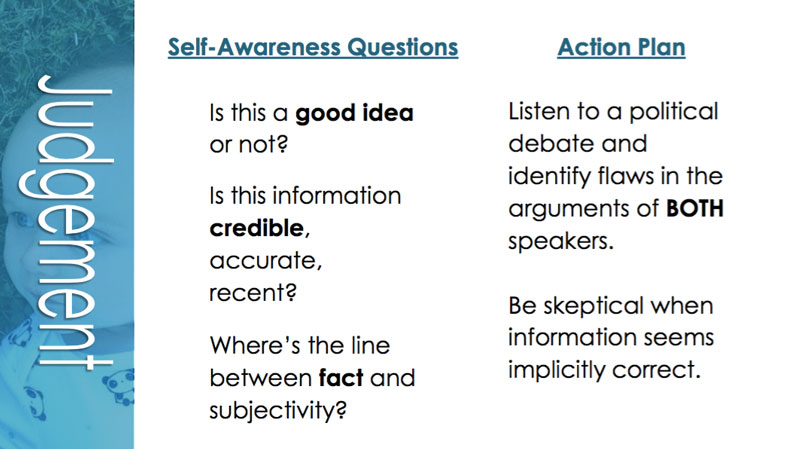 3. Set yourself up for success by practicing in intervals — and at the right times

Don’t go into an important listening session after a greasy hamburger lunch, Tatiana advises. On the contrary, you want to know what times of the day you listen best, so set up your meeting or phone call then. You’ll also want to practice high-impact listening only a few times a day, like an athlete in training, Tatiana says.

The message here is that listening is hard stuff, and you want to build up that muscle. Your goal is to be a high-impact listener two to four times per day, at moments and meetings that really matter — and, like an athlete, you’ll have to build up to that level.

4. Have someone listen to you on the phone and know your listening face

Former President Obama tends to frown when he listens, and Tatiana had a client who was doing the same thing, in addition to putting his hand on his chin. The result? “His staff never wanted to share any good ideas," she says, "because when he went into that listening mode, they felt intimidated and judged without him saying a word.”

So, her advice is to figure out your own listening peculiarities by asking a trusted person on your team to evaluate how you look when you’re listening. If you’re aiming to be relaxed in a professional setting, you may find that out that you’ve actually been looking very anxious. But once you've been given feedback, you can make the necessary adjustments.

Tatiana suggests doing the same self-evaluation on the phone. Over the phone, 80% of your message comes across with tone, not words. Since you’re likely on the phone pretty often, Tatiana suggests getting some objective feedback on how you come across: Ask whether you sound empathetic or if you seem like you’re listening for details.

If you’re not listening very effectively, even leaning in and changing your body position on the call translate to an improved tone, she adds.

5. Be mindful of your pitfalls, triggers, and inappropriate responses

You can’t completely eliminate pitfalls but you can curtail them and be mindful of them. In addition to being triggered by people who speak like millennial celebrities, Tatiana, who is Greek, also hates being called a foreigner. She prefers the title of “academic immigrant.”

She challenges you to ask yourself what your trigger words are and, in turn, what automatic judgements or “mental filters” you jump to in response. When those judgements arise, can you silence them so you can truly focus on listening without judging?

Another pitfall is the “inappropriate response,” which includes actions such as interrupting, making the conversation about themselves, forming an answer early, providing advice, and being critical in the conversation.

In contrast, the best listeners “also have really good responses,” she says, such as nodding, paraphrasing, summarizing, and “being silent when they need to.”

Tatiana closes out by reminding you to make a plan. Come Monday, what is the one area of listening (recalling details, perspective, judgement, perception, or empathy) that you’ll do differently? Then pick two or three situations where you will really focus on improving that skill.

In the end, as you become a high-impact listener, you’ll hopefully notice results, whether you’re better at summarizing your candidates’ stories, better at judging how genuine they are, or really empathizing with your hiring manager’s true needs.

For more tips on how to thrive as a communicator, watch Tatiana's classes on LinkedIn Learning.