Here are five recruiting ideas, trends, and buzzwords that need to go in order for you to be more successful:

1. The term “culture fit”—it can get in the way of diversity, mask implicit bias, and result in a bunch of hires who are exactly like you

One of the most overused terms in recruiting is “culture fit.” It’s not just that it’s vague, it can actually be dangerous. When you hire for “culture fit,” you can end up with a team of employees who are all the same—and that often means they come from the same places, schools, and cultural backgrounds.

That's why companies like Pandora are ditching “culture fit” in favor of “culture add.” Instead of finding candidates who already match the company’s culture, they’re looking for employees who can enhance it by bringing something new to the table.

Zillow’s CEO, Spencer Rascoff, made a similar point in his popular Pulse article If They’re Just Like You, Hire Someone Else. That doesn’t mean you shouldn’t aim for a strong, cohesive work culture—it just means that your culture should be diverse and thriving, not homogenous and insular.  Instead of "culture fit," it's time to start thinking of "culture add."

2. Calling candidate's references—it’s a major hassle for everyone that often amounts to nothing

When was the last time you called a reference and got a brutally honest, warts-and-all assessment of a candidate? Probably never, if you’re like most recruiters. Candidates are bound to give references with nice things to say—the chances of getting real insights are slim to none.

Ed Nathanson doesn’t mince words in his hilarious take-down of reference checks: “Most (if not all) references provided are going to be positive unless the person is a moron -- what is the point?”

Moreover, he adds, most reference checks are never really used in the decision making process: “most companies/hiring managers rarely ever read them (much less perform them themselves – gasp!). They go to some file or ATS purgatory.”

Instead of going through the chore of checking references, limit yourself to basic background checks and spend more time on asking better questions and getting a real sense of the candidate. But if you are determined to give reference a shot, try these tips for getting honest answers.

3. Traditional interviews —they’re predictable, ineffective, and don’t actually tell you how a candidate will perform as an employee

Candidate interviews have been the single most important tool for recruiters since forever, but that doesn’t mean they’re all that great. Google’s Laszlo Bock spilled the beans in 2013 that their analytics showed that interviews were totally useless:

“We looked at tens of thousands of interviews, and everyone who had done the interviews and what they scored the candidate, and how that person ultimately performed in their job. We found zero relationship.”

That’s backed up by a recent, brutally titled article at the New York Times: “The Utter Uselessness of Job Interviews”—but we still rely on them.

Maybe that’s because there’s not a clear alternative to boring, cookie-cutter interviews. Well, you’re in luck: here are five non-traditional tactics that can predict performance (like ping pong duels, fake crises, and sabotaged restaurant orders), and here are four ways to screen for emotional intelligence outside the interview.

Now, we’re not saying you should get rid of interviews altogether. But, you can definitely try to spice them up a bit and add elements that will help you predict candidate fit and performance - here are 10 ways to improve upon the traditional interview.

4. Millennials go ga-ga for purpose-driven companies—except they don’t, they actually care about your culture and perks

Purpose-driven employer branding is all the rage now, and for good reason: it really resonates with candidates… just not the candidates you’d think.

While we have a tendency to think that millennials would be the most drawn to purpose-driven companies (after all, they do prefer buying from brands associated with a cause) they’re actually the least concerned about purpose when choosing an employer.

While 48% of baby boomers believe work should be purpose-driven and 38% of Gen X’ers agree, just 30% of millennials say the same. Instead, they care the most about your company’s culture and values, followed by what perks and benefits you offer. Check out this nifty infographic for seven other insights to help you recruit millennials.

Look at Cisco: not long ago, they were sending out social messages like this:

“#HotJob - Cisco is #hiring an #engineer in #SiliconValley. Join our team.”

Not exactly thrilling. Or personal. Or human, at all. 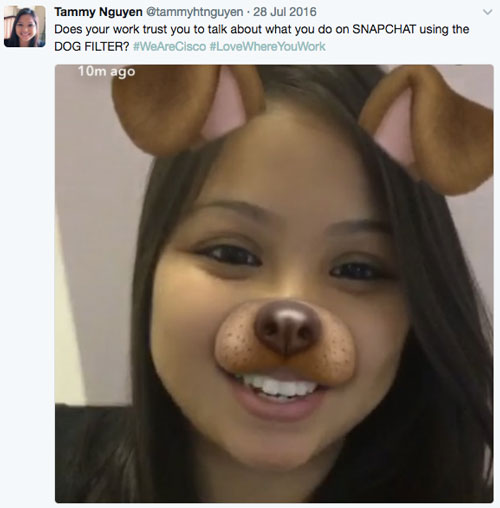 Their Twitter followers exploded by 400% in those six months. Cisco says their new approach to employer branding boils down to one word: trust.

Like the mullet, some things must come to an end. Killing these recruiting misconceptions won’t just make your team more effective and efficient—they’ll also help you stand out from the crowd and provide a killer candidate experience.