GoDaddy had a lot to be proud of. In just a few years, it had reinvented its brand —gone were the racy commercials that had turned women away. In fact, the company has become an industry leader for hiring women in tech roles — by 2015, more than a third (39%) of all engineering interns and new graduate hires were women.

But internally, GoDaddy realized that they still had a work to do for women at the company—unconscious bias still played a big part in talent acquisition, evaluations, promotions, and compensation. Few female engineers advanced to leadership roles—and when they did, it was much slower than their male peers.

Because of this, they realized they need to make some changes. Speaking at a recent conference, GoDaddy’s VP of Engagement & Inclusion Katee Van Horn shared a series of internal process changes the company made to decrease bias at every stage of employment and give everyone an equal opportunity.

Here’s what they did:

1. Identified where bias showed up and the effects it was having on diversity

GoDaddy hired the Clayman Institute to find out how serious the bias issue was. It turned out to be “everywhere,” said Katee, impacting “how we were selecting, promoting, and rewarding people.”

“They were less likely to be rated as top performers,” said Katee, who goes on to recount that back then, no one thought twice about calling an ambitious woman “aggressive.”

“Your stomach hurts, because you’re like, ‘Would you be saying the same thing if she were a man?’” said Katee. What’s more, after applying this double standard, managers weren’t giving women the feedback they needed to work on their so-called flaws.

GoDaddy wanted to do everything it could to eliminate the bias—and to do it consistently.

2. Developed guiding principles to give every employee a fair review

To level the playing field and give all employees ample opportunity to move up, the company developed six guiding principles: 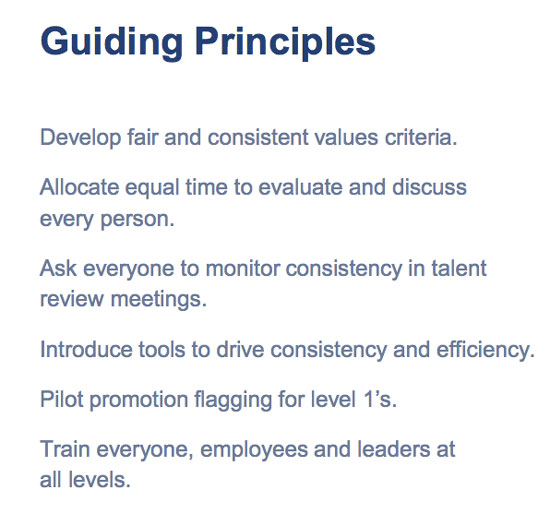 During evaluations, GoDaddy now empowers every employee to monitor for fairness. All team members are tasked with questioning bias—and pointing it out in every instance. The company has also increased training at all levels, including for leaders.

3. Changed how employees are evaluated based on the company’s core values

GoDaddy wants to hire people who are extraordinary, but wasn’t sure how to test for that quality. After some discussion, the team boiled it it down to three core values that they felt their team embodies:

Their typical approach had been to measure performance versus potential. But they realized there was a problem with this.

“Guess what potential is? That’s where the manager gets to put a lot of bias into what they think!” Katee explained. “So our first iteration was to change [what we measured] to the what and the how. What are candidates actually delivering on, and how are they delivering it—the how being our values.”

Moving away from the vague concept of potential, the team now wants to know things like whether a candidate takes smart risks, strives to be better, and shares what they know with others.

4. Created scorecards for all evaluations, and made sure everyone gets reviewed for the same amount of time

To ensure the core values are being tested for, the team built an evaluation scorecard, with questions designed specifically to measure goals and effectiveness, objectively. Each employee is now allotted equal evaluation time—using timers to keep things in line.

In the new system, at intervals corresponding to seniority (12 or 24 months), managers get a flag to remind them that an employee is up for promotion. Promotions are such a driving force that every employee who doesn’t get one understands exactly why—and has been given a specific set of goals to complete, and a timeline in which to complete them: 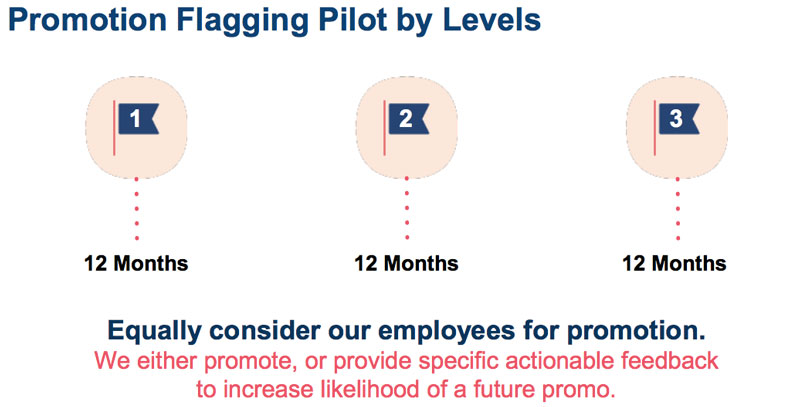 The results—and how to replicate them

After implementing these process changes, not only were women suddenly getting great feedback, most employees now know where they stood with the company:

The percentage of women on the top performer list—the list of people most likely to get promotions—immediately supplanted men by 4%:

“These are huge wins,” said Katee. “You look at that, and you go, ‘Wow, we’ve actually helped the leaders get it and understand how to block bias….and why it matters.’”

In 2015, style comments during reviews proliferated—and aligned neatly to gender stereotypes. In 2016, they all but disappeared, with 1% of men still receiving style criticisms: 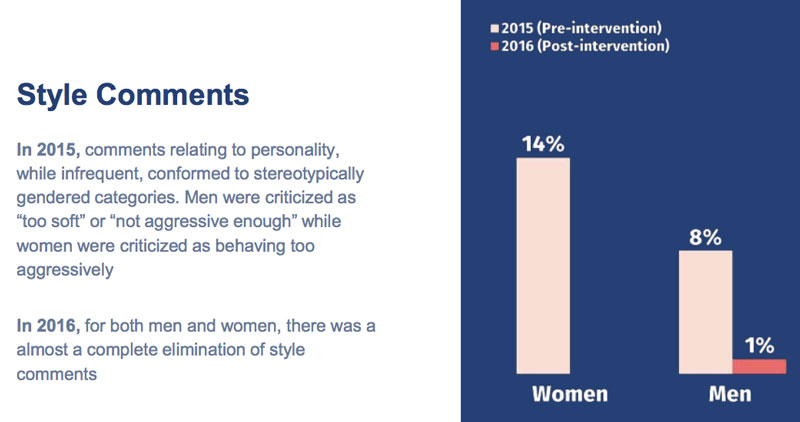 Finally, a leader survey showed that the new scorecard makes reviews both simpler and quicker:

“We made it easy from them. We made it so they could go through this process very quickly [rather than dreading it]. Giving them something that takes five minutes per employee was huge,” said Katee. Things are not perfect, she added, but we have moved the needle, and we’re headed in the right direction: 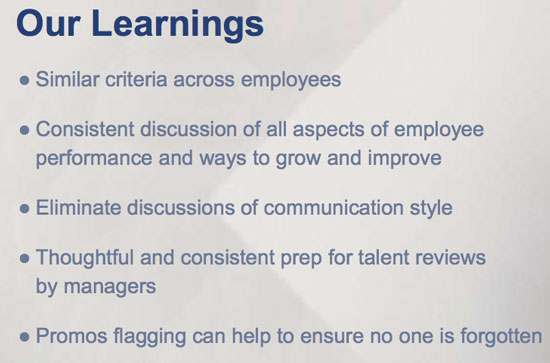 In parting, Katee had these words of advice for other organizations.

“Make sure you have your executive team on board. I think I can speak for most of you when I say that here in the Valley, most of your executives will understand why you want to have this conversation,” she said.

Katee also recommended working with partners: both outside vendors (like the Clayman Institute) and internal change champions. “It’s scary, but it’s a great way to look at the data,” she said.

She advised focusing on one aspect of the organization, rather than everything. “Don’t boil the ocean,” she said, adding that talent acquisition experts might be focused on diverse hiring, but reducing bias within the culture engages that same talent to stay put, once they’re in.

She also recommended patience. “Start where [leaders] are. You’ll have these conversations over and over again….[Some] folks just don’t know. That’s okay,” she said.

“There’s never an end point,” she concluded. “We’re humans. There’s always going to be some challenge we’re tackling next. But if people are saying ‘I get it,’ [then] that’s a win.”

You can listen to the full recordings of Katee’s speech here.